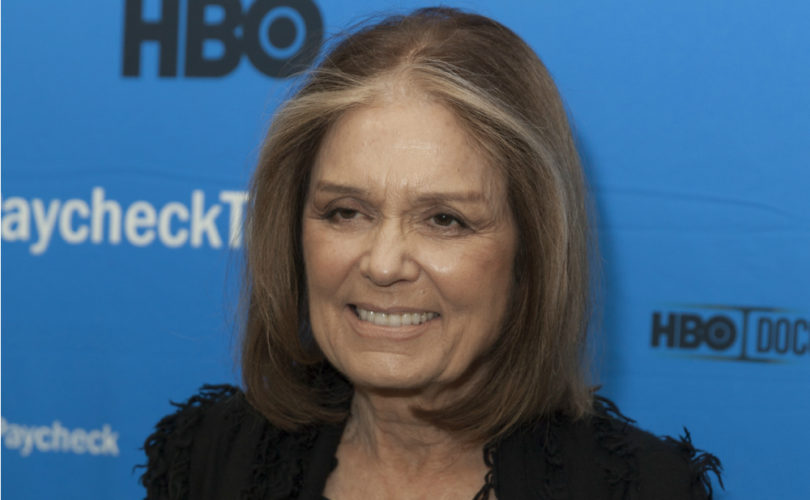 DE PERE, WI, April 30, 2015 (LifeSiteNews.com) — Despite pronounced disapproval from the local bishop, a Wisconsin Catholic college hosted a notorious pro-abortion feminist to talk about “social justice,” and it’s not the first time the school has given a platform to speakers who vehemently oppose Church teaching.

St. Norbert College in De Pere presented Gloria Steinem last week, along with another pro-abortion activist, bell hooks, according to a report from Fox 11, as part of a discussion on the history of the women’s movement as it may pertain to domestic violence.

Steinem became the face of the feminist movement beginning in the late 1960’s, and has been an outspoken abortion proponent throughout her career.

Green Bay Bishop Davis Ricken was not initially informed by the college of its plans to host Steinem, and he expressed displeasure at the prospect, responding in his regular column to the many people who had contacted him to see if he approved of the college’s decision to host the pro-abortion feminist.

“I want to let you know that not only did I not approve of such a decision,” Bishop Ricken said, “I did not know about it.”

The bishop told his readers that as bishop, he has the responsibility to ensure the Catholic identity of the Catholic colleges in his diocese.

Steinem had spoken at the college, in the 1970’s and the 1990’s, and in 2008 St. Norbert welcomed pro-abortion Hillary Clinton during her presidential campaign.

Bishop Ricken also confirmed in his statement on the matter that he had conveyed his strong disapproval of this most recent Steinem appearance to the college’s abbot and president, and the chair of the Board of Trustees.

Both Steinem and bell hooks are outspoken in support of abortion.

“It [abortion] is supposed to make us a bad person. But I must say, I never felt that,” Steinem has said of her own abortion nearly 60 years ago. “I used to sit and try and figure out how old the child would be, trying to make myself feel guilty. But I never could!”

Hooks wrote in her book Feminism is For Everybody, that “without the right to safe, inexpensive, and free abortions [women] lose all control over their bodies,” and she stated that “one cannot be anti-abortion and an advocate of feminism.”

“I understand that Gloria Steinem will not speak about abortion,” Bishop Ricken had said about Steinem’s impending visit. “Really, she doesn’t need to. Her whole career and life is a grand affirmation of the pro-abortion movement.”

Steinem was asked at the April 21 St. Norbert appearance how she became a feminist, and she said it was when covering an abortion hearing as a journalist in the 1960s.

“If one in three of us in this nation, then and now, has had this experience [of abortion] at sometime in our lives, why is it illegal, why is it dangerous? Who owns women’s bodies, who says we can’t control our own reproductive lives?”

St. Norbert College President Thomas Kunkel said even though the college is Catholic, it should present all sides of an argument.

Kunkel had received complaints from more than 300 alumni, students, and parents about Steinem’s appearance, but stood by the decision, stating, “This is just one of those things we have a difference in opinion about.”

“I respect where people are coming from on this,” Kunkel said. “But we feel that we are a college and part of what we do is you have people from all walks come to campus. It doesn’t mean that you necessarily endorse everything they say or what they stand for.”

“Catholic vision and teaching are truly liberating if they are integrated into the life of a college campus,” Bishop Ricken said. “How refreshing it would be if St. Norbert College were to decide to be a vibrant Catholic College that embraces the Church and her teaching in its entirety, not just the social justice teachings (which SNC does so well), but also the doctrinal and moral teaching of the Gospel and the church.”

“Rather than excusing it by finding ways to reason around it or to argue against it,” he asked, “why not embrace it with a real and comprehensive intentionality?”

The campus pro-life group Knights for Life was reportedly among a handful of protesters outside the St. Norbert Steinem event, but the students in the group did not want to speak on camera, instead releasing a statement.

“While we strongly disagree with Ms. Steinem’s outspoken support of abortion, we affirm her humanitarian work in regards to raising awareness around domestic abuse,” it said.

“When it comes to protecting life in all of its stages, from conception to natural death, including the horror of domestic abuse, the secret desire of all of our hearts is to build a ‘civilization of love,’” said Bishop Ricken. “Such a civilization can only be built on fundamentals, especially that every human being ought to have a chance at life.”

The bishop had said he found the Catholic college’s invitation for Steinem to speak to be “quite mystifying,” given the rise in domestic violence in the U.S., and the fact that what’s been tried in this area in the last 40 years has not worked.

“Why would St. Norbert, a Catholic college, invite someone who is such a high profile and well-known protagonist and activist of abortion rights to weigh in on the causes and contexts of a dramatic increase in domestic violence in the United States?” Bishop Ricken wanted to know.

“One cannot really advance the rights of women while taking the life of an innocent child in the womb,” he said. “One cannot protest domestic violence outside the womb and be in favor of violence and denial of life in the home of the womb.”