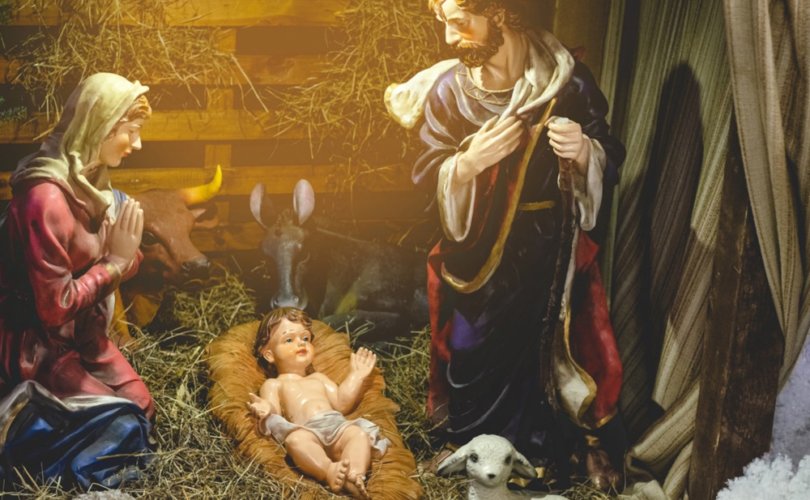 December 24, 2019 (LifeSiteNews) — Above are the words that should always be on our lips, not only during Christmastide, but throughout the year when we greet each other. Such a mystery that our sins and failings have brought to us such a mighty Savior! By the birth of Jesus in a manger where animals fed, Our Lord quite literally becomes food for us, giving Himself so entirely to us that His Body and Blood mingle with our own.

God becomes man so that mankind can become like God. This theosis or divinization does not imply that men become gods, but that they become thoroughly imbued with God through a transformative process of adhering to God throughout life. St. John Paul II frequently referred to this in his many homilies and messages. For example, he said in his 1996 apostolic exhortation Vita Consecrata, “Do not forget that you, in a very special way, can and must say that you not only belong to Christ but that ‘you have become Christ’!”

It is there that I find my daily challenge and task. As a correspondent for LifeSiteNews, I often write about the many controversies within the Church, as well as the apparently inexorable slide of much of the world into a post-Christian morass. But rather than being chastened by such news, we must be emboldened to take action and gird ourselves with hope and shield ourselves with faith.

I am heartened by the words of St. Paul to Timothy, in which the saint exhorts him to exercise his prophetic ministry even in the face of the indifference and “itching ears” among those who have abandoned the true faith:

I charge thee, before God and Jesus Christ, who shall judge the living and the dead, by his coming and his kingdom: Preach the word: be instant in season, out of season: reprove, entreat, rebuke in all patience and doctrine. For there shall be a time when they will not endure sound doctrine but, according to their own desires, they will heap to themselves teachers having itching ears: And will indeed turn away their hearing from the truth, but will be turned unto fables. But be thou vigilant, labour in all things, do the work of an evangelist, fulfil thy ministry. Be sober. (2 Timothy 4)

All of us at LifeSiteNews pray daily in thanks for the many benefactors who make our work possible. Nothing good comes without sacrifice. We pay tribute to all those who give of themselves so that not only are the world’s controversies aired, but the Good News is broadcast to the world.

In joining my colleagues at LifeSiteNews, I pray for many blessings for all of our readers and donors, and even our detractors, in the confidence that God’s love became a man in a lowly stable so that all might live with Him.