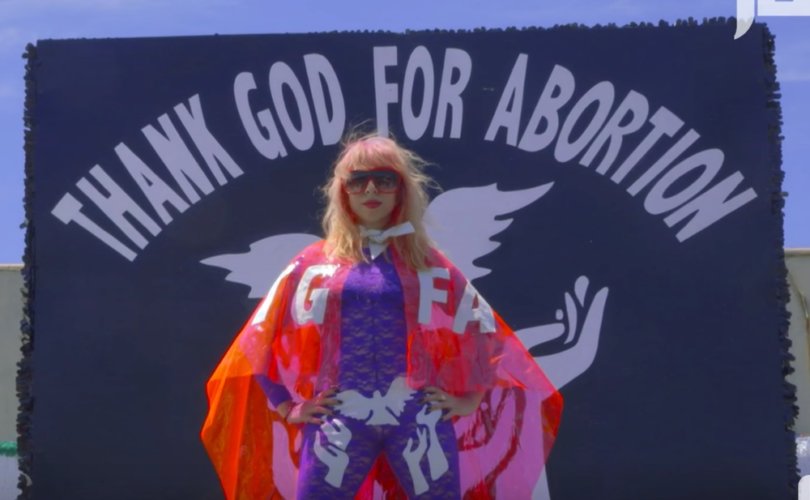 July 9, 2018 (LifeSiteNews) – In the latest break from the “safe, legal, and rare” rhetoric of past abortion supporters, two recent celebrations of abortion have received attention for hailing the lethal practice as a positive good, and invoking the Creator in the process.

The video shows activists waving large black “ABORTION” flags and people dancing on the float with “LEGAL, SAFE, FREE” emblazoned on their shirts. Throughout the video, she called abortion a “human right” connected with the LGBT agenda under the umbrella of “autonomy,” and suggested that her project was a “march in celebration of independence from a police state.”

Also on the pro-abortion float was a “F*** ICE” poster in a nod to the left’s recent campaign to completely abolish the agency that handles the U.S. border patrol and customs.

“I celebrate your right to have 20 abortions. I’ll throw you a party. Or zero. It’s a celebration,” said Ruiz, who has had two abortions. “There’s a release, I think, that happens with the project – to see it out in the open, to see it joyfully claimed, and to have God in it.”

At one point in the video, Ruiz wears a giant yellow crown reminiscent of Christian imagery of the Virgin Mary. Plastered across the headpiece is simply, “ABORTION.”

On Sunday, comedian Michelle Wolf devoted a segment of her weekly Netflix show The Break to promoting abortion-on-demand. Wolf drew bipartisan criticism in March for a performance at the annual White House Correspondents’ Dinner in which she joked that Vice President Mike Pence “thinks abortion is murder. Which, first of all, don't knock it 'till you try it – and when you do try it, really knock it.”

This week, Wolf delivered a monologue [content warning] hailing abortion as a “good and important” woman’s right. She accused pro-lifers of wanting to control women, a common trope despite the prevalence of female pro-life leaders and polling that finds no significant gender gap between male and female abortion attitudes.

Between vulgar and ghoulish jokes, Wolf recited a number of common pro-abortion talking points, without citing evidence to substantiate them.

“Some people say abortion is killing a baby,” she said, gesturing quotation marks around the phrase. “It’s not. It’s stopping a baby from happening. It’s like ‘Back to the Future’ and abortion is the DeLorean,” the time-traveling car from the 1980s sci-fi film.

“And everyone loves DeLoreans!” she exclaimed.

In fact, long-settled biological criteria establishes that a whole, distinct, living human exists once fertilization has occurred, as confirmed in mainstream medical and science textbooks and admitted by several pro-abortion philosophers.

“These people are anti-abortion, which means they’re anti-woman,” Wolf continued. “If these people were actually pro-life, they would be fighting hard for healthcare, child care, education, gun control, and protecting the environment.”

Abortion advocates regularly accuse pro-lifers of insincerity for not adopting left-wing positions on a variety of unrelated policy issues with debatable solutions.

“One of the original slogans for the woman’s movement was ‘abortion on demand,’” Wolf declared despite the fact that many early feminists such as Susan B. Anthony and Elizabeth Cady Stanton forcefully opposed abortion.

“And that’s exactly what it should be,” she continued, “as easy and safe as pushing the on-demand button in the middle of your remote to order ‘Paddington 2.’”

Wolf’s call mirrors the Democratic Party’s increasing radicalization on the issue over the past several years; its official platform dropped language calling for abortion to be made “rare” in 2012, and added language demanding the federal nullification of state pro-life laws in 2016.

The comedian went on to call men’s opinions on abortion “very irrelevant,” suggested men were troubled by the fact that “women are naturally equipped to do the most powerful thing in the world: give life,” and accused men of being “uncomfortable” with not being able to “control women.”

“Abortion shouldn’t be a luxury, it shouldn’t be the new ‘I summer in Montauk,’ it should be on the dollar menu at McDonald’s,” she said. Later, she inadvertently contradicted herself on the difficulty of affording abortions by saying it’s “actually a great deal. It’s about $300 – that’s like six movie tickets.”

Wolf concluded the segment with a “salute to abortion,” in which she donned a star-spangled majorette’s costume, was flanked by a drum corps, and threw confetti while making declarations like “abortion, I salute you!” “if you want an abortion, get one!” and her closing line, “God bless abortions and God bless America!”

Neither Ruiz nor Wolf elaborated on how they concluded God would approve of abortion. The Bible repeatedly condemns “murder” and “shed[ding] innocent blood” as “detestable to” the Lord, because “in the image of God has God made mankind.”