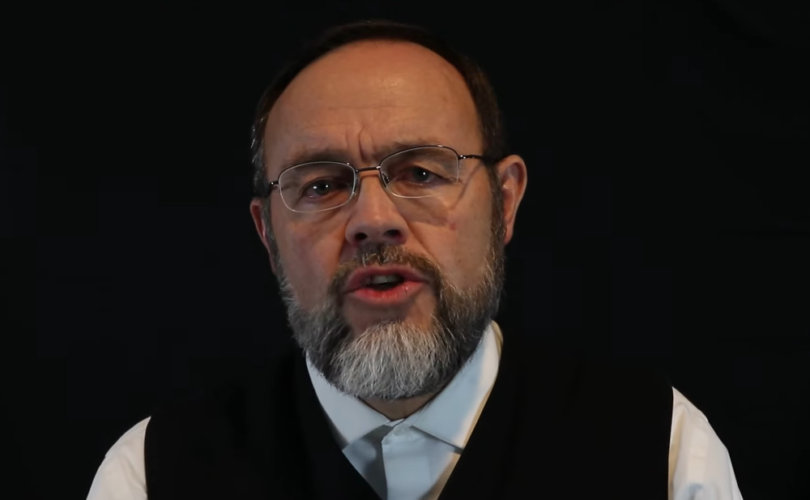 AYLMER, Ontario (LifeSiteNews) – Outspoken Ontario Canadian Christian Pastor Henry Hildebrandt told truckers in the freedom convoy headed to Ottawa to protest COVID mandates that “God is on” their side and to stay “focused” and not be intimated by detractors.

“Please stay focused, stay united. Don’t let any people infiltrate among you that will aggravate you or provoke you to violence. Don’t do it. Stay focused. Stay united. God is on our side,” said Hildebrandt in a video address to the freedom convoy truckers yesterday.

Hildebrandt added that the truckers, whose numbers are estimated to be in the tens of thousands, are “standing up for our God-given freedom.”

“We must stand the course and we will stand truckers. We will wherever we can wave to you, support you. Thank you.”

Hildebrandt’s Church of God, located in Aylmer, Ontario, has racked up $274,000 in fines in total since the start of the COVID crisis and the lockdowns rules that ensured.

He recently said that faith leaders who oppose COVID lockdowns and mandates are “not careless” but that they will “not bow” to oppressive rules limiting their right to worship.

Hildebrandt’s message of support for truckers came at the same time the “Freedom Convoy 2022” group has come under attack by Canadian Prime Minister Justin Trudeau as well as the mainstream media.

Yesterday, Trudeau called the thousands of truckers in the freedom convoy who will land in Ottawa this weekend, along with the millions of Canadians supporting them, a “small fringe minority.”

Interestingly, Trudeau announced today he was going into isolation for five days after claiming someone close to him tested positive for COVID, meaning as the convoy rolls into Ottawa, Trudeau will be nowhere to be found.

The group has stated they are not “anti-vaccine” but rather “anti-mandates” of all kinds.

After the Canadian Trucking Alliance (CTA) said it “strongly” disapproves of the thousands of truckers driving to Ottawa this week to protest COVID mandates, the “Freedom Convoy 2022” truckers’ group blasted them as a “spineless” association that does not “speak” for them.

The group recently listed its “demands” it wants to be met by the government of Trudeau after it arrives in Ottawa this weekend.

The demands include removing “all vaccine passports, including inter-Canada passport systems,” along with eliminating all “mandatory programs of vaccination and contact tracing.”

The convoy has no official leader, but a “Freedom Convoy 2022” Facebook and GoFundMe group has raised over $6.3 million in under two weeks.

Freedom Convoy may be the largest ever in Canadian history

Despite Trudeau’s claims the trucker convoy is a “fringe” protest, when the convoy passed through Winnipeg, Manitoba on Tuesday, some estimates put the convoy at over 100 kilometers in length.

The reality is it is made up of thousands of Canadians who are “slow-rolling” to Ottawa this weekend to protest the  draconian COVID jab mandates and rules imposed by Canada’s government.

According to the Guinness Book of World Records, the longest truck convoy ever recorded in the world was in Egypt in 2020, of 480 trucks, with an approximate length of 7.5 kilometers.

Some estimates put the total amount of truckers in Canada’s caravan at well over 50,000 trucks, cars, RVs, and busses, and more than half a million people.

The convoy has gained support from law enforcement, such as Durham Police Constable Erin Howard, along with many Conservative Party of Canada politicians, despite their leader Erin O’Toole staying mostly silent on the matter.

Canadian trucking companies have already reported driver shortages as a direct result of the COVID jab mandate for all haulers crossing the border.