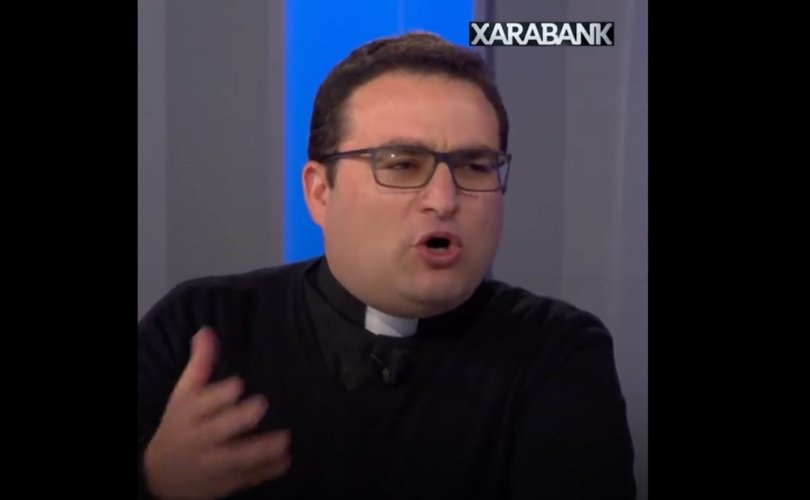 March 15, 2019 (LifeSiteNews.com) – Charles Scicluna, the Archbishop of Malta and Pope Francis’ point man on the sexual abuse crisis, recently sent a priest to speak in his stead on a popular Maltese television show who stated that God “created” people as homosexuals, and that homosexual relationships are not condemned by the Church but are seen as legitimate forms of “love.”

The priest’s statements, which were given in translation to LifeSite by an anonymous Maltese source, directly contradict the Catholic Church’s perennial teaching condemning all sexual acts outside of natural sexual intercourse between a man and a woman in marriage.

The Catechism of the Catholic Church teaches that homosexual acts are “intrinsically disordered” and constitute acts of “grave depravity” that can never be approved, a doctrine that originates in the Scriptures and is repeatedly upheld in papal encyclicals and documents from the Congregation for the Doctrine of the Faith.

According to the Facebook page operated by the producers of the popular interview program “Xarabank,” following the interview the producers were asked by viewers if Archbishop Scicluna was aware of the priest's pro-homosexual declarations. The producers responded that they had invited Scicluna to come himself to speak on the topic of homosexuality, but that Scicluna had declined and instead recommended the priest for the show.

“I am going to tell someone else to come instead of me, because he is very good at answering the questions that you wish to ask. His name is Fr Kevin,” stated Scicluna, according to the producers of the show.

The priest’s comments are particularly significant given that Archbishop Scicluna is an official of the Holy See and Pope Francis’ point man on the sex abuse crisis.

Fr. Kevin Schembri, a theologian and jurist who teaches at the University of Malta, was brought on “Xarabank” at the suggestion of the archbishop, to respond to two Evangelical Protestant Christians, one of them an ex-Catholic, who had abandoned the “gay” lifestyle out of obedience to Christ and now said they have attractions to the opposite sex.

Asked if being “gay” is “bad” in the eyes of God, the priest responded, “It cannot be something bad, because he created it. God created it, and he created it in his plan. Therefore to be gay, meaning when a person in the depth of their heart recognizes that he or she is a person who is gay or lesbian, that person is recognizing how God created them.”

After being shown a clip of the two Evangelical Protestants who had vigorously defended their choice to reject homosexual behavior on the show a week earlier, Schembri was asked to comment. He responded that he who tries to deny his “gay” identity is “harming himself” and implied the two Christians have “internalized homophobia.”

“Do those who are gay and Catholic, need to change?” asked the show’s host, Peppi Azzopardi, noting that one of his guests the previous week “told us that by and through Christ he is changing.”

“No,” responded Schembri. “If he recognizes that he is a gay person as created by God, he does not need to change. Rather, I would dare say, he would be harming himself if he tries not to accept himself or herself as they are as a gay person, and sometimes this, but this would take much more time to discuss, this is where what we call ‘internalized homophobia’ comes in.”

“Because you don't accept yourself so much, or parents don't accept this reality for example in their children so much, that it creates so much frustration, because it's not a joke that you do not accept who you truly are, if you truly are like this,” Schembri added.

A video containing a complete English translation of the interview with the two ex-gay Christians, Matthew Grech and Kylie Delia, can be found here.

Schembri responded that the two Protestants “are not coming from the Catholic tradition. Even the way they perceive the Bible, they do not see it the way we do.”

“St. Paul was not writing there to the Corinthians about gays as we understand them today, when we are talking about persons who acknowledge that they had a different sexual orientation, or persons who for example, are living an experience of  love, which is sincere, and who are authentic towards themselves,” claimed Schembri.

Asked about the Book of Genesis, which states that God made man and woman, Schembri responded: “So that God created man and woman is not contradictory to the fact that there is a percentage, it's much smaller than those who are straight, who are also gay. Apart from that, we don't forget something else. Whoever is gay or lesbian, is also a man and a woman. So the gay is a man with a sexual orientation, and the lesbian is a woman who has a lesbian sexual orientation. So God created them man and woman. So it is not contradictory. “

Schembri’s words expressly contradict the Catechism of the Catholic Church, which notes that “Sacred Scripture . . . presents homosexual acts as acts of grave depravity.”

Schembri teaches theology, liturgy, and canon law at the University of Malta, and coordinates master’s degree programs relating to family and marriage.  He is also defender of the bond and promoter of justice at the Metropolitan Tribunal of the Archdiocese of Malta.

LifeSite requested Archbishop Scicluna’s comments on the priest’ views, but received no response by publication time. No clarification has yet been published on the website of the Archdiocese of Malta.  Fr. Schembri also failed to respond to a request for an interview.

The Schembri interview is the latest in a series of recent capitulations to the homosexual agenda on the part of Archbishop Scicluna.

In 2014, Scicluna celebrated a mass for an “LGBTI” organization that endorses homosexual unions, and began to permit it to meet in Catholic parishes, retreat centers, and on Catholic university campuses. Scicluna even posted a photo of himself with members of the group presenting him with their book, “Our Children,” on the archdiocesan website, and endorsed the book’s contents.

In February 2016 Archbishop Scicluna suddenly reversed his initial condemnation of a proposed law to outlaw conversion therapy for patients suffering from homosexuality, and took the LGBT position that all such therapy “goes against human dignity” because it treats homosexuality as a mental illness. He also repudiated the document’s association of the “gay” lifestyle with pedophilia.

“I approved the document for publication but it is not my document,” Scicluna told the Times of Malta. “It is the document of the Church in Malta but it is the responsibility of the signatories. I want to reassure [the gay community] that we are dead set against conversion therapy because we believe, as they do, as government does, that it goes against human dignity. We do not subscribe to beliefs that describe gay people as sick. These are labels that demean them. And certainly we are not going to associate gay people with pedophilia.”

That same year, Scicluna began publicly endorsing same-sex civil union legislation, while continuing to oppose homosexual “marriage.” In a video interview, Scicluna said that such unions are a “service to the dignity of these people” and added, “I think that we should support legislation that gives same-sex partners their dignity and their social protection.”

In 2017 Scicluna and the other Catholic bishop of Malta rejected a newspaper ad by Catholics United for the Faith opposing a bill to create homosexual “marriage” and repeating the Catholic doctrine that homosexual unions are contrary to nature. Scicluna and the other bishops called the ad “propaganda” and separated themselves from its message. “The Archdiocese of Malta . . . is not in any way involved with the propaganda by the Maltese Catholics United for the Faith,” stated the bishops. Scicluna and the other bishops issued their own statement on the 2017 general election taking no position on homosexual “marriage,” and only encouraging Catholics to vote in accordance with their consciences.

Scicluna’s recent capitulation to the homosexual agenda represents a complete turnaround regarding his previously-stated views on the subject. Under the papacy of Pope Benedict, Scicluna publicly condemned an initiative to create homosexual “marriage” in Malta.

Scicluna made headlines at the Vatican’s recent sex abuse summit when he claimed that the sex abuse crisis in the clergy has nothing to do with homosexuality, despite the fact that the overwhelming majority of cases of sex abuse by priests are committed against post-pubescent boys and young men.

The summit, which was organized and supervised by Scicluna, did nothing to address the issue of clerical homosexuality, despite being scheduled on the feast day of St. Peter Damian, a Doctor of the Catholic Church famous for his scathing critique of sodomy in the priesthood and the sexual abuse of “spiritual sons” by priests.

Scicluna has maintained a close relationship with Pope Francis and has functioned as his point man in carrying out investigations of sexual abuse, a role that he also carried out under Popes John Paul II and Benedict XVI. He has fully embraced Francis’ promotion of Holy Communion for those who are adulterously remarried, issuing guidelines in 2017 that allow such adulterers who believe they are at “peace with God” to receive communion. The guidelines contradict the Code of Canon Law, which prohibits anyone “obstinately persevering in manifest grave sin” from receiving Holy Communion.

Contact the author of this article at [email protected]