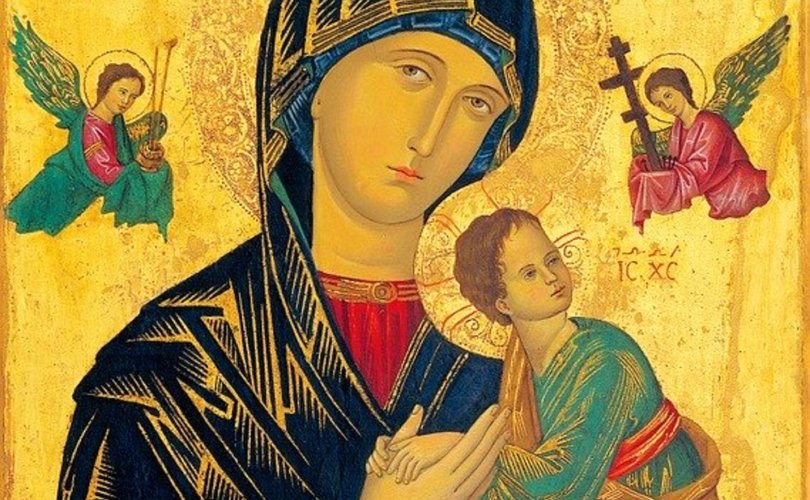 Our Lady of Perpetual Help

I will always remember last Christmas as small and quiet, huddled with my wife and our firstborn son. He had come shortly before Advent. Our little family had also just climbed up out of Hell on Earth.

We had chosen our obstetricians for their renowned Catholic piety. We were deceived: throughout the labor, they abused us — my wife, my son, even myself — in unspeakable ways, physically and psychologically. When they had finished, and our baby was born healthy but smaller than they wanted, they left us imprisoned in their pet hospital. We languished there for many days, and nurses and pediatricians manifested one by one before us, constantly, making demands.

He must pass this test. That was their message, and they would stab our baby’s foot to scrutinize his blood. Or we will take him away from you.

Over and over we heard it, or we will take him away from you, and they stabbed his feet again, and he screamed, and my wife cried, and I wrung my hands and made phone calls, and we clutched our son and tried to hold him close and feed him when they weren’t watching, because they had forbidden my wife to feed him.

I had mentioned that this story is about miracles, and it is, because we experienced so many.

When the nurses stabbed my son in the foot again and demanded a number — or we will take him away from you — I begged St. Veronica for help. She answered: just then the number came up, and they left us alone.

When the doctors opened up my son’s diaper — if we don’t see what we want, we will take him away from you — I begged St. Alexius for help. He answered: just then they saw, and they left us alone for a time.

And when the pressure intensified, and we needed a lawyer, God sent not one, but three.

Over and over, I sent up pleas to Our Lord, Our Lady, certain saints, in desperation. Every time, the moment my words went up, those holy men and women lent their hands and their prayers to my poor, tiny son, and he passed the test.

Eventually, they took him away from us anyway.

We baptized him by emergency as they reached for him, for fear we’d never see him again. They pierced his hands with needles and tubes, only to remove them immediately after. They isolated him in a box and condescended to let his mother hold him sometimes, while they forced me away each night. They posted armed guards to squash any chance of our rescuing him.

I think of my humanly, imperfectly innocent son and remember the divinely, perfectly innocent Christ child, born around the same time of year and unstained by sin into adulthood. Our Lord’s life, too, was full of miracles. He passed every test the Pharisees and Scribes imposed on him. But the mob took Him from His Blessed Mother nonetheless. They pierced His hands and feet — His feet, which may have looked as though He’d walked on broken glass, as my tiny son’s did. They isolated Him on the cross. With the backing of the all-powerful and godless state, the greatest country in the world, they murdered Him and had armed guards posted outside His tomb.

Eventually, wise as serpents and simple as doves, we escaped that place. In time for Christmas, I crawled, like Orpheus, up out of Hades — blessed, unlike Orpheus, to deliver my wife and son with me.

A year later, we still remember the miracles. In our imprisonment, as we shielded our baby, God rained down undeserved favors on us, because we begged for them. Those people took our boy away, but the saints preserved him, and us. And God gave him back.

The era of the Holy Family’s first Christmas was violent and dark. From Herod’s persecution of the Holy Innocents came blood and death, and, as the icon of Our Lady of Perpetual Help depicts beautifully, the Blessed Mother and her Son knew that blood and death would come again for Him. Likewise for us: Christ tells us we’ll have to give up what we love most to share in His glory. My wife and I anticipate that, having received a foretaste of it in the hospital.

But when the Magi visited the Holy Family and bestowed their gifts, there was peace in that house. That’s the peace we cherished last year and cherish now. We recall that one vast miracle, God become man, for all mankind. We recall also our many little miracles, for just us.

All this, in our small, quiet home, with our very small, very quiet Christmas.