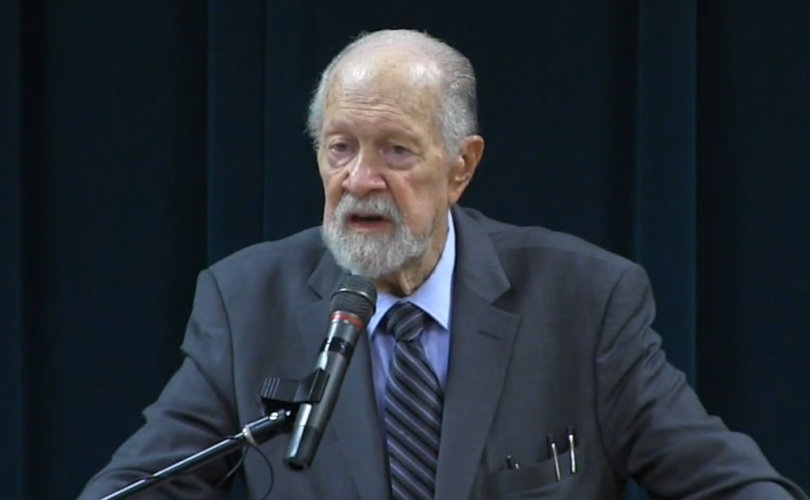 Known as the godfather of the pro-life movement, Scheidler was famous for his street activism. “He learned his direct-action techniques from the 1960s civil rights movement, when he marched with Dr. Martin Luther King, Jr.,” according to Celebrate Life, a publication of the American Life League, the organization which Scheidler founded in 1980.

Scheidler gained national prominence as chief defendant in the landmark NOW v. Scheidler, filed by the National Organizaiton for Women (NOW) which accused him of being a member “in a nationwide conspiracy to obstruct women’s access to abortion clinics through a pattern of racketeering activity including the actual or implied threat of violence.” The case ended up before the U.S. Supreme Court three times.

“My father’s proudest accomplishment was the pro-life work of those he inspired to take an active role in the fight against abortion, the greatest injustice of our time,” said Eric Scheidler, Joe’s oldest son, who serves as the League’s executive director.

“For years, people have been telling me about the talk or protest where they met my father, and how his words and example prompted them to do more than just talk, but to take responsibility for addressing the injustice.”

“I’m grateful that he passed away surrounded by family, in the comfort of his home, his refuge from the rigors of his pro-life mission,” Eric told the Chicago Sun-Times. “His memory will be cherished by the thousands whom he inspired to join him on the front lines of the pro-life movement.”

“Joe Scheidler has been a personal friend and mentor for 30 years,” noted Troy Newman, President of Operation Rescue. “His book ‘Closed!’ inspired me to focus on closing down abortion mills.”

“The 70% reduction of abortion clinics across America is directly attributable to the great Joe Scheidler,” asserted Newman. “I’m proud to stand on his shoulders. May God grant him eternal rest.”

“Joe Scheidler devoted his life to ensuring every child was treated with dignity and respect and joyfully welcomed into this life,” said Rev. Pat Mahoney, Director of the Christian Defense Coalition in Washington, D.C. “His commitment to ‘loving the least of these,’ has been an inspirational witness and example to countless pro-life leaders through the years.”

“In the 35 years I have known Joe, it wasn’t just his dedication to ending abortion violence that impacted so many in our movement. It was also his kindness, humility and servant’s heart. Joe was truly interested in you as a person and was always supportive of your work and organization. He was never competitive, self promoting or focused only on what he was doing,” attested Mahoney. “Joe never put himself forward but shared the spotlight with all. I have to say in my four decades of pro-life work, I have never seen someone more beloved or respected than Joe Scheidler.”

“Heartbroken to hear about the death of pro-life hero and leader for decades, Joe Scheidler,” tweeted Lila Rose, founder and president of LiveAction. “A cheerful, loving force for the most vulnerable, he inspired me and many.”

Heartbroken to hear about the death of pro-life hero and leader for decades, Joe Scheidler. A cheerful, loving force for the most vulnerable, he inspired me and many. Please pray for the repose of his soul and for his loving family. Rest In Peace, Joe.

“Pro-lifers today stand on the shoulders of giants. Joe Scheidler made invaluable contributions to the pro-life movement,” wrote Michael New, conservative Catholic professor and author. “We all owe him an immense debt of gratitude.”

Pro-lifers today stand on the shoulders of giants. Joe Scheidler made invaluable contributions to the pro-life movement. We all owe him an immense debt of gratitude.#ProLife

“I have countless memories of Joe, whether we were together fishing on Lake Michigan, praying to the Lord inside the Supreme Court as they were hearing his case, or saving babies in front of abortion mills. Every conversation with him was an inspiration to double my pro-life efforts,” said Father Frank Pavone, Director of Priests for Life, in a statement.

“Joe’s victory was a victory for the whole pro-life movement,” Father Pavone said of the 2006 Supreme Court case. “And the inspiring example of his life will bring us many more victories in the future.”

“His unduly long, litigious persecution on the part of the National Organization for Women and the nation’s abortion industry — which lasted over nearly three-decades in a landmark court battle, NOW v. Scheidler — was the crucible in which our Thomas More Society was forged,” said Brejcha.

Brejcha added that Scheidler’s “uncompromising commitment to the sanctity of human life has inspired generations and motivated many to move from complacency to militant albeit peaceful protest on behalf of the preborn.”

Joe Scheidler was born on September 7, 1927, in Hartford City, Indiana. After serving in the U.S. Navy as a military policeman at the end of World War II, he earned a bachelor's degree in communications at the University of Notre Dame and a master’s degree at Marquette University.

He spent eight years in religious life, studying for the Catholic priesthood at St. Meinrad Seminary in Indiana, according to biography provided by the Pro-Life Action League. After discerning that God was not calling him to the priesthood, he served as a teacher at Mundelein College, during which time he chaperoned a group of students on a pilgrimage to march with Dr. Martin Luther King, Jr. from Selma to Montgomery in 1965.

“It’s fitting that my father died on the day when Americans remember the legacy of Martin Luther King,” noted Eric Scheidler. “Seeing the impact that regular Americans could have by taking action against racial injustice inspired my father to mobilize Americans in the same way in the fight against the injustice of abortion.”