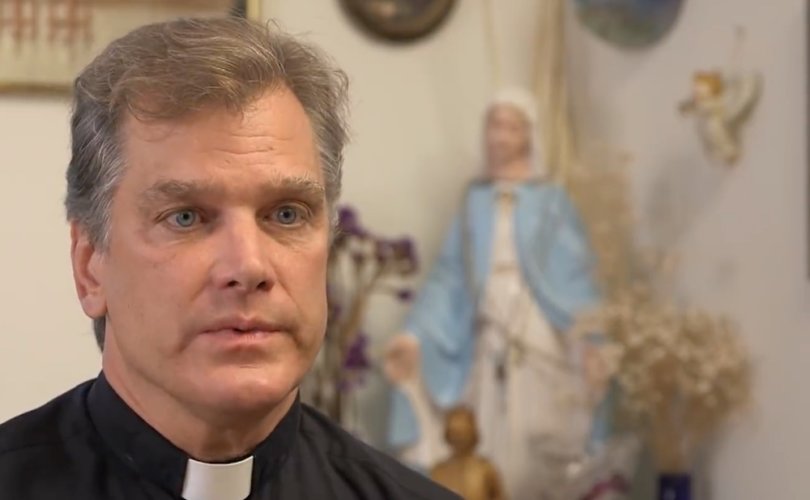 October 9, 2018, (LifeSiteNews) – After GoFundMe deleted a fundraising page meant to aid a priest who is in hiding after he stood up for orthodox teaching on homosexuality, donations quickly more than quadrupled at a new fundraising site.

Church Militant initiated a fundraising effort for Fr. Paul Kalchik, the Chicago priest removed from his parish duties by Cardinal Blase Cupich in apparent retaliation for his decision to burn a homosexualist “rainbow pride flag” previously used by the parish to promote the homosexual agenda.

Kalchik went into hiding, out of fear that Cardinal Cupich would take him away by force, and requires financial aid for his legal defense.

GoFundMe rejected the effort, explaining that its terms were violated.  GoFundMe has a history of shutting down campaigns that LGBT activists label “homophobic.” While Church Militant speculated that LGBT activism may have resulted in GoFundMe yanking the priests' campaign, it has stated that the fundraising platform has provided “no response” as to why the campaign was pulled.

“Unfortunately, @gofundme has deemed our campaign for Fr. Paul Kalchik ‘homophobic’ and a violation of their terms,” read an October 6 tweet issued by Church Militant. “It has refunded back to donors all $16,000 we raised for him.”

“We are starting a new campaign elsewhere. Stay tuned.”

Unfortunately, @gofundme has deemed our campaign for Fr. Paul Kalchik “homophobic” and a violation of their terms. It has refunded back to donors all $16,000 we raised for him.

We are starting a new campaign elsewhere. Stay tuned. pic.twitter.com/UrPrw7CDox

Church Militant re-launched the campaign on a different site, FundingMorality.com,  and in less than three hours recovered the $16,000 in donations previously raised on GoFundMe.com.

“Since GoFundMe shut down the campaign, Church Militant has received multiple comments from outraged Catholics saying they now want to donate twice as much as they did before,” said Church Militant’s Christine Niles in a statement to LifeSiteNews.

“Although Fr. Kalchik is trying to maintain hope in the face of this trial, the fact that his future as a priest hangs in the balance has taken an emotional toll,” continued Niles.  “We ask people to please bear him up in prayer, and if possible, please donate generously to help him in his canonical case against the Chicago archdiocese.”

Chicago priest Father Paul John Kalchik is being persecuted by his bishop Cardinal Blase Cupich and was forced into hiding on September 21st after Cardinal Cupich threatened to have him committed to a psychiatric treatment center. Kalchik’s offense? Burning a banner that had been unused for close to a dozen years that depicted a cross interwoven with a rainbow flag.

The banner used to hang in the sanctuary of his parish, Resurrection Church, in the 1990s and had been recently discovered by staff. Its connection to the parish’s grim past prompted parishioners to suggest that it be burned.

The decision to burn the banner was partly based on the fact that it was bought and installed by a former priest at the parish, an active homosexual who lived an immoral and scandalous life, completely opposed to Judeo-Christian morals and his vow of chastity. The former priest attempted to push that ideology onto members of the church. He died in 1997 at the age of 50, his body found together with a sexual contraption. When they cleaned out his room, they also cleared out two closets full of gay pornography, sex toys and paraphernalia. The Chicago archdiocese covered up the situation, holding a grand, three-day funeral for the priest, ignoring his desecration of the faith.

The banner not only signified an ideology completely opposed to the Catholic faith, it also represented evils perpetrated against Father Kalchik himself. Father Kalchik was twice the victim of homosexual assault, once when he was 11 years old and raped by a neighbor, and a second time when he was 19 and assaulted by a Catholic priest.

After the banner burning, LGBT activists loudly complained to the Chicago archdiocese, demanding that Father Kalchik be punished for what they claimed to be a “homophobic” act. Cardinal Cupich complied with the LGBT lobby’s demands, sending two of his priests to bully Kalchik into leaving his parish. Father Kalchik — who has committed no crime nor broken any laws nor suffers from any psychiatric problems — refused to leave his parish, where he has been pastor for 11 years. Witnesses say that not only did these two priests use crude and threatening language in their confrontation, they also made a veiled death threat if Kalchik did not leave with them to be immediately taken to St. Luke's Institute (a notorious mental health treatment center for clergy). The two priests then told Father Kalchik the police would be sent to take him away. Taking them at their word, Kalchik believed he had no choice but to go into hiding, where he remains now.

A previous GoFundMe site raised $16,000 for Fr. Kalchik, but one week into fundraising, GoFundMe deemed the campaign too “homophobic,” shut it down and refunded all of the money to donors. This means Father Kalchik was not able to receive any of the money raised to help in his defense.

Father Kalchik has secured the services of a canon lawyer to pursue his rights against Cdl. Cupich and the Chicago archdiocese. Donations will go towards his legal defense. Church Militant, the sponsor of this appeal, hopes to raise twice as much as was raised on GoFundMe: (1) to help a good man in need, and (2) to send a clear message to GoFundMe against its denial of campaigns that stand for biblical principles.

Please pray for Father Kalchik. After fighting to rebuild his life after two sexual assaults, he has fought for the last 11 years as pastor to restore the authentic Catholic faith in his parish. He now fears all of his work, and his very priesthood, is in jeopardy.