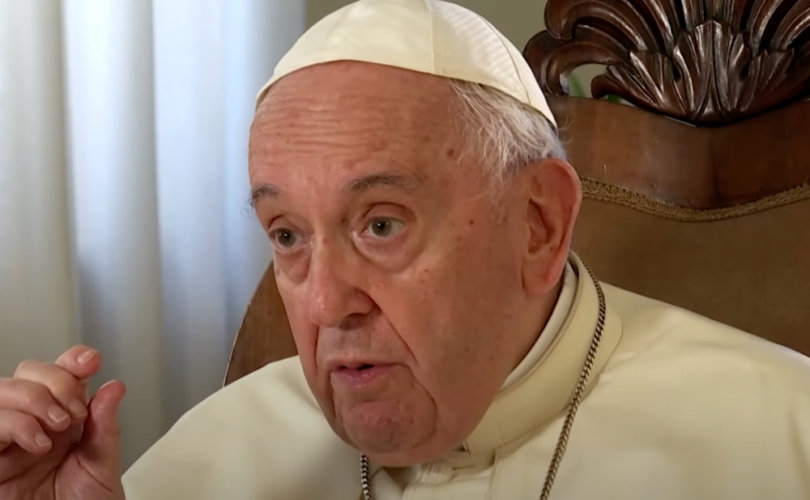 VATICAN CITY (LifeSiteNews) – Pope Francis has praised the controversial Vatican deal with China, saying that it “is going well” and that he hopes it will be renewed in October.

Speaking to Reuters on July 2, Pope Francis doubled down on the secretive deal the Vatican has made with China, which is due for its second renewal in October of this year.

“The agreement is moving well, and I hope that in October it can be renewed,” Pope Francis told the news service. Earlier in the interview, Francis had touched on the recent overturning of Roe v. Wade in the U.S. and stamped on circling rumors about his possible resignation.

His latests comments, released on July 5, dealt with the Sino-Vatican deal which has been the subject of much criticism from China experts as well as Catholic clergy in Asia, notably Cardinal Joseph Zen.

First signed in 2018 and later renewed in 2020, the deal’s specific details remain undisclosed with a peculiar air of mystery surrounding them. China expert Stephen Mosher described the deal as an action which was “perhaps the most controversial of a papacy dogged by controversy.”

When speaking to Reuters, Francis defended the deal as being a necessary part of diplomacy and something which echoed the actions of Popes John XXII and Paul VI in their dealings with Communist nations.

“Diplomacy is like that. When you face a blocked situation, you have to find the possible way, not the ideal way, out of it,” he said.

Reportedly, the Vatican-China deal recognizes the state-approved version of the Catholic Church and allows the Chinese Communist Party (CCP) to appoint bishops. The Pope apparently maintains a veto power although in practice it is the CCP who has control. It also allegedly allows for the removal and replacement of legitimate bishops by CCP-approved bishops.

In an earlier defense of the deal, Francis described it as forming a “new chapter of the Catholic Church in China.” However, the reality on the ground is marked by a heightened increase in religious persecution since the deal was signed, which the U.S. Congressional-Executive Commission on China described as a direct consequence of the deal. In its 2020 report, the Commission wrote that the persecution witnessed was “of an intensity not seen since the Cultural Revolution.”

A growing number of bishops, priests and lay people have been arrested and held in isolation following the deal, with the Vatican’s official media outlet ignoring these instances and instead praising the appointment of bishops which have taken place since the deal was signed.

“It’s a “betrayal of the real Church,” Hong Kong emeritus Cardinal Joseph Zen said of the deal in July 2020 before revealing a startling detail: “It’s not an isolated episode. It’s already a long-standing policy of the Vatican not to offend the Chinese government.”

Yet announcing the deal’s renewal in 2020, Cardinal Secretary of State Pietro Parolin declared that “we are content. There are still many other problems, but we never expected the accord to resolve all the problems.”

Cardinal Zen, recently arrested by the authorities, has been an outspoken critic of the deal since its inception. His arrest is seen as a key moment testing the Vatican’s commitment either to Chinese Catholics or to Beijing. Cardinal Parolin, however, stated that his arrest “should not be read as ‘a disavowal’ of the agreement between the Holy See and the People’s Republic of China on the appointments of bishops.”

A total of six Chinese bishops are now reported to have been consecrated under the terms of the deal, with around 40 bishops still needing to be appointed.

Speaking to Catholic News Agency last year, Father Bernardo Cervellera, the former editor-in-chief of AsiaNews, said that all the bishops so far appointed under the deal had been “president or secretary of the Patriotic Association [the state-approved church]. So this means that they are very near to the government.”

Cervellera added that priests “above all, they have to praise the glory of the Communist Party.” Clerics are also required by law to sign documents promising to support the CCP.

Pope Francis appeared not to take note of such concerns when speaking with Reuters, commenting that “they (the Chinese) also have their own problems because it is not the same situation in every region of the country. It (the treatment of Catholics) also depends on local leaders.”

The Argentine pontiff described the deal’s slow progress as “‘the Chinese way,’ because the Chinese have that sense of time that nobody can rush them.”

Among the notable critics of the deal is the former senior Vatican official in Hong Kong, Monsignor Javier Herrera-Corona. Over a number of months last year, Mgr. Herrera-Corona told missionaries in Hong Kong to prepare for further religious persecution as restrictions were only going to increase.

He was removed as head of the Holy See Study Mission in Hong Kong in February this year, and appointed as Nuncio in the Republic of the Congo and in Gabon. His sudden reassignment, along with that of the senior Vatican official in Taiwan, prompted speculation that Beijing was exercising influence on the Vatican to remove clerics the authorities took issue with.

With the Vatican now looking to renew the deal, it appears that Chinese Catholics will be subject to continued persecution, as AsiaNews wrote – only hours after the deal was signed in 2018 – saying that “[u]nderground Catholics bitterly suspect that the Vatican has abandoned them.”