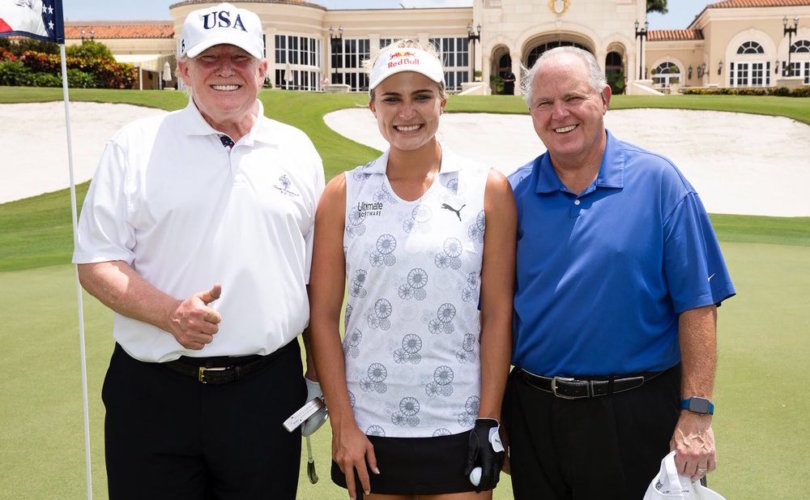 May 2, 2019 (LifeSiteNews) – Ladies Professional Golf Association (LPGA) star Lexi Thompson announced earlier this week she is taking a sabbatical from social media to spare herself “hurtful” comments after a golfing session with President Donald Trump and conservative commentator Rush Limbaugh.

The 24-year-old Thompson golfed with Trump and Limbaugh at Trump International Golf Club in West Palm Beach, Florida last month. Thompson has golfed with Trump since before he entered politics, and told Golf Digest in 2017 that politics doesn’t factor into their friendship. “I’m not into politics, so honestly I can’t even ask him anything,” she said.

Lexi Thompson is the epitome of white privilege.  She does not have to be “into” politics because she knows none of Trumps policies will hurt her.   You are the company you keep, lie down with dogs get up with fleas Lexi.

The idea of @Lexi doing photo op with @realDonaldTrump at his property is tough to digest. However, she’s white, entitled, and a golfer. All of which interest trump. I will no longer follow her!

Over the weekend, Thompson posted an announcement on Instagram that she would be “taking a break from social media,” because “to read some of the hurtful things being said to me lately isn’t fair and I’m not dealing with it. Thank you to my true fans out there I will be back on but I’m going to be focusing on me right now and my life.”

Blue Giraffe Sports, the agency representing Thompson, followed up with a statement saying her decision was “not based on a recent event or post, but rather from a culmination of harsh, hurtful, and unwarranted commentary from social media abusers over time.”

“Lexi is aware that this is a constant problem for most people in the public spotlight, and she has always readily accepted that fact,” the agency said. “Lexi is excited to compete in the LPGA Mediheal Championship this week in San Francisco and simply wanted to remove this negative variable on a temporary basis in order to focus on competing against the world's best.”

“Any news report that a recent event or situation led to her decision is completely false and erroneous,” the follow-up claimed, seemingly downplaying Thompson’s reference to “hurtful things being said to me lately.”

Thompson isn’t the only golfing star to come under fire for a friendship with the 45th president.

“We've played golf together. We've had dinner together. I've known him pre-presidency and obviously during his presidency,” Tiger Woods said last month. “He's the President of the United States. You have to respect the office. No matter who is in the office, you may like, dislike personality or the politics, but we all must respect the office.”