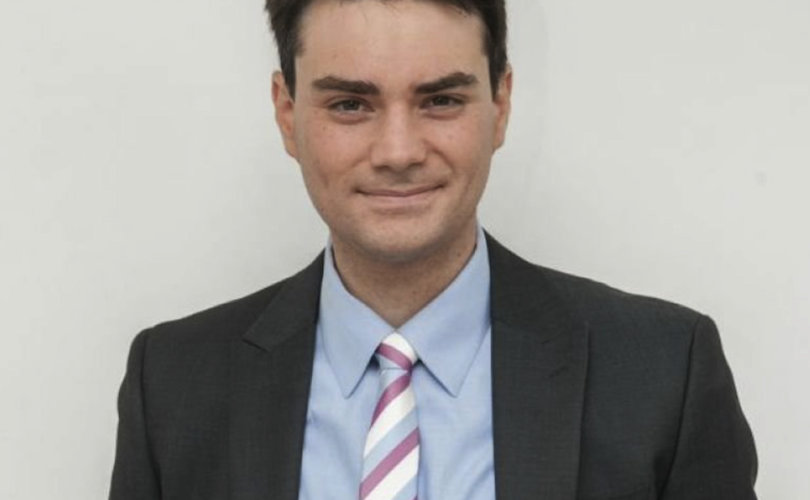 Update Dec. 5, 2018: This story has been updated to denote Father James Martin, S.J. having given a commencement address for Gonzaga University in 2016.

SPOKANE, Washington, November 30, 2018 (LifeSiteNews) – Gonzaga University has blocked a proposed speaking engagement for Ben Shapiro, saying it would be “contrary” to the school’s “Catholic/Jesuit mission and values.”

Gonzaga Vice President of Student Development Judi Biggs Garbuio declined the College Republicans chapter’s request to book Shapiro to speak at the university, Campus Reform reports, citing in addition to the school’s “Catholic/Jesuit mission,” human dignity, solidarity with vulnerable people, and safety concerns, given the sort of protests that might accompany an appearance by the conservative, pro-life Jewish commentator.

“Mr. Shapiro’s appearances routinely draw protests that include extremely divisive and hateful speech and behavior, which is offensive to many people, regardless of their age, politics or beliefs,” Biggs Garbuio said, appearing to accidentally acknowledge the intolerance of campus left-wing protestors, who have at other schools rioted and stormed buildings in response to speakers with whom they disagreed.

“Gonzaga University is committed to the human dignity of every individual,” she said. “This is the core of our mission based on the teachings of Christ Jesus, and the foundations of the Society of Jesus. We stand in solidarity with vulnerable members of our community who may be targeted for discrimination, ridicule, or harassment by others.”

Biggs Garbuio went on to say that because of “what has occurred on other campuses” there is question of whether safety could be guaranteed.

“They want Gonzaga to be a left of center university and they have made it clear diversity of thought it not welcome,” Johnston told Campus Reform. “My mission as president is to ensure free speech on campus, as college is a place to expand your thinking and not be indoctrinated in the classroom.”

“I refuse to accept a University that only supports strictly liberal thinking,” she added. “The hypocrisy must end.”

Although Biggs Garbuio cited Gonzaga’s mission in her reasoning for denying the request to host Shapiro, the university’s mission statement does express a commitment to support for critical thinking.

The mission statement says in part, “Through engagement with knowledge, wisdom, and questions informed by classical and contemporary perspectives, Gonzaga cultivates in its students the capacities and dispositions for reflective and critical thought, lifelong learning, spiritual growth, ethical discernment, creativity, and innovation.”

A Washington Times report noted how Shapiro reacted without fanfare to the rebuff.

“When an idea or figure arises who does not support the politically biased narrative Gonzaga clings to, our university can dismiss it as hate and intolerance,” Meyer told Campus Reform. “I urge Gonzaga to reconsider this decision and support the fundamentals of the Jesuit university to which I belong.”

Nicholas Gervasini, a Gonzaga senior and past president of the College Republicans, termed Shapiro a “nightmare for the administration.”

Gervasini said that the conservative speaker and Daily Wire Editor-in-Chief has “made his living criticizing their exact types.”

Young America’s Foundation (YAF) reported on the move by Gonzaga Wednesday, with another take on the blocking of Shapiro beyond that of a ban of free speech and critical thought.

He referenced specifics of her background, including among other things Davis having been a proud member of the Communist Party, Davis having been welcomed to Cuba in 1969 by the country’s dictator Fidel Castro and praising the socialism there, and her making the FBI’s Ten Most Wanted fugitives in 1970 for her role purchasing firearms used to shoot a judge.

“This decision by Gonzaga administrators amounts to institutional anti-Semitism,” Brown said. “For Gonzaga to allow someone like Angela Davis to speak—while barring Ben Shapiro from appearing at the invitation of conservative students—is the height of liberal hypocrisy.”

“No one is expecting Shapiro to be teaching on the tenets of the Catholic faith,” added Brown, “so Gonzaga’s objections are flatly absurd, especially when one considers Angela Davis somehow passed muster for Gonzaga administrators.”

In the past Gonzaga has hosted supporters of abortion and same-sex “marriage” as commencement speakers, shown support for a pro-same-sex “marriage” group, been open to instituting policies recognizing gender-fluidity, welcomed the vulgar Vagina Monologues play, and been unsupportive of the pro-life cause on campus.

It was at a 2016 commencement address for Gonzaga where Jesuit Father James Martin inferred in conflict with Catholic Church teaching that God made gay, lesbian and transgender individuals as they are.

The Church teaches that human beings are not defined by their sexual inclinations.

Shapiro is scheduled to speak at the 2019 March for Life, which draws hundreds of thousands of Catholics every year.