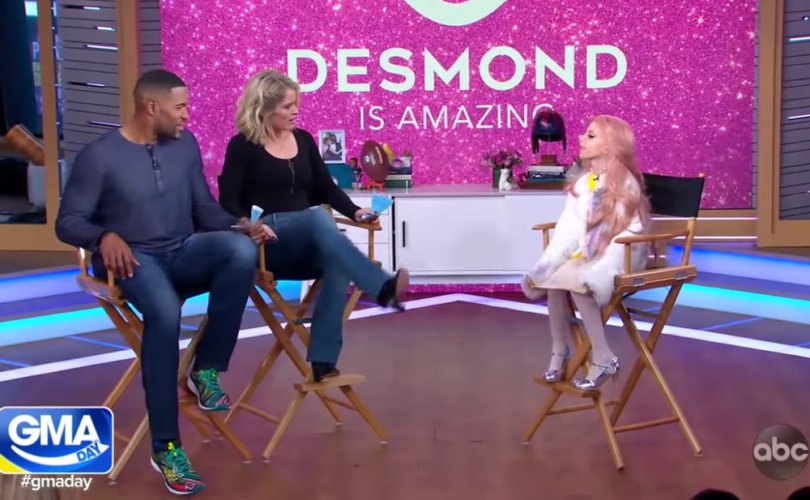 November 16, 2018 (LifeSiteNews) – The sexualization and “gender fluidity” of children got one of its most mainstream boosts yet this month, as “Good Morning America” (GMA) devoted a segment to prepubescent “drag artist” Desmond Napoles.

Napoles, known onstage as “Desmond is Amazing,” is a self-described “androgynous drag kid” who identifies as gay (though it’s unclear if he understands the term’s implications). He reportedly started displaying an interest in women’s clothes at age six, after which his parents say a therapist advised them to allow him to “explore.” He rose to prominence in 2014 when RuPaul and Jinkx Monsoon featured him in a music video.

Earlier this month, “GMA Day” co-hosts Michael Strahan and Sara Haines invited Napoles on the show for a celebration of his “trail-blazing” and “bravery” in the world of drag.

After Napoles came onstage by strutting across a red carpet, a conversation ensued celebrating the “inspiring” impact of his cross-dressing as an example for individuality, and his parents' support for his self-expression. The young boy's flamboyant and decidedly-adult garb contrasted sharply with his talk of enjoying trains and root beer.

The segment also treated Napoles to a surprise visit by “iconic drag queens” Hedda Lettuce, Shannel, and Alyssa Edwards. The performers lavished similar praise on the boy’s activities as “courageous,” “inspirational,” and “the future of drag.” They also presented him with a number of gifts, including a gift basket of makeup, a unicorn bag with fake nails and other assorted items, and more.

“It’s a tough world out there, and not everyone’s accepting of things, and some people have criticized you,” Haines said at one point. “What do you say to them?” After a pause, Napoles said simply, “it’s fine.”

Pro-family advocates don’t attack Desmond himself; they argue his parents and media supporters aren’t acting in his or other children’s best interests.

“Drag queens are, and always have been, typical features of adult entertainment venues, and the culture surrounding drag performing is shrouded with overt sexuality,” she wrote.

“All cross-dressing aside, drag culture is nothing children should be integrated into, but clearly, those in the entertainment industry think it’s 'cute' to see a little boy take on the gender-bending characteristics of men who typically appear on the stages of strip clubs and bars.”

“This is absolutely not OK,” she added.

Even homosexual writer Chad Felix Greene has chided homosexuals as being blind to the fact that they are sexualizing children by dressing them in drag, something which he called “abuse.”

“The boy is emulating an adult woman being sexually provocative,” wrote Greene of such cases that include Desmond as well as 9-year-old Nemis Quinn Mélançon Golden, a.k.a. Lactatia.

He calls what homosexual activists are doing to Desmond “exploitation” that “steal(s) the child’s innocence and impose(s) an adult identity onto him, all to validate their own insecurities.”

“The LGBT world will never be able to fully appreciate the damage being done to a generation of children pushed to grow up faster,” he warns. “Early sexual activity and expression can be devastating to young people, especially LGBT youth. High rates of drug abuse, sexual abuse, and risky sexual behavior are common. HIV rates are extremely high for gay and bisexual young men aged 13 to 24. Nearly 40 percent of homeless youth identify as LGBT, with higher risks of drug use and sex work.”

A variety of scientific literature indicates that promoting gender fluidity within children’s minds is unnecessary and destructive. Studies indicate that between 80-90% of children experiencing gender dysphoria outgrow it on their own by late adolescence, and that even full gender “reassignment” surgery often fails to resolve gender-confused individuals’ heightened tendency to engage in self-harm and suicide.

In September, Brown University behavioral scientist Lisa Littman published a study finding that 87% of the teens reviewed (via questionnaires to 256 parents) belonged to a friend group characterized by some degree of “social influence” on gender, such as other gender-confused teens; and that 63% of the teens had been diagnosed with at least one mental health disorder or neurodevelopmental disability before deciding they were a different gender.

Nevertheless, “Good Morning America” dubbed Desmond’s immersion in the world of drag as an unqualified good. “Thank you for reminding us all to be who we are on the inside,” Haines said at the segment’s conclusion.