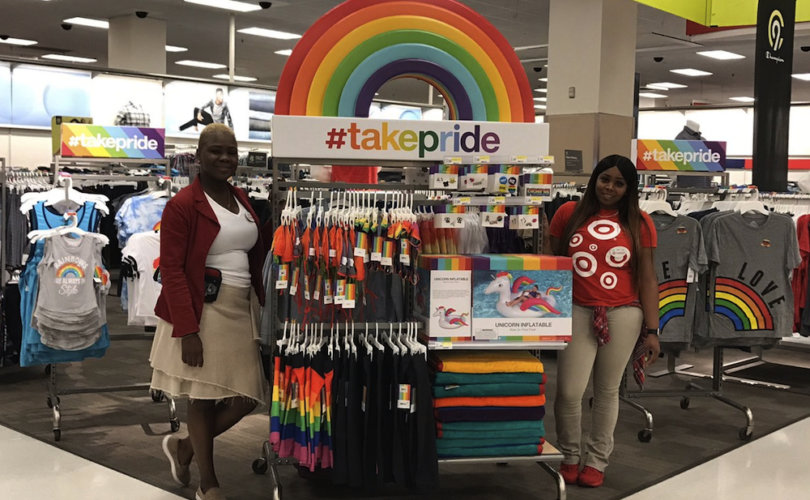 September 27, 2017 (LifeSiteNews) — A hundred major corporations, ranging from Target to American Airlines to Best Buy, have signed on to an LGBTQ activist coalition supporting the “Equality Act,” which would federalize homosexuality and transgenderism as “civil rights” categories in the law.

The homosexual-bisexual-transgender lobby group Human Rights Campaign says the bill, HR 2282, is about “letting Americans live their lives without fear of discrimination,” but pro-family organizations counter that the “Inequality Act” (as Family Research Council calls it) would expressly undermine people’s religious freedom to act against homosexuality and extreme gender confusion (transgenderism), e.g., by declining to participate in same-sex “marriages.”

The sweeping legislation, introduced by openly homosexual U.S. Rep. David Cicilline, D-Rhode Island, has 194 Democratic co-sponsors and two Republican co-sponsors. With little action on the bill likely in a GOP-dominated Congress, HRC is taking its campaign for HR 2282 to the corporate world, where its institutional influence and power greatly exceeds that of social conservatives.

HR 2282, as described by the Congressional Research Service (CRS), “amends the Civil Rights Act of 1964 to include sex, sexual orientation, and gender identity among the prohibited categories of discrimination or segregation in places of public accommodation.”

The bill prohibits employers with 15 or more employees from “discriminating based on sexual orientation or gender identity, subject to the same exceptions and conditions that currently apply to unlawful employment practices based on race, color, religion, sex, or national origin,” according to CRS.

The bill’s far-reaching impact would greatly expand the potential for lawsuits against private individuals who choose not to affirm behaviors they regard as immoral before God. Already, using state and local “sexual orientation” and “gender identity” laws, LGBTQ activists and their allies have made life difficult for people opposing “gay marriage” and “proud” homosexuality and transsexualism — from wedding cake makers and wedding photographers to t-shirt makers and even bar owners.

“The bill expands the categories of public accommodations to include places or establishments that provide:

— goods, services, or programs, including a store, a shopping center, an online retailer or service provider, a salon, a bank, a gas station, a food bank, a service or care center, a shelter, a travel agency, a funeral parlor, or a health care, accounting, or legal service; or

According to the CRS, HR 2282 defines “gender identity” as “gender-related identity, appearance, mannerisms, or characteristics, regardless of the individual's designated sex at birth.” The bill states that the Department of Justice (DOJ) “may bring a civil action if it receives a complaint from an individual” who claims to be “denied equal utilization of a public facility … (other than public schools or colleges) on account of sex, sexual orientation, or gender identity.”

Thus, under HR 2282, a “male-to-female” “transgender” activist could sue an amusement park if it refused to let him, as a biological male, enter the public women's restrooms (since amusement parks would be covered under the Act as “public accommodations”).

HRC quotes Dow Chemical employee Cory Valente in defense of the “Equality Act”: “No one should be fired, evicted from their home, or denied services because of who they are. Supporting inclusion and equality is the right thing to do – for business and for society.”

But FRC states that by expressly stripping away the protections of federal “Religious Freedom Restoration Act”–designed to protect citizens’ conscience rights–the pro-LGBTQ “Inequality Act” “would force people to affirm homosexuality, same-sex marriage, and transgenderism, despite their religious objections in various situations, including the provision of public accommodations.”

“This is the antithesis of religious freedom,” the pro-family group asserts.

HRC has employed to great effect its skewed “Corporate Equality Index” “scorecard” system to pressure corporations to ratchet up their pro-homosexual and pro-“transgender” policies. Under the ratings system, companies get points for giving money to pro-LGBTQ activities but they potentially lose 25 points if they do anything that HRC considers to be a “large-scale official or public anti-LGBT blemish” (see page 8 here).

Thus, even neutral corporate giving policies — say, if a company’s executives wanted to avoid taking sides by financially supporting both pro-LGBT groups and organizations like the American Family Association — would be boxed out for any corporation seeking a perfect HRC “Equality Index” score.

And under the HRC’s self-serving “Index,” companies must comply with an ever-expanding list of pro-LGBTQ demands to continue receiving a “100 percent” ranking.

HRC reports the following 100 major corporations as members of its “Coalition for the Equality Act”: