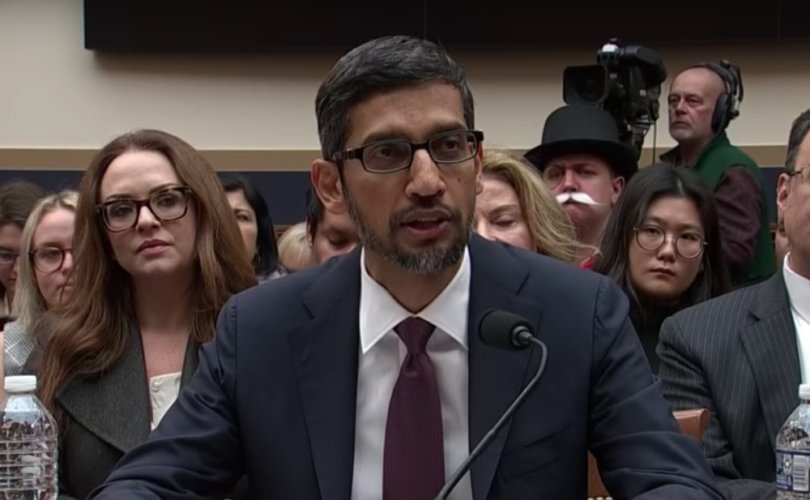 WASHINGTON, D.C., December 12, 2018 (LifeSiteNews) – Sundar Pichai, CEO of internet powerhouse Google, appeared on Capitol Hill Tuesday to testify before the House Judiciary Committee, where Republican lawmakers posed numerous questions to him about allegations of political bias at the search-engine giant.

“There is talk of suppressing conservative speech, why wouldn’t that be something you would launch an internal investigation in, publish those reports, sanction those employees that may or may not engaged in proper conduct so we can all be involved in the experience?” Gaetz asked. Pichai claimed Google has looked into several allegations, but has not specifically launched an investigation into employee bias because the company’s processes are layered with enough redundancies and review to catch potential harm before it takes effect.

Gaetz then asked about internal employee discussion groups such as the recently-revealed “resist” group in which employees discussed expelling Breitbart from Google AdSense on “hate” grounds. “I promise you that Breitbart is very much on our radar,” AdSense legal team member Emily Garber said.

Pichai said he was “not aware” of the “resist” group and that candid, private expressions by individual employees don’t reflect the company’s view, but claimed he would be “happy to follow up” now that he’s been informed of it.

“How can I have confidence that you’re protecting the sanctity of your system when you don’t even know your employees are getting together on your own company’s infrastructure to talk about political activity?” the congressman asked.

Jordan used his time to seek answers about leaked emails that revealed in September that Google had engaged in efforts to increase Latino voter turnout in 2016, which Multicultural Marketing department chief Eliana Murillo admitted were essentially a “silent donation” in hopes the voters would back Democrat Hillary Clinton.

Pichai claimed to have “found no efforts to substantiate those claims,” and repeatedly insisted that Google “didn’t have any effort to push out votes for any particular demographic.” Jordan repeatedly pressed him on whether “your own head of multicultural marketing” was “lying when she said you were trying to get out the Latino vote in key states […] just made it up out of thin air the day after the election.” Pichai refused to give a clear answer.

“Conduct of the sort described by Ms. Murillo would be an unreported, illegal contribution by Google to the Hillary Clinton presidential campaign,” PowerLine’s John Hinderaker commented Tuesday. “If we are going to start prosecuting campaign finance violations against someone other than Dinesh D’Souza, let’s go all the way.”

King and Smith both asked Pichai about suspicions that Google manipulates its search algorithms to disadvantage conservative content.

Citing a PJ Media analysis that found 96% of the first 100 results for the term “trump” came from left-leaning news outlets along with research psychologist Dr. Robert Epstein’s assessment that Google likely swung as many as 2.6 million votes to Clinton in 2016, Smith said Google’s stated mission to provide unbiased information was “clearly” not working and asked what he would do to “improve the situation.”

Pichai disputed Epstein’s methodology, and suggested sanctioning offending employees was unnecessary because “it is not possible for an individual employee or groups of employees to manipulate our search results. We have a robust framework, including many steps in the process.”

Perhaps most significantly, Pichai claimed that the Southern Poverty Law Center (SPLC), a notorious left-wing organization Google considers a “Trusted Flagger” of potentially hateful content on the Google-owned YouTube, has “never flagged a single video on our platform.”

SPLC’s stated mission is to “completely destroy” groups it targets for “strictly ideological”reasons, and has fought to get numerous mainstream conservative organizations barred from apolitical online services. This summer, it agreed to pay $3.4 million in a defamation suit brought by the British-based Quilliam Foundation. YouTube has attempted to restrict multiple conservative groups, such as Dennis Prager’s Prager University, under false pretenses.

Pichai also inadvertently undermined one of tech giants’ main justifications for the content management changes made since 2016, the Daily Caller reports. Google, Facebook, and Twitter have all spoken of the importance of preventing foreign government from interfering in future elections, but Pichai admitted that accounts linked to the Russian government only spent “about $4,700” on advertising during the presidential election.

Similar ads on Facebook amounted to approximately $100,000 and more than $274,000 on Twitter. Taken together, these Russian-backed efforts to sow division among the electorate amount to less than $400,000 – or less than 0.004% of the $9.8 billion estimated to have been spent on political advertising in 2016.

Republicans weren’t the only ones to grill Pichai, however. PJ Media reports that Democrat Rep. Jerrold Nadler of New York implored Google to “combat the spread of white supremacy and right-wing extremism across YouTube,” and Steve Cohen of Tennessee suggested the real problem was “overly using conservative news organizations on your news,” based on his experience being a frequent MSNBC guest yet having a Daily Caller piece on him being the first result in a Google search.

Google has also come under fire for leaked private communications in which top executives vowed to ensure 2016 was no more than a “blip” or “hiccup” in a “moral arc of history bend[ing] towards progress.” Google has also come under fire for research it commissioned to explore how it could be a “good censor” to strike a balance between an “unmediated ‘marketplace of ideas,’” and “well-ordered spaces for safety and civility.”