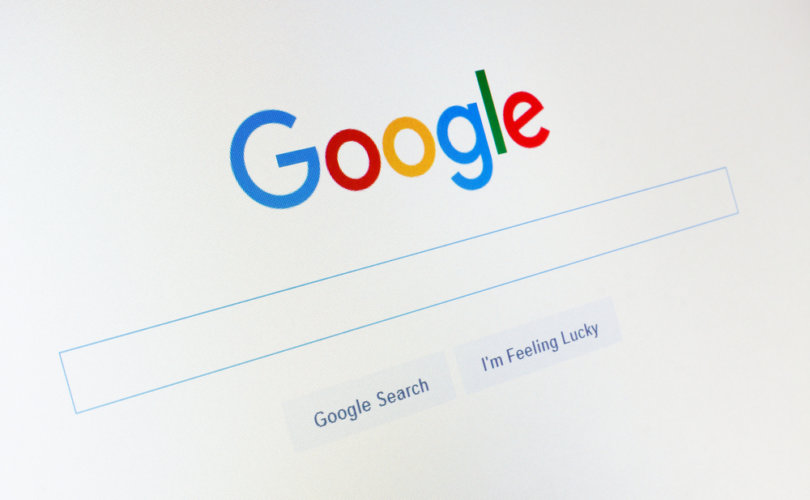 July 22, 2020 (LifeSiteNews) – Conservative websites, including The Daily Caller and Breitbart, did not show up during Google searches for some time yesterday, stoking fears that the tech giant was essentially censoring conservative free speech.

Google later stated that it had “investigated & have since fixed the bug.”

Just noticed Google has removed several conservative websites from search results (at least on my end, in the UK). RedState, Breitbart, Daily Caller, Human Events, and more – all like this for pages of results pic.twitter.com/v2PHFgZ3zY

Nash also noted that some websites “providing a left-wing perspective are also affected. MintPress News has a small link in the Wiki info bubble, but no links to the website (or any of its articles) in 8 pages of search results.”

Websites providing a left-wing perspective are also affected. MintPress News has a small link in the Wiki info bubble, but no links to the website (or any of its articles) in 8 pages of search results pic.twitter.com/KtMHbYwCbo

The blog of conservative commentator Rod Dreher, author of “The Benedict Option,” was also suppressed in Google search results. In an update to his original article, Dreher acknowledged that Google had fixed the issue. At the same time, he said “this shows you how easy it is to effectively unperson an entire category of news and commentary sources.”

In its brief statement on Twitter, Google acknowledged the “issue” of websites not being displayed in the search results. The company stressed that “sites representing a range of content and different viewpoints” were affected. The tech giant said its “ranking systems don’t index, rank or classify content based on political lean.”

Today we became aware of an issue that impacted some navigational and site: operator searches. We investigated & have since fixed the bug. Contrary to some speculation, this did not target particular sites or political ideologies….

Today’s issue affected sites representing a range of content and different viewpoints. Our ranking systems don’t index, rank or classify content based on political lean, as we’ve explained in our How Search Works site: https://t.co/XBPf3WFUKS pic.twitter.com/Rb1AHXXT00

Nevertheless, Mediaite speculated, based on comments by former Google engineer Mike Wacker, that the issue with search results “may have inadvertently exposed an internal list aimed at suppressing certain news outlets.”

“It appears to have revealed the existence of another blacklist that disproportionately targets conservatives,” Wacker said. “The glitch is that sites on this blacklist disappeared from Google search results, but the existence of the list is very much by design. And that raises a major question: Why was this blacklist created in the first place, and what else is it used for?”

Mediaite also quoted researcher Dr. Robert Epstein as saying, “It’s likely that a person or algorithm at Google added ‘breitbart.com’ and other URLs to one or more of the company’s blacklists,” Epstein said. “Then, perhaps after some pushback, someone pulled those URLs off the blacklists.”

In fact, The Daily Caller had reported on internal Google documents proving the tech giant does potentially manipulate search results to filter out certain kinds of content. “The deceptive_news domain blacklist is going to be used by many search features to filter problematic sites that violate the good neighbor and misrepresentation policies,” one document stated.

“The purpose of the blacklist will be to bar the sites from surfacing in any Search feature or news product. It will not cause a demotion in the organic search results or de-index them altogether,” the document continued.

According to the Daily Caller, “targeted sites will not be removed from the ‘ten blue links’ portion of search results, but the blacklist applies to most of the other search features, like ‘top news,’ ‘videos’ or the various sidebars that are returned as search results.

In yesterday’s case, however, some websites did not even appear in the traditional section displaying the “ten blue links.”

A number of large tech companies have been called out by free speech advocates for their attempts to censor, or at least influence, content hosted on their services, for instance Twitter or Facebook.

In May, President Donald Trump even signed an executive order suggesting the federal government would begin to interpret much more narrowly the legal immunities social media companies currently enjoy.

With services like Twitter, Facebook, and YouTube attaching fact-checking labels or boxes to some user-generated content, they should be treated not as platforms, but as publishers, Trump argued. Accordingly, the immunity of tech giants “should not extend beyond its text and purpose to provide protection for those who purport to provide users a forum for free and open speech, but in reality use their power over a vital means of communication to engage in deceptive or pretextual actions stifling free and open debate by censoring certain viewpoints.”

Twitter announced earlier in May that it was starting to attach warning labels to “some tweets containing disputed or misleading information” in the context of the coronavirus pandemic.

“In serving the public conversation, our goal is to make it easy to find credible information on Twitter and to limit the spread of potentially harmful and misleading content,” Twitter said in a statement. The company introduced “new labels and warning messages that will provide additional context and information.”

Twitter also indicated that in the future, “we may use these labels and warning messages to provide additional explanations or clarifications in situations where the risks of harm associated with a tweet are less severe but where people may still be confused or misled by the content.”