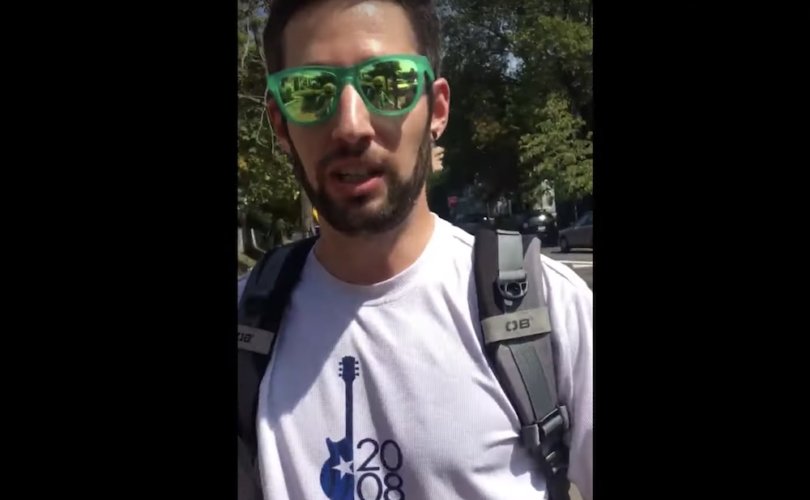 During the afternoon on Saturday, August 31, Gribbin was chalking pro-life messages on the sidewalk by the Washington, D.C. Planned Parenthood. Chasan stole Gribbin’s chalk and physically assaulted Gribbin. Gribbin was able to capture this on video.

Gribbin filed a report with the Washington Metropolitan Police. However, since they did not press charges against Chasan, Gribbin decided to file a civil lawsuit against Chasan last year.

“This is absurd. Michael Gribbin is a victim, not an assailant. There is no way his actions after before, during, or after the assault caused Chasan $5 million in damages,” commented Dr. Michael New, a Catholic University of America professor who coordinates weekly prayer vigils outside the D.C. Planned Parenthood. “Furthermore, any negative consequences incurred by Chasan are the direct result of his own misconduct. It is my hope that the judge dismisses Chasan’s countersuit as frivolous.”

According to legal documents, Chasan alleges that media coverage about the encounter has caused him “loss of his reputation, shame, mortification, and injury to his feelings, both personal and professional.”

“Once again, I want to reiterate the fact I hope Michael Gribbin's civil lawsuit is successful,” New continued. “Pro-life activists are not targets. No one should have to fear physical violence for espousing pro-life views in public. A ruling in Gribbin's favor will make it clear that individuals who harm peaceful pro-life activists will be punished.”

Gribbin is being represented in court by attorney John Garza. A pretrial hearing occurred on February 21 and a deposition is scheduled for later this month.