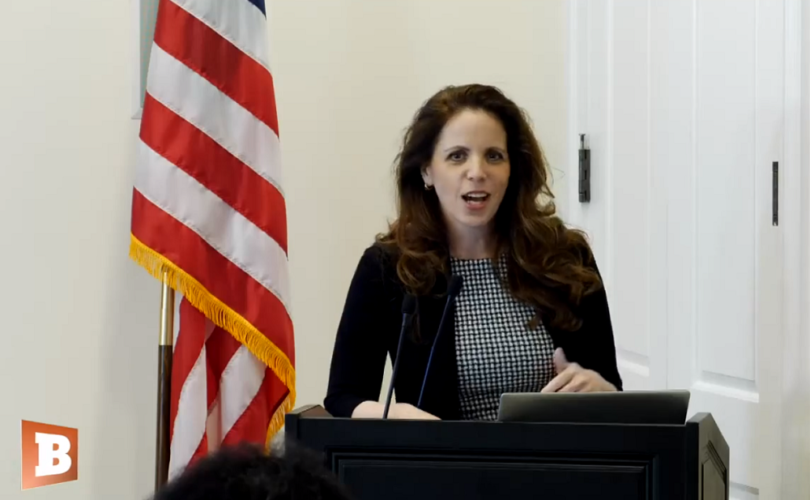 July 28, 2020 (LifeSiteNews) — A video viewed millions of times, which showed doctors championing hydroxychloroquine as an effective treatment for the coronavirus and blasting the “spider web of fear” the virus has caused Americans, was swiftly removed from YouTube, Twitter, and Facebook for violating the sites’ respective COVID-19 “misinformation” policies.

The banned video, originally posted by Breitbart News, was removed despite going viral. It shows a press conference held this Monday in front of the U.S. Supreme Court by the group America’s Frontline Doctors in Washington, D.C.

The group is in D.C. for its “White Coat Summit” event, which was organized and sponsored by the Tea Party Patriots and Rep. Ralph Norman (R-S.C.). It kicked off yesterday with a full-day agenda and finished up today.

The doctors’ group website (which as of press time appears to be taken offline, but parts of it can still be viewed on the internet archive site Wayback), claims that “American life has fallen casualty to a massive disinformation campaign. We can speculate on how this has happened, and why it has continued, but the purpose of the inaugural White Coat Summit is to empower Americans to stop living in fear.”

“If Americans continue to let so-called experts and media personalities make their decisions, the great American experiment of a Constitutional Republic with Representative Democracy, will cease.”

The report goes on to mention that Stone did not tell Breitbart which part of the video Facebook argued was “false information” or where the decision to remove the videos came from.

“The #2 most-engaged post on Facebook today is a Breitbart video of a group of doctors claiming that hydroxychloroquine is ‘a cure for Covid’ and ‘you don't need a mask.’ 14 million views in 6 hours. (For scale, Plandemic got ~8 million in a few days.),” wrote Roose on Twitter on Monday.

This garnered a response from the same Facebook official who replied to Breitbart, Andy Stone, who replied in the Twitter thread, saying, “Yes, we removed it for sharing false information about cures and treatments for COVID-19.”

On Facebook, the Breitbart News live stream of the doctors’ press conference had over 17 million views “within 8 hours and had 185,000 concurrent viewers at the time it was streamed,” according to the news site.

A YouTube clip of the event had 80,000 views before it was removed for “violating YouTube’s Community Guidelines,” according to Breitbart News.

Breitbart News’s live stream of the event had around 1 million views on Twitter’s live-streaming platform Periscope before it was taken offline, according to the news site.

America’s Frontline Doctors was founded by Dr. Simone Gold, who according to her website is a “board-certified emergency physician Stanford educated attorney.”

The full line-up of speakers for the “White Coat Summit” included Dr. Gold and Dr. Dan Erickson, who made headlines in April for questioning the coronavirus lockdown measures and its impact on the economy and people’s mental health.

The doctors’ Monday press conference began with Gold, who said they had decided to hold the summit because “the American people have not heard from all the expertise that’s out there all across our country. We do have some experts speaking, but there’s lots and lots of experts across the country.”

Gold said that there “are many thousands of physicians who have been silenced for telling the American people the good news about the situation, that we can manage the virus carefully and intelligently, but we cannot live with this spider web of fear that’s constricting our country.”

A part of Monday’s “White Coat Summit” can be viewed at a link from Breitbart’s website. Today, Breitbart News reported that Twitter had limited its account over the sharing of the doctors’ video.

“Shortly after removing the footage of the livestream, Twitter limited the Breitbart News official account, which means the account cannot be used to send tweets. A Twitter spokesperson told Breitbart News: ‘Tweets with the video are in violation of our COVID-19 misinformation policy,’” reads the Breitbart News report about the censorship.

The U.S. Food and Drug Administration (FDA)–approved drug hydroxychloroquine (HCQ), which is used mainly to treat malaria, has been the source of much debate and speculation when it comes to treating the coronavirus. It was heavily talked about during the press conference.

“When have you ever heard of a medication generating this degree of controversy? A 65-year-old medication that has been on the World Health Organization’s safe, essential list of medications for years. It’s over the counter in many countries. And what we’re seeing is a lot of misinformation.”

According to the America’s Frontline Doctors website as seen on Wayback, Dr. Torado “wrote the first widely read paper on chloroquine in treatment of COVID-19 in An Effective Treatment for Coronavirus (COVID-19),” and his “discovery of the fraudulent data investigation led to what is now referred to as #LancetGate — the stunning once-in-a-generation retraction of the now infamous The Lancet study that had led to the European Union and the WHO halting studies of HCQ.”

In March, the U.S. FDA approved the drug to be used for experimental coronavirus treatments.

Early on in the coronavirus crisis, some studies showed that HCQ could be an effective treatment against COVID-19. However, a study published by the medical journal The Lancet said researchers had found “no benefit” to using the drug, adding that it “decreased in-hospital survival and an increased frequency of ventricular arrhythmias.”

This study prompted many world governments to decide to ban or restrict HCQ for treating COVID-19 patients.

The Lancet was forced to retract its study, however, after revelations from the newspaper The Guardian raised significant doubts about the credibility of the source material.

During Monday’s doctors’ press conference, Dr. Stella Immanuel, who says she is a primary care physician in Houston, Texas, claimed that hydroxychloroquine helped her treat her COVID-19 patients.

The Daily Beast reported that Immanuel was born in Cameroon and is a registered physician in Texas and works in a medical clinic “out of a strip mall next to her church, Firepower Ministries.” Her Firepower Ministries website was offline as of press time.

Despite Immanuel’s claims of the effectiveness of HCQ combined with zinc and Zithromax, some have called her credibility into question, with one report from the Daily Beast saying Immanuel “has a history of making bizarre claims about medical topics and other issues. She has often claimed that gynecological problems like cysts and endometriosis are in fact caused by people having sex in their dreams with demons and witches.”

U.S. president Donald Trump shared clips of the doctors’ group video with his followers, but the links were later removed by Twitter from his account.

Donald Trump, Jr. also shared clips of the doctors’ group video on Twitter. Today, he had his account suspended for 12 hours.

His profile, @DonaldJTrumpJr, is still visible.

Media Research Center president and founder Brent Bozell took to Twitter today to share his dismay at the news of Trump Jr.’s account being temporarily locked.

“The Big Tech Gestapo are at it again! Facebook, Google, and YouTube went insane yesterday and again shut down free speech, removing a viral @BreitbartNews video of a @TPPatriots event. Big Tech can’t be allowed to choose whose voice is heard,” said Bozell on Twitter.