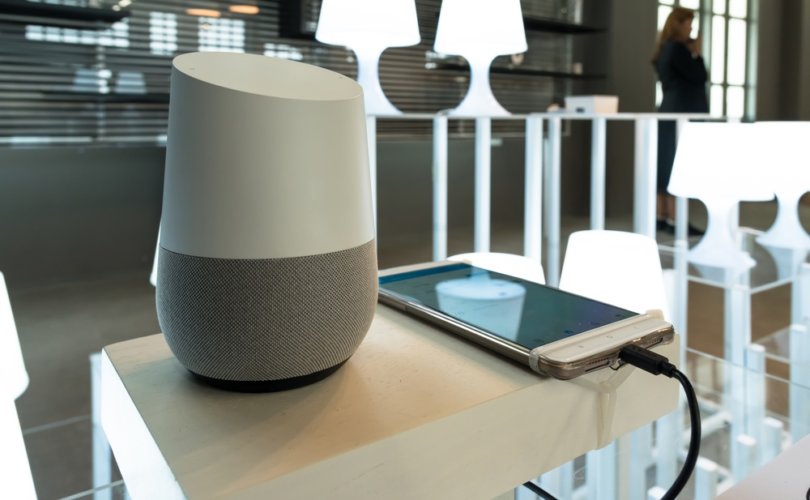 BRENTWOOD, Tennessee, January 31, 2018 (LifeSiteNews) – While 'smart' technology gives the impression that it knows just about everything, it appears that Google Home cannot answer the question, “who is Jesus?”

Author and television producer David Sams conducted an experiment and streamed it live on Facebook. He noted answers from the most popular “smart” machines when asked, “Who is Jesus Christ?”

When he asked Google Home “Who is Jesus Christ?” the reply he received was, “I’m not sure how to help you with that.”

When asked about Jesus, or about Jesus Christ, or about God, Google Home answered, “My apologies, I don’t understand.”

The answer is puzzling given that the Google device has an encyclopedia of answers about Mohammed, Allah, Buddha, and other religious figures – even Satan.

“It’s almost like Google has taken Jesus and God out of smart audio,” Sams said.

He said Google should reprogram its speaker to be “Jesus-friendly.”

The Amazon Echo (“Alexa”) did offer information about Jesus. And Google Home did refer to Jesus when asked about the Last Supper.​

Jillian Blackwell first ran the experiment and found the same suspicious ignorance from the “smart speaker.” In a video post, she facetiously asked if there was a law requiring the “separation of church and technology.”

“They think just taking Jesus out of everything is politically correct these days and I think that’s the stem of a lot of our problems,” Martin Collins charged. He says he is certain that Google’s removal of Jesus and God is intentional.

“I don’t know if there’s some kind of wizard making these decisions or if it’s some kind of oversight, but whatever it is, they need to address it immediately,” Sams warned.

“This is the hottest technology trend – and spreading like a wildfire. Soon, smart audio will be in our vehicles,” Sams reasoned. “To eliminate ‘Jesus’ from the knowledge base of this technology would be so very alarming.”

Sams appealed to Christians to speak out against such discrimination and censorship.

“We need to help…the generations to come by making sure that we do everything possible to protect and share THE TRUTH,” he posted.

Google admitted it did withhold information about Jesus, but says the company did so not “out of disrespect but instead to ensure respect.”

Responding to the backlash, Google decided to disable all answers about religious figures. A company-issued statement reads, “We’re exploring different solutions and temporarily disabling these responses for religious figures on the Assistant.”

Home speaker/encyclopedias have grown in popularity, with 40 million people in the U.S. – one in every six adults – issuing voice commands and receiving instant answers.  Devices like Google Home or Amazon Echo (“Alexa”) play music on request, call people, and answer questions.