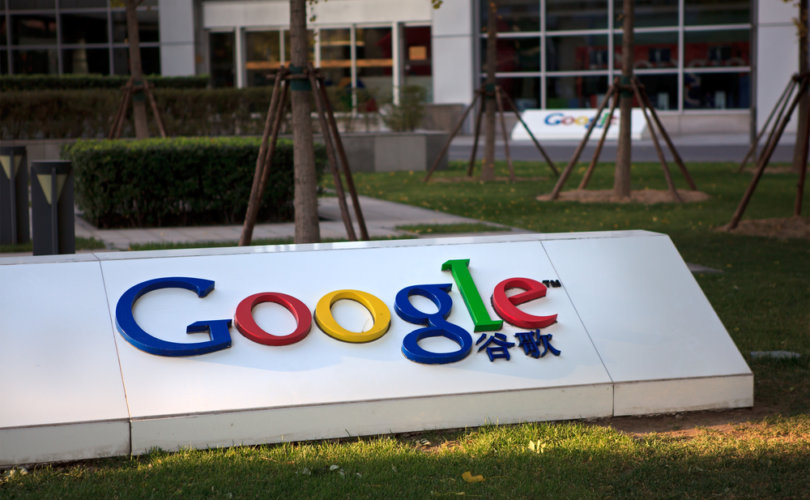 View of outside Google's office in Beijing on Nov 3, 2013 in Beijing, China. Shutterstock.com

July 19, 2019 (LifeSiteNews) – Tech billionaire Peter Thiel recently called on the federal government to investigate Google for potential infiltration by the Chinese government, and now security experts are saying his concerns are well-founded.

Thiel, one of President Donald Trump’s most high-profile gay supporters and an avowed critic of Silicon Valley, made the remarks at last weekend’s National Conservatism Conference, Axios reports. He called on the FBI and CIA to ask Google, “how many foreign intelligence agencies have infiltrated your Manhattan Project for AI”; “does Google's senior management consider itself to have been thoroughly infiltrated by Chinese intelligence”; and whether this alleged infiltration is why the company works with China’s military but not America’s.

“I'm not sure quite how to put this, I would like them to be asked [these questions] in a not excessively gentle manner,” Thiel added.

Alex Stamos, a researcher with the Stanford Internet Observatory and former chief security officer at Facebook, said Tuesday it was “completely reasonable” to assume that both the Chinese and Russian governments have, in some form or another, already infiltrated not only Google but every top tech company:

Note that “subverted” is very different than planting professional spies in “The Americans” style. Each of the big companies employs thousands of employees with family members under the control of these countries, and a gov request might be simple and seem borderline reasonable.

I expect that there will be a major combined HUMINT/InfoSec attack against a major tech company revealed in the next couple of years, which will trigger the same awakening that Project Aurora did in 2009.

BTW, I don’t blame the foreign-born employees at all. They are just trying to make a good living doing interesting work. If MSS had *my* Mom I would do whatever they asked.

Stamos predicted that the “next couple of years” would see the revelation of a “major combined HUMINT/InfoSec [human intelligence/information security] attack against a major tech company.”

He’s not the only one who advises that Thiel’s warnings be taken seriously. Richard Clarke, a former counterterrorism and cybersecurity advisor to both Democrat and Republican presidents, told CNBC Wednesday there was cause for concern.

The internet giant has denied working with the Chinese military, but opened an artificial intelligence center in Shanghai in 2017 despite the Communist regime’s strict speech and internet controls. On Tuesday, Google executive Karan Bhatia testified to the Senate Judiciary Committee that the company has terminated a controversial censored search engine it had been working on for China.

Clarke added that there was no meaningful distinction between Google working with Chinese companies and the Chinese government, given the level of state control in the country.

The specter of foreign influence on the tech industry further intensifies its ongoing controversies regarding political bias and censorship and violations of user privacy. Responding to Thiel’s original comments, President Trump said Tuesday that his administration will “take a look” at the matter.