A Google Doodle celebrates the man who was 'so outrageous and sometimes quite ridiculous.'

Gilbert Baker is the man who, in 1978, dreamed up the rainbow flag as a symbol of the gay movement.

Google chose to honor Baker, who passed away last year at age 65, on his birthday, June 2, with an animated Google Doodle above the famous Google search bar. Strips of colored fabric come together to form the rainbow pattern now familiar to most everyone as a constant reminder of the presence and influence of homosexuals and homosexuality.

In an online statement, Google Doodles said, “Today’s doodle is a little more colorful thanks to Gilbert Baker, creator of the rainbow flag, a symbol of pride and freedom for the LGBTQA+ community.”

One click on the Google Doodle and another on ‘images’ whisks one to a screen awash in rainbow colors, with popular subsearches listed such as “Art,” “Harvey Milk,” and “Obama.” There are aspects of Gilbert’s life, however, that the Google homage fails to mention.

Gay activist Cleve Jones, speaking of his friend, Baker, told the Bay Area Reporter, “He was such a diva. He was so outrageous and sometimes quite ridiculous. We had a lot of wonderful times just dreaming up crazy stuff to do to shock, amaze, or even outrage people.”

Baker was also a drag queen, going by the name “Busty Ross,” cashing in on his notoriety in the LGBT world as the rainbow flag’s creator.

In the early 1990s, Baker marched in the San Francisco Gay Pride parade as “Pink Jesus,” wearing not much more than hot pink paint, a pink crown of thorns, a burnt American flag as a loin cloth, and pink high heels as he carried a cross down Market Street.

Baker’s costume was his statement against mainstream society’s revulsion to artist Andres Serrano’s photographic work titled “Piss Christ,” depicting a small plastic crucifix submerged in a glass of the artist’s own urine. The work had been sponsored in part by the U.S. government’s National Endowment for the Arts. Religion was frequently the object of Baker’s biting humor, and he reveled in his membership in a group of drag queen nuns known as the “Sisters of Perpetual Indulgence.” 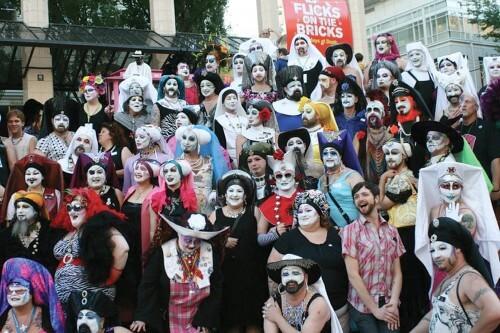 Shown above is the 2011 ‘Conclave of the Sisters of Perpetual Indulgence,’ drawing ‘drag nuns’ from all over the world.

One of the participants, identified as ‘Sister Krissy Fiction’ said, “For the longest time people would be, ‘Oh, you’re mocking nuns and you’re mocking Christianity,’ and I would always be defensive, like, ‘No, we’re not mocking,’ but I’ve kind of changed my view over the years.”

In a recorded interview, Gilbert Baker once said, “I’m all about working every last nerve of the church.”