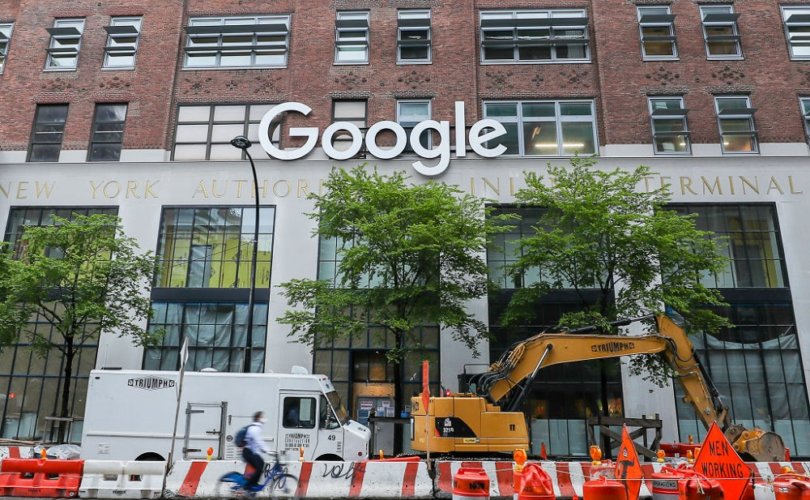 MOUNTAIN VIEW, California, June 17, 2020 (LifeSiteNews) — Google has threatened to refuse access to its advertising platform to conservative news website The Federalist over unspecified claims that the website was violating Google’s policies on content related to race. In response, The Federalist said it had “temporarily” removed its comments section.

NBC News first reported on Tuesday that “Google has banned two far-right websites from its advertising platform after research revealed the tech giant was profiting from articles pushing unsubstantiated claims about the Black Lives Matter protests.”

The television network, one of the so-called Big Three, revealed that it was in fact its very own NBC News Verification Unit that brought the alleged violations of Google’s policies to the tech giant’s attention.

The NBC News Verification Unit, in turn, based its accusations on “research conducted by the Center for Countering Digital Hate, a British nonprofit that combats online hate and misinformation. They found that 10 U.S.-based websites have published what they say are racist articles about the protests, and projected that the websites would make millions of dollars through Google Ads.”

A spokesperson for Google told NBC News that whenever “a page or site violates our policies, we take action. In this case, we’ve removed both sites’ ability to monetize with Google.”

“We have strict publisher policies that govern the content ads can run on and explicitly prohibit derogatory content that promotes hatred, intolerance, violence or discrimination based on race from monetizing,” the spokesperson explained.

Google subsequently clarified on Twitter that “The Federalist was never demonetized. We worked with them to address issues on their site related to the comments section.”

“Our policies do not allow ads to run against dangerous or derogatory content, which includes comments on sites, and we offer guidance and best practices to publishers on how to comply,” Google wrote. “As the comment section has now been removed, we consider this matter resolved and no action will be taken.”

NBC News, meanwhile, has substantially revised its original article, without indicating which changes have been made.

Instead of characterizing both The Federalist and ZeroHedge as “two far-right websites,” only the latter is still slapped with that label.

On Tuesday evening, popular Fox News host Tucker Carlson, slammed Google for its power over media outlets and its attempted censorship of the two conservative websites.

“Most media companies are dependent on Google,” Carlson pointed out. “Google controls 70 percent of all online advertising, so if you’re in the news business, you obey Google. When Google tells you to do something, you do it. You have no choice.”

“They can bankrupt you in a minute and they will,” he continued. “In all of human history, no single entity has ever had more control over information than Google does right now, so if you’re worried about the concentration of power in the hands of a few unaccountable actors, and you very much should be, nobody has more unchecked power than Google does.”

As Carlson explained, “Google says it now holds conservative websites responsible for the comments of their readers. And yet, irony of ironies, thanks to a special carve-out Google has received from the United States Congress (something called Section 230 of the Communications Decency Act, remember that), Google itself is not responsible for content on its platform because the Congress says it doesn’t have to be.”

Brendan Carr, a commissioner of the Federal Communications Commission (FCC), took to Twitter to argue for Section 230 reform, calling out Google’s “hypocrisy.”

“Big Tech has long argued that it needs Section 230’s unique set of liability protections because websites simply couldn’t operate if they were held liable for comments or user-generated posts,” he wrote, adding, “Not so, according to Google’s own ad policy!”

Carr framed NBC News’s involvement in getting Google to censor The Federalist and ZeroHedge as “an example of established media gatekeepers attempting to regain control of the political narrative – not through persuasion but coercion.”

Senator Ted Cruz, a Republican from Texas, sent a letter to Google CEO Sundar Pichai earlier today, accusing Google of “abusing its monopoly power in an effort to censor political speech with which it disagrees.”

Cruz emphasized Google’s anti-conservative bias. “Numerous ‘progressive’ media outlets allow comments[.] … I don’t know what the objectionable comments were that individual users might have posted on The Federalist, but any objective review would no doubt demonstrate at least as many profane, racist, or indefensible user comments on these other sites that would equally violate Google’s alleged standards.”

Republican Representative Jim Jordan from Ohio said, “Americans are sick of this. I mean, this is a direct attack on speech. I think Americans are tired of the press going after certain people, if you don’t have the right position or say the right thing.”