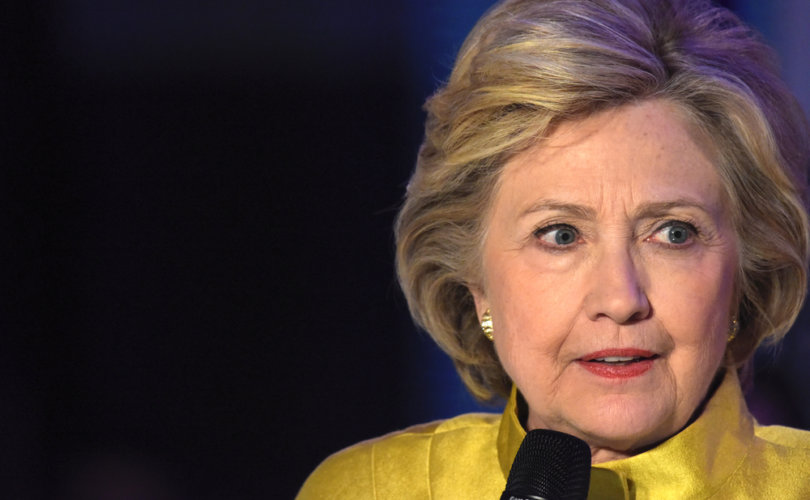 September 11, 2018 (LifeSiteNews) – One of the world’s most influential companies attempted to sway the 2016 presidential election to Hillary Clinton, according to an email chain newly obtained by Breitbart and Fox News.

“We had our partners help spread the word about our features on social media, including YouTubers and influencers like Dulce Candy, Jorge Narvaez, Jessie (&) Joy, Barbara Bermudo, and Pamela Silva of Univision, Jackie Cruz aka La Flaca from Orange is the New Black, and more,” she wrote. “We promoted our partner the Latino Community Foundation’s non-partisan #YoVoyaVotaryTu (I’m going to vote, are you?) campaign and leveraged our social media influencer friends’ reach to hit over 11M impressions with that hashtag.”

Murillo initially claims the initiative was “non-partisan,” but eventually admits that certain efforts, such as partnering with the left-wing group Voto Latino, amounted to a “silent donation,” and outright admits that Google expected their efforts to result in a victory for Democrat nominee Clinton. She shared an Atlantic article from just before the election predicting that Latinos would “save America” by defeating Donald Trump, a tweet that said “Trump is dead” according to early voting in Nevada, and a New Yorker article on Latino voters “Show(ing) Trump What It Means to Be American.”

“Ultimately, after all was said and done, the Latino community did come out to vote, and completely surprised us,” Murillo admitted. “We never anticipated that 29 percent of Latinos would vote for Trump. No one did. We saw headlines like this about early voter turnout and thought that this was finally the year that the ‘sleeping giant’ had awoken.”

She went on to declare that “we really thought we had shown up to demonstrate our political power against a candidate who had vehemently offended our community by calling us rapists and drug dealers.” (Early in the campaign, the president infamously accused Mexico of sending rapists and drug dealers to illegally cross the southern border, but never suggested that Mexicans or Latinos are disproportionately likely to rape or sell drugs.)

The email is full of similar references indicating partisan intent, such as “the voters we wanted to reach,” “we know we gave this our best and are now figuring out what comes next,” “This is devastating for our Democratic Latino community,” and “it hurts more than I could have ever imagined.”

“I’m not sharing my personal opinions very broadly, but wanted to share openly here in the circle of trust,” Murillo added.

Lisa Gevelber, Google’s vice president of global marketing, also forwarded the email to other company executives, crediting those who “worked so hard to ensure all the Get out the Vote were done in Spanish” and whose efforts “made a giant difference.”

In response, a Google spokesperson told Breitbart that Murillo’s email was strictly an expression of “the employee’s personal political views” that didn’t reflect “any official stance from the company.” It insisted that Google’s election-related activities were and continue to be “entirely non-partisan.”

At least one Google insider disagreed, however. Mackenzie Thomas, a Google Search product marketing official, also appears in the email chain, writing that she was forwarding it “not because of the original sender but rather how explicitly it references that her work was 100 percent partisan.”

Fox News host Tucker Carlson highlighted the story Monday night, specifically drawing parallels to the frenzy against “election meddling” in left-wing circles – the policing of which is the stated justification for Google and other tech companies’ crackdowns on free speech over the last two years.

“Democrats and their allies in the press fret that Russian agents may be interfering with our democracy. The root of these fears: a handful of Russian ads on Facebook that almost no one saw, and a small number of efforts to hack Democratic Party email accounts,” Carlson said. “Now, let’s assume that all these worried people are sincere — that they really and deeply care about the integrity of our democracy. Then why have they said almost nothing about the tech monopolies that dominate our exchange of information in this country?”

Google’s “only defense was that the activities described were either non-partisan, or weren’t taken officially by the company,” he said, but “they were both. Plenty of people in Google knew what was going on, and we’ve seen no evidence that anyone at the company disapproved or tried to rein it in.”

Google, which owns YouTube, is one of several online giants accused of suppressing conservative voices.

Last month, a PJ Media analysis found that Google searches for news on the term “trump” overwhelmingly prioritize results from left-wing websites, with only five items from Fox News and the Wall Street Journal breaking the top 100. YouTube has attempted to restrict multiple conservative groups, such as Dennis Prager’s Prager University, under false pretenses, while a recently-revealed internal memo from the far-left Media Matters details the group’s efforts to silence and demontetize any voice it accuses of peddling “fake news.”