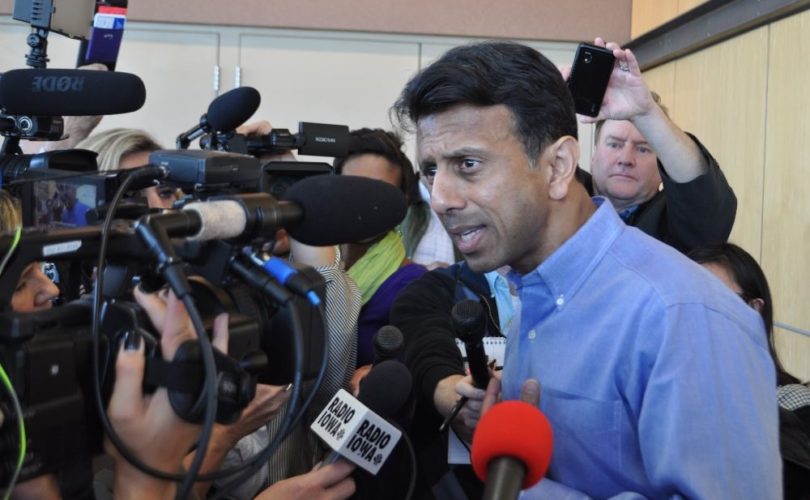 Governors Bobby Jindal and Mike Huckabee and Senator Ted Cruz appeared at the Freedom 2015 National Religious Liberties Conference on Friday. The two-day event, presented by the Denver-area-based Generations, a faith- and liberty-focused ministry, made use of Iowa's first-in-the-nation caucus status to draw more than 1,700 attendees from across the U.S.

The three presidential contenders have all made strong statements in defense of life and religious liberty during their campaigns, with Jindal and Cruz vowing to prosecute Planned Parenthood for its trafficking in human remains and Huckabee holding a rally for embattled Rowan County, Kentucky clerk Kim Davis.

The candidates held the line on these messages before the largely evangelical Christian crowd, each making short appearances among some 30 other religious liberty speakers, before briefly taking questions from the press.

Cruz listed the first five things he would do as president of the United States for the crowd.

After first rescinding the “illegal and unconstitutional executive actions taken by Barack Obama,” Cruz said, he would take on the nation's largest abortion chain, embroiled the last several months in scandal after having been shown on tape to be trafficking in the remains of children aborted at its abortion facilities and illegally targeting abortion procedures for optimal organ harvesting.

“The second thing I intend to do on the first day in office is instruct the United States Department of Justice to open an investigation into Planned Parenthood and to prosecute any and all criminal violations,” Cruz said.

This was echoed by Jindal.

The Louisiana governor also remarked on pushback from the Obama administration for steps he's taken in his state to defund the abortion giant.

“Lawyers suing on behalf of the federal government better get comfortable in Baton Rouge,” Jindal stated. “We will take every chance we can to protect innocent life in the state of Louisiana.”

He also criticized the pro-abortion mentality's denial of the humanity of the unborn.

“We have a bunch of science deniers on the left,” Jindal said.

Huckabee made a pitch for personhood, saying it was the one question to be resolved in the pro-life issue.

“We've fought this battle the wrong way,” Huckabee stated. “Instead, we need to make the left fight to defend the right to kill a baby.”

Regarding religious liberty and the attack on U.S. Christians who support God's plan for marriage resulting from last June's Supreme Court legal redefinition of marriage, the candidates minced no words.

“Make no mistake about it: the left is trying to take away our First Amendment religious liberty rights,” Jindal told the crowd. “When Hillary Clinton tells you she is for your right to religious freedom, all she means is for a couple of hours a week, you have the right to say what you want in church. Folks, that's not religious liberty.”

Jindal said religious freedom is living your life 24 hours a day, seven days a week, according to your religious beliefs, and that no earthly court can change the definition of marriage.

He said the founding fathers understood that America did not create religious liberty; rather, religious liberty created the United States of America. He warned that the fight for religious liberty with regard to marriage is not going away – that more and more, it will begin to affect all Christians, and not just those who provide particular services.

“They're coming after those who want to live life according to our Christian faith,” said Jindal. “It shouldn't take a government executive order to protect our First Amendment rights.”

Huckabee said the courts can't make law. He condemned judicial tyranny, saying as well that as president, he would disregard the Obergefell v. Hodges decision.

“On the same-sex marriage decision, I would simply say, it is not law,” the former Arkansas governor stated. “It is not law because the people's elected representatives have not made it law, and there's nothing in the constitution that gives the Supreme Court the power to make a law.”

“They are the Supreme Court,” Huckabee continued. “They are not the supreme branch or the Supreme Being. They can't make law.”

He also told the conference crowd that the federal government cannot redefine marriage, and that if we lose religious liberty, we lose all liberty.

“It's outrageous to me that there seems to be a very selective enforcement of the First Amendment rights of Americans by the Obama administration and by his Justice Department,” said Huckabee. “If we allow government to take away religious liberty, then we have already begun the process of allowing government to take away every other right we possess.”

Cruz stated that he unequivocally stands with Kim Davis, and that he'd told her while visiting her in jail that she was an inspiration to others.

“Kim Davis was an important moment for the country of focusing the threat that you could be next,” said Cruz.

He pledged to instruct the Department of Justice and the IRS and every agency in the federal government that “the persecution of religious liberty ends today.”

All three wrapped up their messages expressing the need to move forward as a country and to embrace faith while doing so.

Huckabee remarked that the recent elections showed how people are fed up with what they see as failed policies of the left, and he said there is a real problem when terrorists incarcerated at Guantanamo Bay prison get more allowance for religious liberty than Christians or the soldiers guarding them.

Jindal said that even more important than who is elected the next president of the U.S. is the need for a spiritual revival.

Cruz stressed his belief that the country is at a time of crisis, but also that there is power in people standing for their faith.

“I think that it's critical that believers stand up and stand for our values and turn this nation around,” he said.

Judge blocks Louisiana Planned Parenthood defunding: Bobby Jindal vows not to give up

Huckabee: Why support states’ rights on marijuana but not on marriage?