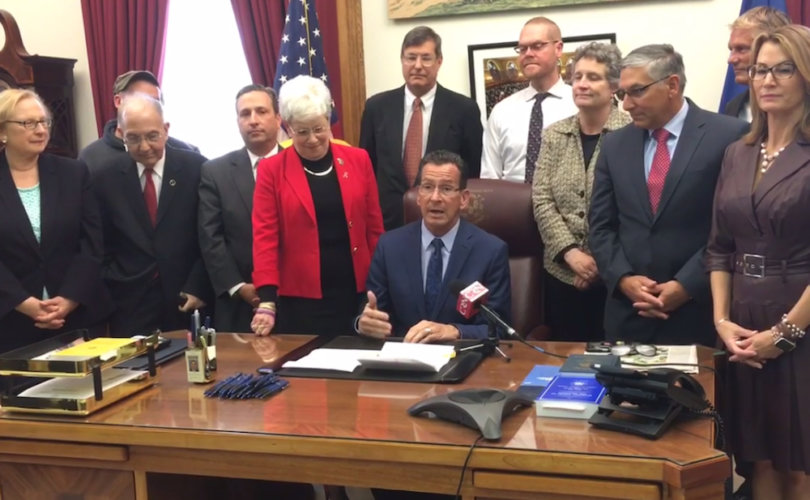 May 12, 2017 (LifeSiteNews) — Connecticut became the sixth state in the nation to ban pro-heterosexual therapy for minors, after not a single Republican (or Democrat) in the state Senate voted against the bill, which Gov. Dannel Malloy signed into law.

Gov. Malloy, a pro-LGBTQ Democrat, rushed to sign the so-called “conversion therapy ban” bill at a ceremony in his office at the Capitol, in what the Hartford Courant called “his fastest bill signing in seven years.”

The bill, SB 6695, “prohibits health care providers or anyone else engaged in trade or commerce from providing conversion therapy.” That term is used and promoted by LGBT and liberal activists to denigrate pro-heterosexual therapy, often called “reparative therapy.” Most media use the politicized “conversion” term.

In signing the bill, the governor said, “This is supported by the science. It's supported by our cultural awakening and awareness that we are a society of many different players and very different folks, and we shouldn't try to make everyone just like us,” he said, according to the Hartford Courant.

No Senate Republicans voted no

The Connecticut Senate voted 36-0 to approve the bill and the state House voted 141-8 to pass it — stunning landslides considering that Republicans made historic gains in both houses riding the coattails of Donald Trump in November.

“There is no real evidence of reparative therapy doing any harm,” said Quinlan, founder and president of the Garden State Families, adding that claims by LGBT activists of therapeutic “coercion” are unfounded. “There is no electric shock, there are no IVs to induce vomiting. It’s talk therapy, like any other therapy.”

“While gay activists continue to get cheap victories in liberal states like Connecticut, the ones that are losing are vulnerable young people who are conflicted and confused about their sexual and gender identity, some of whom arrived at their confusion due to sexual molestation,” said Doyle, who has fought liberal bans against reparative therapy across the country.

“So now, the state has raped them again: first, at the hands of their abusers, and second, at the hands of ignorant politicians who know nothing about mental health or the young people whom they are supposedly protecting,” he said.

A recent meta-analysis in the journal The New Atlantis by leading psychiatric scholars Lawrence Mayer, Ph.D, and Dr. Paul McHugh found that “compared to heterosexuals, non-heterosexuals are about two to three times as likely to have experienced childhood sexual abuse.”

“Instead of protecting the rights of minors, these politicians are lining their pockets with political kickbacks from gay activists. Shame on them!” said the Virginia-based Doyle, who also heads up the ex-“gay” group Equality and Justice for All.

“The reason that Connecticut is taking this step is really the confluence of evidence about this treatment,” said Sen. Beth Bye, D-West Hartford, reported the CTPost. Sen. Bye is “a lesbian who cited that 40 organizations, including all mental-health professionals, supported the legislation,” according to the report.

LifeSiteNews spoke with several grassroots pro-family activists involved in opposing this legislation. Most were disappointed that the Connecticut Catholic Conference did not play a leading role in fighting against it.

According to several sources, some speaking on background, the Catholic Conference barely resisted SB 6695, putting forth no direct lobby effort in the Capitol and getting involved only in the last couple of days before its passage to attempt to ensure that it did not undermine religious freedom.

A call seeking comment from the Connecticut Catholic Conference was not returned.

CJ Doyle, chairman of the Boston-based Catholic Action League, told LifeSiteNews that “as a general matter, the [Catholic] Church has been very tepid in resisting the homosexual agenda. Unfortunately, while they’re still willing to take a strong position against abortion, they’re weak on homosexuality.”

Doyle extended the reluctance to oppose the LGBTQ agenda to the Republicans and politicians in general.

“The liberals are aggressive and malevolent,” he said. “The conservatives run for cover. … It’s pretty obvious who’s going to prevail here.”

He said the anti-heterosexual-therapy law demonstrates the “totalitarian” tendencies of the homosexual-transgender movement: “This intrudes into the parent-child relationship,” he said, “another characteristic of totalitarian societies.

The new Connecticut law defines “Conversion therapy” as “any practice or treatment administered to a person under 18 years of age that seeks to change the person's sexual orientation or gender identity, including, but not limited to, any effort to change gender expression or to eliminate or reduce sexual or romantic attraction or feelings toward persons of the same gender.”

Notably, the law states that “’conversion therapy’ does not include counseling intended to … assist a person undergoing gender transition,” and as well as other LGBT-affirming interventions.

One group that did fight SB 6695 head on was Mass Resistance. Bill Brown, a Connecticut activist affiliated with MR, hand-delivered informational sheets opposing the LGBTQ bill.

“Bill HB 6695 is deceptively and dishonestly titled An Act Concerning the Protection of Youth from Conversion Therapy. In fact, it puts vulnerable kids in danger – to support a radical ideology. It would make it illegal for licensed therapists to help children deal with traumatic issues leading to homosexual or transgender behavior,” said the Mass Resistance flier.

“Homosexual and transgender behavior in children is very often a result of early sexual trauma such as sexual molestation, rape, exposure to pornography, abuse, or serious issues with one or both parents. Victimized youth can become further traumatized and even suicidal,” the MR flier states. “Skilled mental health professionals can often help them heal their severe emotional wounds and work through these issues. For many, it is literally a lifesaver.”

Brown told LifeSiteNews that he believes so few Republicans voted against the bill as part of a Senate strategy — which he disagrees with — of “playing it safe so they don’t look mean so they can get one more Republican senator in the next election.”

The Connecticut Senate is evenly split between Republicans and Democrats for the first time in decades.

Mass Resistance national founder and president Brian Camenker told LifeSiteNews that “Connecticut is unusual. There are lot of liberal states where this type of legislation has been killed,” noting it has been defeated twice in his own deep-blue state of Massachusetts.

Peter Wolfgang, executive director of the Family Institute of Connecticut, like Doyle, said SB 6695  was a “solution in search of a problem,” since “we had not been able to identify a single program in CT that would be outlawed by the bill.”

Wolgang favored an approach of amending the legislation to limit its potential to undermine religious freedom in other areas.

Doyle said, “During the entire legislative session, our Task Force could not find one licensed practitioner that actually worked with youth in any way remotely close to what the liberal-dominated legislature described. But that didn't stop them from banning a practice called ‘conversion therapy.’”

He said that term “was coined by gay activists to make the public believe that gay youth are being converted from ‘gay to straight.’ The reality is that licensed counselors do not convert gay youth, especially in coercive and tortuous ways that these activists are claiming.”

Doyle said the “lies of gay activists, including the Southern Poverty Law Center, Human Rights Campaign, and National Center for Lesbian Rights, who are the organizations lobbying for these bills, are so fraudulent” that his National Task Force for Therapy Equality filed a formal complaint with the Federal Trade Commission last week to set the record straight for legislators and the wider public.