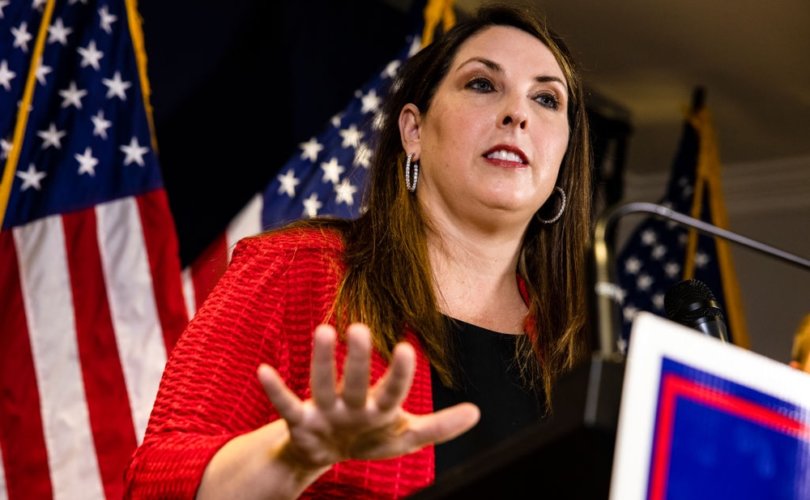 McDaniel blasted the company in a June 29 Twitter thread, arguing that “Big Tech’s bias is out of control.”

“Every single month – for seven months in a row – Google has systematically attacked the RNC’s email fundraising during important donation days at the end of the month,” the GOP chairwoman said, sharing a graphic showing the RNC “emails go from strong inbox delivery (90%-100%) down to 0%.”

Big Tech’s bias is out of control.

Every single month – for 7 months in a row – Google has systematically attacked the RNC’s email fundraising during important donation days at the end of the month.

Axios reported that the RNC has “shared internal data showing regular and dramatic increases in the number of its fundraising and voter-activation emails being sent to Gmail recipients’ spam folder.”

In the Twitter thread, McDaniel explained that “[t]hese are emails that go to our most engaged, opt-in supporters.”

According to McDaniel, the major increase in RNC emails being flagged as spam come “without any increase in user complaints, changes to the content, email frequency or target audiences that could account for the suppression,” and occur just ahead of critical periods “when voters are most engaged.”

Google told Axios that the Big Tech company’s spam filter does “not filter emails based on political affiliation,” and will work to make sure political emails do not get accidentally labeled as spam.

In addition, Google spokesperson José Castañeda told the outlet in an email that the company “recently asked the Federal Election Commission to advise us on a potential pilot for political bulk senders that would provide more transparency into email deliverability, while still letting users protect their inboxes by unsubscribing or labeling emails as spam.”

However, McDaniel said the Silicon Valley corporation is deliberately “censoring Republican emails,” adding that despite filing a complaint with the Federal Election Commission over the “unacceptable” practice, “it just keeps happening.”

“Google has failed to explain why this is happening,” McDaniel said, arguing that “Big Tech needs to be held accountable.”

Google has failed to explain why this is happening. It’s unacceptable. We have filed a complaint with the FEC over this practice of censoring Republican emails and it just keeps happening.

This isn’t the first time a major Big Tech company has been taken to task for suppressing conservative views.

In 2018, a report suggested that Twitter was “shadow-banning” several conservative members of Congress, including McDaniel. The GOP chairwoman responded to the news at the time by observing that suppression of certain political views “should concern every American” and “Twitter owes the public answers.”

Rampant censorship of right-of-center views online, including the suppression of the true Hunter Biden laptop story and the permanent banning of former U.S. President Donald Trump has led to heightened concern among conservatives regarding the scope of free speech online.

Billionaire entrepreneur Elon Musk has repeatedly affirmed that his $44 billion bid to purchase Twitter has been largely inspired by his interest in opening up freedom of speech on the platform.