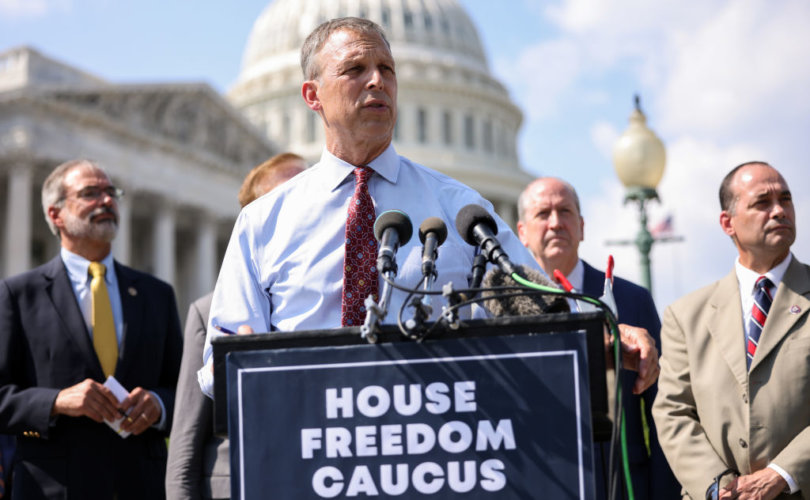 U.S. Rep. Scott Perry (R-PA), joined by members of the House Freedom Caucus, speaks at a news conference on the infrastructure bill outside the Capitol Building on August 23, 2021 in Washington, DC. Kevin Dietsch/Getty Images

WASHINGTON, D.C. (LifeSiteNews) — A Republican Congressman who supported Democrat legislation to enshrine same-sex “marriage” in federal law has expressed regret for his vote, and now calls on Republicans to oppose the final version.

47 House Republicans joined Democrats in July to pass the so-called “Respect for Marriage Act” (RMA), which would repeal the longstanding (but unenforced) Defense of Marriage Act (which recognized marriage as a man-woman union in federal law and protected states’ rights to do the same), federally recognize any “marriage” lawfully performed by any state, and force every state to recognize any “marriage” of any other state “between 2 individuals,” without regard for “the sex, race, ethnicity, or national origin of those individuals”; and contained language potentially obliging the federal government to recognize polygamous unions.

Among those 47 Republicans was Rep. Scott Perry of Pennsylvania, who has come to regret his vote. The Washington Stand reports that Perry recently discussed the situation with Family Research Council President Tony Perkins, explaining that Democrats rushed the bill to a vote without adequate time to review or contemplate its contents, resulting in the perception that a “no” vote would effectively be voting against interracial marriage.

“I had to vote almost immediately,” Perry said. “And I calculated incorrectly. And maybe that’s the best way to put it — that my long-standing support of traditional marriage would be understood, and I didn’t want to vote against interracial marriage. And that’s the same trick they’re playing now.”

Perry also expressed hope that the House will return to regular order, under which legislation is reviewed by committee and deliberated on before floor votes, when taking over in January. “That’s exactly what I and other members of the Freedom Caucus and […] even members-elect that just came to Congress are fighting for right now,” he said, “to make sure that we, among other things, have time to read the bills. There hasn’t been an amendment on the floor in six years. You can’t even represent your district. All of that stuff has to end. And we are fighting for that. We shouldn’t have to fight for it, quite honestly, but we are right now.”

For months, tensions swirled over whether ten Republicans would join Democrats to pass the RMA in the Senate in order to send it to President Joe Biden’s desk, with conservative and pro-family groups working to lobby against it. Earlier this month, supporters unveiled amended details meant to satisfy moderate Republicans, including clarification that the RMA would not lay groundwork for recognizing polygamy and ostensibly affirming the religious liberty and conscience rights of religious nonprofits. Conservatives warned that the changes would not adequately protect private citizens from being coerced into affirming homosexual unions.

Nevertheless, the Senate voted 62-37 to advance the amended RMA, with twelve Republicans joining all Democrats. Because the bill’s language differs from that passed in July, it must go back to the House for an additional vote, which is expected to pass.

With the reelections of Mitch McConnell to lead Republicans in the Senate and Kevin McCarthy in the House, the GOP appears poised to continue its current trajectory on marriage for the foreseeable future, unless new leaders are able to marshal enough political capital to force a different direction in future elections.