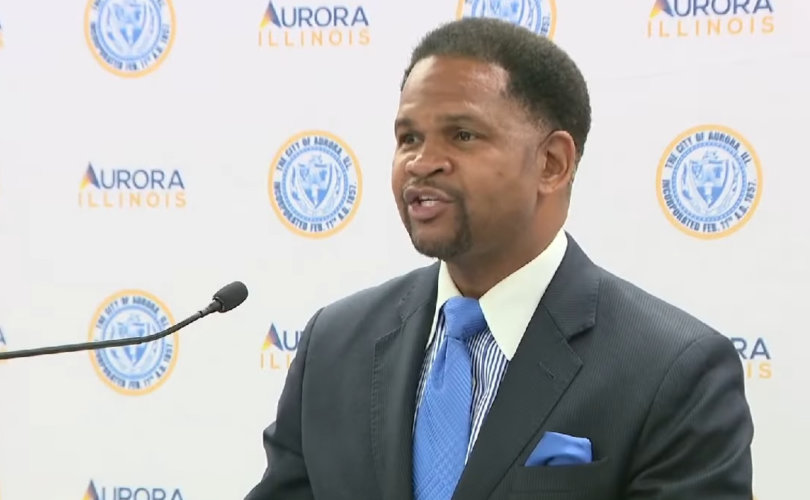 (LifeSiteNews) — The Republican establishment in Illinois is getting behind the liberal mayor of Aurora to be the next governor of the state.

Mayor Richard Irvin is one of a handful of candidates running for the GOP nomination for the 2022 gubernatorial elections. But he has a record of supporting liberal policies and causes.

“Let me tell you, I think it’s important for people to protect themselves by getting vaccinated and boosted if they choose to. I’ve never been one for mandates,” Irvin told NBC 5 last week. But Aurora, where he serves as mayor, mandated that all city workers get jabbed or undergo weekly testing.

“The mandate applies to all non-exempt, executive, seasonal, temporary and contracted employees, as well as the Aurora Fire Department,” WGN reported in October 2021. “Employees who are not in compliance will be prohibited from reporting to work on city premises or using city vehicles.”

He has also directed taxpayer dollars to the city’s homosexual “Pride Parade” and joined in marching in it.

“I don’t believe a monetary gap should stop the momentum gained from last year’s inaugural parade,” Irvin said in April 2019, according to Patch.com.  That’s why he gave $3,000 in tax dollars to the homosexual march and encouraged others to give money to support the cause — the parade would have been canceled but Irvin intervened to convince “progressive community advocacy group” Indivisible Aurora to move forward.

“It swells my heart to see everyone loving and caring for each other,” Mayor Irvin said at the event. “Knowing that today is about pride and our community being together as one people. Today is special for the city of Aurora, today is good for the city,” Irvin said, according to NCTV 17.

Irvin’s consultants are the same ones who have pushed pro-homosexual agenda, pro-abortion politicians in the state for years. “Irvin was recruited to run — and his campaign organized — by a network of GOP political operatives with ties to former GOP Gov. Bruce Rauner and ex-Sen. Mark Kirk,” the Chicago Sun-Times reported.

Rauner ran in 2014 and said he had “no social agenda,” according to an ad featuring his wife Diana, a “lifelong Democrat” and supporter of abortion organizations.

But as governor he signed into law bills mandating so-called abortion counseling for pregnant women and required taxpayers to pay for abortions through Medicaid. He also officiated at a same-sex “wedding.” He signed legislation to allow gender dysphoric individuals to get a new birth certificate that lists the opposite sex.

Former Sen. Kirk supported abortion, homosexual “marriage,” and was one of only a few Republicans to support legislation in Congress that would strip religious freedom protections from pro-life businesses like Hobby Lobby that did not want to cover abortifacient birth control under Obamacare.

However, Irvin’s record on abortion is more conservative than his history with vaccine mandates and homosexual advocacy.

His running mate is state representative Avery Bourne, a pro-life millennial with a record of opposing abortion.

The Irvin-Bourne campaign did not respond to a LifeSiteNews request for comment clarifying the Aurora mayor’s position on vaccine mandates, so-called LGBT issues such as bathroom policies and “hormone therapy” for children, and his stance on abortion.