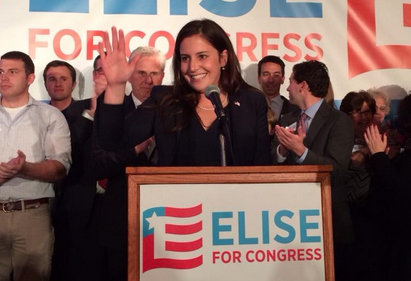 WASHINGTON, D.C. (LifeSiteNews) — Two of the Republicans elected this week to two of the most powerful positions in House GOP leadership have voted in favor of Democrat legislation to enshrine same-sex “marriage” in federal law, a sign that a long-simmering disconnect between party heads and grassroots voters is unlikely to change soon.

Many conservatives see the leadership votes as a frustrating retention of figures who share responsibility for last week’s disappointing midterm election results.

Emmer and Stefanik were both among the 47 House Republicans who joined Democrats in July to pass the so-called “Respect for Marriage Act” (RMA) that would repeal the longstanding (but unenforced) Defense of Marriage Act (which recognized marriage as a man-woman union in federal law and protected states’ rights to do the same), federally recognize any “marriage” lawfully performed by any state, and force every state to recognize any “marriage” of any other state “between two individuals,” without regard for “the sex, race, ethnicity, or national origin of those individuals.”

Notably, under the text passed in July, states would only have to recognize one another’s same-sex “marriages,” but the federal government would have to recognize any new union a state comes up with, such as a marriage of more than two people, potentially setting up a pretext for future activists to dismantle a new “inequality.”

Both lawmakers also voted in June 2016 for an amendment requiring federal contractors imposing LGBT “nondiscrimination” rules on federal contractors. Stefanik also temporarily supported the “Fairness for All Act,” a presumed moderate alternative to the far-left “Equality Act,” until conservative pushback on its religious-liberty ramifications led her to withdraw.

For months, tensions have swirled over whether 10 more Republicans would join Democrats to pass the RMA in the Senate in order to send it to President Joe Biden for a signature, with conservative and pro-family groups working to lobby against it.

On Monday, supporters of the bill unveiled amended details meant to satisfy moderate Republicans, including clarification that the RMA would not lay groundwork for recognizing polygamy and affirming the religious liberty and conscience rights of religious nonprofits.

On Wednesday, Alliance Defending Freedom senior counsel Greg Baylor warned that the changes offer little more than “lip service” while “completely ignoring the most critical ways the bill threatens basic religious freedom,” noting that the bill does nothing to address the rights of religious business owners like Colorado baker Jack Phillips, who has been subjected to years of lawsuits despite the existing federal protections that the amended RMA invokes.

“The Respect for Marriage Act goes well beyond the scope of Obergefell [v. Hodges, the 2015 Supreme Court ruling forcing all 50 states to recognize same-sex ‘marriage’], empowering the government and activist organizations to violate the constitutional freedoms of millions of Americans to speak and live according to their faith,” Baylor wrote. “If today’s existing conscience protections are not adequately protecting religious Americans now, it’s nonsensical to believe they would afford protection under a more expansive enforcement regime as designed in the bill.”

Nevertheless, the Senate voted 62-37 on Wednesday to pass the amended RMA, with 12 Republicans joining all Democrats. Because the bill’s language differs from that passed in July, it must now go back to the House for an additional vote.

Prominent conservative voices such as The Daily Wire’s Ben Shapiro and Matt Walsh have argued that lawmakers who support codifying same-sex “marriage” in federal law do not belong in the Republican Party:

Ben Shapiro tells any Republican senator voting for the codification of same-sex marriage: "You should not be in the Republican Party" pic.twitter.com/qmM4JJk4rJ

Conservative groups such as LifeSiteNews, Alliance Defending Freedom, Family Research Council, American Family Association, and Concerned Women for America have been petitioning Republicans to make them aware of grassroots opposition to the bill, and urging them to vote against it accordingly.