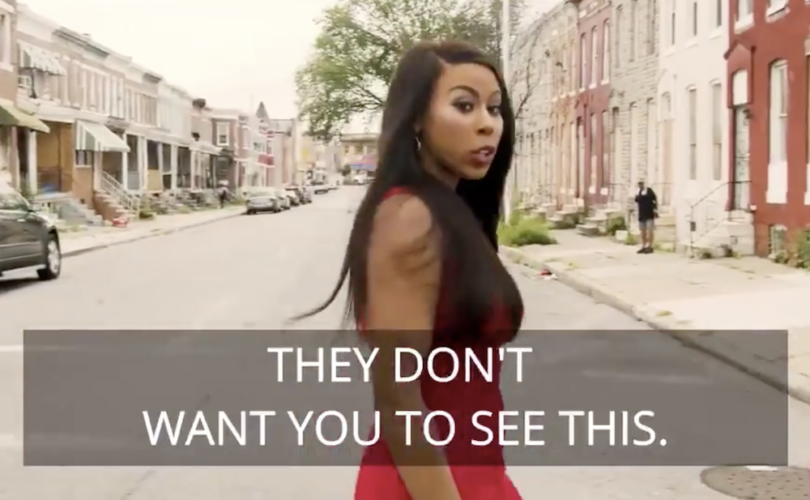 UPDATE, August 19, 2020: This report has been updated to include additional information about Kimberly Klacik’s stance on abortion.

BALTIMORE, August 18, 2020 (LifeSiteNews) – Re-electing Democrats is the last thing voters should do if they truly care about black lives, argues a black female Republican candidate in a new video that quickly went viral this week.

Kimberly Klacik, who is running for the House of Representatives in Maryland’s 7th Congressional District against incumbent Democrat Rep. Kweisi Mfume (for the seat held by the late Democrat Rep. Elijah Cummings), released an ad Monday afternoon that followed her as she toured the streets of Baltimore, Maryland, as a visual representation of the city’s half-century of Democrat control.

Democrats don’t want you to see this.

They’re scared that I’m exposing what life is like in Democrat run cities.

That’s why I’m running for Congress
Because All Black Lives Matter
Baltimore Matters
And black people don’t have to vote Democrat
Help us win https://t.co/CSOjc9aQlS pic.twitter.com/XnEDTaDDIG

“This is the reality for black people every single day: crumbling infrastructure, abandoned homes, poverty, and crime,” Klacik says as she passes empty sidewalks and decrepit buildings covered with overrun plants and smashed windows. “Baltimore has been run by the Democrat Party for 53 years. What is the result of their decades of leadership?”

“Baltimore is one of the top five most dangerous cities in America,” she continues. “The murder rate in Baltimore is 10 times the U.S. average. The Baltimore poverty rate is over 20 percent. Homicide, drug, and alcohol deaths are skyrocketing in our city. … The vast majority of crime in Baltimore is perpetrated against black people, who make up 60 percent of the population.”

“The Democrat Party have betrayed the black people of Baltimore,” Klacik declares. “Go to any Baltimore neighborhood and ask this question: do you want to defund the police?”

The video then shows three black residents answer the question with an emphatic no. “I had three sons killed in Baltimore City. And I think if we defund the police office it’s gonna be worse than that,” one man says. “What are you gonna defund the police for?” another asks. “Why? How do you defend your city, your community? Families are losing people!”

“It’s not just Baltimore,” Klacik resumes. “The worst place for a black person to live in America is a Democrat-controlled city. It’s 2020. Name a blue city where black people’s lives have gotten better.”

The real estate database service NeighborhoodScout lists provides an annual list of the top 100 most dangerous cities in America, based on FBI violent crime statistics. The Daily Signal noted that, for their 2020 list, 18 of the top 20 cities are led by Democrat mayors.

“How are children supposed to live here and play here?” she asks.

“Democrats think black people are stupid,” the candidate concludes. “They think they can control us forever. That we won’t demand better, and that we’ll keep voting for them forever, despite what they’ve done to our families and our communities.”

The video rapidly spread across social media, accumulating more than 180,000 likes and almost 100,000 retweets in less than a day. As of the time of this writing, it has been viewed 4.2 million times.

The video stands as a stark rebuke to the anti-police sentiment dominating the Black Lives Matter (BLM) movement, which began at the end of May, after the death of Minnesota man George Floyd at the hands of a white officer. Despite the officer quickly being fired and charged with murder, the incident triggered a resurgence for BLM, which cast law enforcement nationwide as a systemically racist institution.

Though it remains to be seen whether Klacik can prevail in her longtime-Democrat district, evidence suggests her message has real potential to resonate with black voters nationally. A Gallup poll completed last month found that, despite BLM’s demands, a combined 81 percent of black respondents said they either support the current level of police presence in their communities or would favor an even larger presence.

As for Klacik, her own public statements indicate a mixed stance on life issues. On her campaign website and in a January YouTube video, she suggests that legislators’ focus should not be on abortion itself, but on preventing the “need” to abort by offering (and perhaps even subsidizing) birth control pills without a prescription, as well as working to improve reporting requirements for abortion statistics. In fact, however, some birth control methods would not truly be an alternative to abortion, because they can function by aborting an already-conceived human. Klacik does stress she does not support Plan B, which she calls “dangerous.”

In December 2019, she told Red Maryland that her position on life issues was simply that “murder is murder.” She did not say whether she would support a Human Life Amendment to the US Constitution.