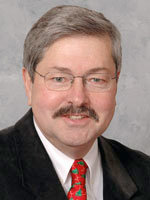 DES MOINES, Iowa, October 5, 2015 (LifeSiteNews) – Iowa's GOP governor says he doesn't have the legal authority to to defund Planned Parenthood – something that he had said he supported doing while campaigning five years ago.

Earlier this year, Governor Terri Branstad had ordered a review of Planned Parenthood funding. But he now says that the results of that review mean he can't pursue defunding any futher.

“It appears to me, and the advice that we have received from the attorney general's office, is that we cannot defund Planned Parenthood,” Branstad said last week, according to The Des Moines Register. “The attorney general's office has notified us that we don't have reasons; [Planned Parenthood hasn't] violated their responsibilities under the grants that they have received from the state.”

Five years ago, Branstad said in a debate, “I think that certainly funding for groups like Planned Parenthood that are using tax monies and involved in promoting abortion – although the money they get from the state may not be used for abortions, I don't think the state should be funding that.”

The conservative group The Family Leader says Branstad has all the reason he needs to pull funding. President Bob Vander Plaats asked how “an open, pending case investigating Planned Parenthood for scamming state and federal taxpayers [is] not sufficient legal ground to suspend their contracts and Medicaid provider eligibility[.]”

A spokesperson for Planned Parenthood of the Heartland says Vander Plaats's comments are not relevant to defunding efforts. Angie Remington said that while her group is involved in a lawsuit by a former employee claiming that Medicaid fraud took place, “we deny those allegations and have no other statement to make on that case, which is still being litigated.”

Remington also said that Vander Plaats's reference to the fraud case has nothing to do with “recent and widely discredited attacks on Planned Parenthood, although it certainly seems as though The Family Leader is attempting to fool the media into believing it is.”

The Register reports that Branstad indicated openness to exploring options that would block taxpayer funding for America's largest abortion company. He was immediately urged by State Senator Jason Schultz to change his mind. “I believe the governor is a well-meaning man, but I would ask him to search inside and ask if this is really well serving to Iowans,” Schultz said.

Pressure for defunding has come from other circles. Iowa Right to Life has a petition with more than 14,000 signatures that “encourage[s] the Governor and the Iowa Legislature to direct Departments to decline any federal health care grants, loans or other programs that fail to allow the State to direct the funding consistent with its own priorities. We want to see an end to taxpayer funded abortions in Iowa and instead have family planning funds directed to health care providers that do not perform or promote abortions.”

GOP presidential candidate and Louisiana governor Bobby Jindal has also called upon Branstad to pull all of Planned Parenthood's state funding in Iowa.