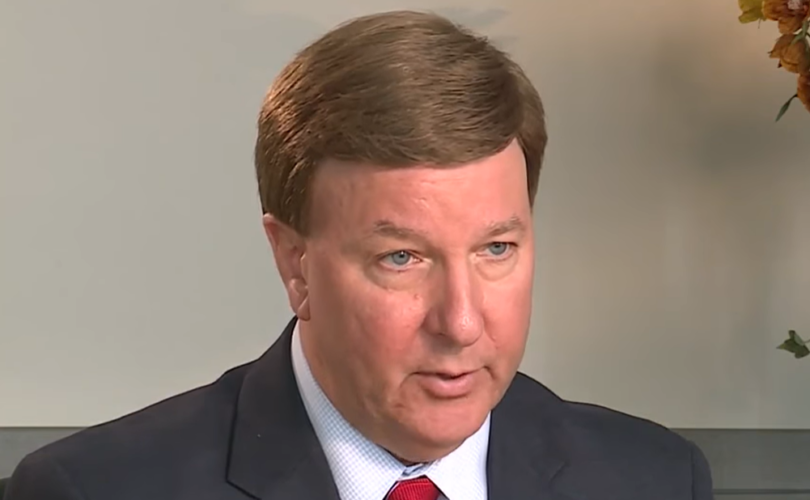 (LifeSiteNews) — A U.S. representative yesterday rolled out legislation that would withdraw the United States from the United Nations and the World Health Organization, citing corruption shown by what he says is a submission to China.

U.S. Rep. Mike Rogers, the top Republican on the House Armed Services Committee, on Monday announced the reintroduction of the American Sovereignty Restoration Act of 2022, which effectively “terminat[es] all membership by the United States in the United Nations” and cuts all funding to the UN.

The act also repeals the 1948 resolution by which the U.S. joined the WHO, which Rogers called “corrupt.”

Rogers explained in a press release that, contrary to the UN’s founding ideal to defend human rights, the UN has now essentially yielded to the genocidal Chinese Communist Party, making the international body complicit in China’s egregious human rights abuses.

According to Rogers, Michelle Bachelet, the UN High Commissioner for Human Rights, “has proven herself to be nothing more than a puppet for the Chinese Communist Party – aiding the CCP in playing down the very real and horrifying genocide being carried out against Uyghurs.”

Numerous former inmates of “re-education” camps in China have publicly testified that Uyghurs and other Turkic Muslims have been systematically tortured, with atrocities such as forced abortions and rape being inflicted on the inmates, leaving them traumatized or dead. Fox News has called the evidence that China is carrying out genocide “overwhelming.”

A UN report indicates that during Bachelet’s recent visit to China, she did not directly address its human rights abuses such as torture and forced sterilizations, but used CCP euphemisms to refer to the brutal camps. For example, she referred to “counterterrorism” measures, a reference to the CCP’s pretext for the imprisonment of Uyghurs.

The UN report stated that Bachelet “raised questions and concerns about the application of” so-called “counterterrorism and de-radicalization measures,” and “encouraged the government” to review such “de-radicalization policies” and “ensure they fully comply with international human rights standards.”

In addition, Bachelet reportedly praised China for “tremendous achievements” in lessening poverty and for its “introduction of universal health care,” among other measures.

She also made clear beforehand that the visit was not an “investigation.” Former UN Ambassador Nikki Haley had remarked regarding Bachelet’s visit, “The United Nations Human Rights Council is not worth its name if it does anything other than completely and openly investigate the genocide and condemn the Chinese Communist government’s atrocities.”

“If this becomes just one more Chinese publicity stunt, then the Human Rights Council will add insult to injury to the people suffering under China’s brutality,” she continued.

Rogers also called the WHO “corrupt,” elaborating in a statement, “The WHO lost all credibility when they chose to put public health second to the Chinese Communist Party by helping the CCP cover up the origins of COVID-19,” said Rogers, according to a press release.

This accusation has been echoed by a number of critics, such as Judicial Watch president Tom Fitton, who remarked after the release of emails involving WHO correspondence regarding COVID-19 that the emails “show WHO and Fauci’s NIH special accommodations to Chinese communist efforts to control information about COVID-19.”

“It’s clear the U.N. has abandoned the ideals set in its founding charter and that’s why, among many other reasons, I’ve reintroduced legislation to withdraw the United States from the U.N.,” Rogers stated.

The American Sovereignty Restoration Act of 2022 is an iteration of similar legislation introduced by Rogers in 2015, which never reached the floor of the U.S. House of Representatives.

“We believe that the jarring and public capitulations to the CCP by the U.N. and the WHO in the past two years will bring a renewed interest in Rep. Rogers’ bill,” an aide of Rogers told Fox News.