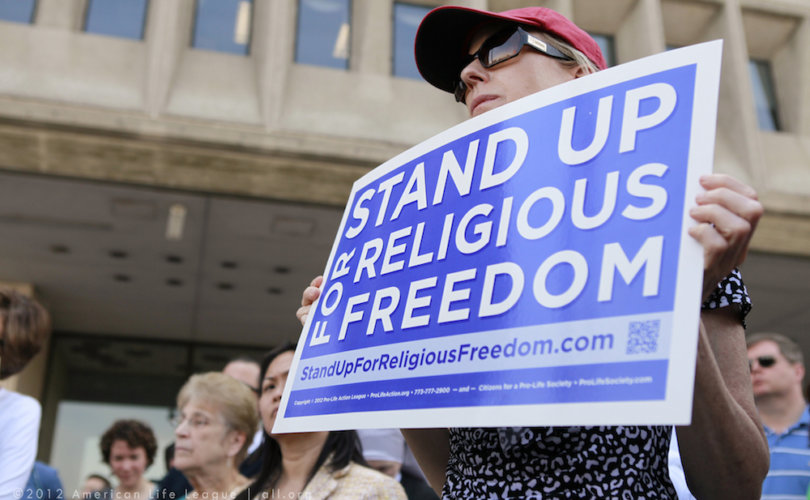 April 27, 2017 (LifeSiteNews) — Fifty-two Republican Congressmen have asked President Trump to issue the Feb. 2 draft “executive order” defending religious liberty that was shelved, reportedly with the influence of Trump's daughter, Ivanka, after being pilloried by the pro-LGBT Left.

In an April 5 letter, Rep. Jim Jordan, R-Ohio, Rep. Mark Meadows, R-NC, and 50 other GOP congressmen asked the president to live up to his campaign promise to defend religious liberty by taking executive and legislative actions to “provide a shield from federal assaults on religious freedom.”

“Because religious liberty is of such importance and under such threat, we believe that the draft executive order should be signed without delay and that all of the protections discussed in this letter should be enshrined permanently into our law,” the letter states.

In addition to the proposed executive order, the House members asked for Trump's help to “adopt executive and legislative protections that prohibit government discrimination against healthcare providers that decline to participate in or perform abortion.”

It approvingly cites H.R. 644, the Conscience Protection Act, sponsored by Rep. Diane Black, R-TN, which  it says Trump has “pledged to sign into law.” Rep. Black has reintroduced the bill, which passed the House last year by a 245-182 vote along party lines.

Another bill touted by the Congressmen is H.R. 781, the Free Speech Fairness Act, which protects non-profits and churches from “the specter of an [IRS] investigation for incidental references to political events or candidates.”

The letter reminds Trump that, “During your campaign, you repeatedly expressed your commitment to defending religious liberties enshrined in our founding documents stating that, ' … the first priority of my administration will be to preserve and protect our religious liberty. The First Amendment guarantees our right to practice our faith as we see fit … all the time, always, wherever.’ We share that sentiment in full and request that you sign the draft executive order on religious liberty, as reported by numerous [media] outlets on February 2, 2017, in order to protect millions of Americans whose religious freedom has been attacked or threatened over the last eight years.”

The draft executive order, which was leaked to the leftist publication The Nation on February 1, quickly earned plaudits from leading social conservatives like Heritage Foundation’s Ryan Anderson and Erick Erickson, founder of Red State. But LGBT activists and their allies blasted away at it, characterizing the floated Trump order as inimical to “gay” and “transgender” “rights.”

Days later, Politico reported that Ivanka Trump and her husband (Donald Trump’s son-in-law), Jared Kushner, both White House advisers, used their insiders’ clout to help sink the floated religious freedom mandate — one of several actions by the power couple that have made conservatives wary of their liberal influence on President Trump.

Ivanka Trump reportedly converted to the orthodox Judaism of Kushner before their 2009 marriage, but traditional practitioners of Orthodox Judaism question their social liberalism, especially their strong support for homosexual “rights,” as LifeSiteNews reported.

Kushner and Trump served as honorary co-hosts for a 2011 fundraiser promoting the legalization of homosexuality-based “marriage” in New York state — unheard of for morally traditional orthodox Jews. Historically adherents to orthodox Judaism believe that homosexual behavior (sodomy) is an abomination and condemn any recognition or promotion of “rights” based on this egregious sin. (Orthodox Jews, like biblically faithful Christians, believe that the sinful pull of homosexuality can be overcome with God’s help.)

There remains widespread hope and speculation among conservatives, including prominent pro-family leaders and unofficial Trump advisors like Ken Blackwell, that Trump will unveil a strong executive order protecting religious liberty in the days or weeks ahead. Blackwell told LifeSiteNews that Trump’s team will “dismantle” Obama’s “aggressive LGBT agenda.”

The congressional letter to Trump states, “The draft executive order would undo the unworkable Health and Human Services (HHS) contraception mandate and also ensure that Americans are not coerced to buy abortion coverage under Obamacare exchange plans.

“Although the U.S. Supreme Court blocked enforcement of the contraceptive mandate against the Little Sisters of the Poor, absent a full Obamacare repeal, there remains a need for your administration to protect organizations and individuals from being coerced into providing or purchasing health coverage in violation of their faith and conscience,” it states.

Pro-life and pro-family advocates are outraged that Trump has not yet buried the government’s legal prosecution of Little Sisters of the Poor caused by Obama’s intrusive HHS contraception mandate.

The congressional letter expresses “strong support” for the Russell Amendment to the House-passed NDAA (National Defense Authorization Act), which, it said, “would ensure that long-standing federal religious freedom protections for religious organizations would not be forfeited merely because they partner with the federal government.”

The Supreme Court will soon rule on this issue in a case involving a Christian preschool in Missouri denied state funds for playground equipment due to the school’s religious nature.