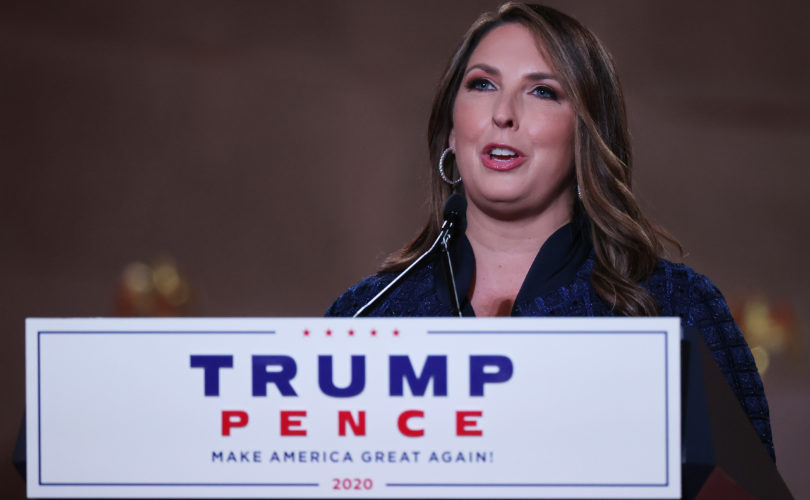 “Happy Pride Month!” McDaniel wrote. “[The Republican Party] is proud to have doubled our LGBTQ support over the last 4 years, and we will continue to grow our big tent by supporting measures that promote fairness and balance protections for LGBTQ Americans and those with deeply held religious beliefs.”

Happy #PrideMonth!@GOP is proud to have doubled our LGBTQ support over the last 4 years, and we will continue to grow our big tent by supporting measures that promote fairness and balance protections for LGBTQ Americans and those with deeply held religious beliefs.

McDaniel’s tweet won the approval of homosexual GOP group Log Cabin Republicans, but many conservatives had the opposite reaction. At the same time, most of the liberal respondents made clear they would never accept the GOP as LGBT-friendly unless and until Republicans fully abandon their opposition to same-sex “marriage” and support for conscience rights and women’s athletics.

Proud to be a partner with you, the @gop and to support small government, individual responsibility, personal freedom and a strong national defense! #InclusionWins https://t.co/2LD6kOEDiu

Sounds good in a tweet, but the reality is religious freedom is being endangered by those demanding forced acceptance of the LGBTQ agenda from the elementary classroom to the corporate board room and everything in between. There can be no compromise on our First Freedom. https://t.co/fVFfSf73rg

So you are a Romney after all. https://t.co/T04xvpbF8V

Stop. We don't want men to play on girls' sports teams and castration of children. Ronna needs to adjust this horrible wrong-headed messaging or resign. https://t.co/FbHhdZP3jB

The incident brings to the foreground long-simmering divisions between the Republican Party’s national leaders and the grassroots voters that sustain it, as well as conservatives versus more libertarian members who prioritize the “big tent” mentality over taking a stand on social issues.

Florida Republican Governor and potential presidential candidate Ron DeSantis rebuked arguments for compromising on cultural battles in an interview with The Federalist published Wednesday. “You can have a successful economy, but if the underpinnings of the culture are being torn apart, I don’t think that’s a society that will be very successful over the long term,” he said.

“I don’t think there’s ever been as many hostile cultural forces, whether it’s corporate media, universities, big tech, now big business,” DeSantis argued. “If you’re an American who believes in the core values of this country — faith, family, opportunity — you are absolutely on the defensive in many respects, so the question is, how do you fight back effectively.”

He also argued that the establishmentarian approach was politically foolish in addition to being wrong on principle. “If you lead and particularly if you’re willing to take some arrows along the way, there are voters that will do whatever they can to make sure they have your back,” DeSantis noted. “Stop trying to grovel in front of [corporate media outlets], stop thinking that they’re going to like you.”

The niece of 2012 GOP presidential nominee and current establishment-affiliated Utah Sen. Mitt Romney, McDaniel was selected by former President Donald Trump in December 2016 to take over as head of the RNC. Trump, whose own record is mixed on LGBT issues, reaffirmed his support of McDaniel for another term last November.