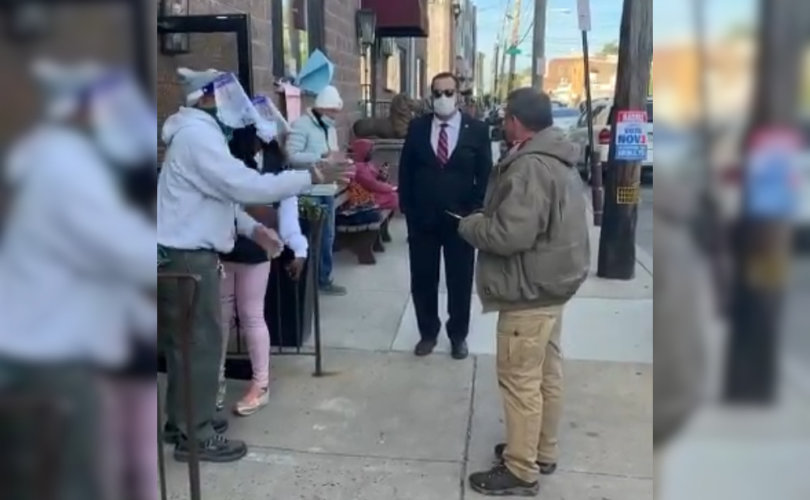 A poll watcher is barred from entering a polling location in Philadelphia, PAWill Chamberlain / Twitter

PHILADELPHIA, November 3, 2020 (LifeSiteNews) — More reports are emerging with claims of voter interference in Pennsylvania, a battleground state crucial for the outcome of the presidential election.

The Election Board of Pennsylvania’s Erie County published a statement this evening about an investigation into the possible destruction of votes for Trump. An Instagram user who claimed to have “been working at the poll station in Erie County, PA all morning” said that he had “thrown away over a hundred ballots for trump already!!!”

Erie County determined that “the person making the statements does not work in any way with Erie County or have any part of Erie County’s election process” and probably isn’t an Erie resident. Nevertheless, Twitter has banned all retweets of the notice, in yet another act of political censorship by the left-wing social media platform.

Earlier today, Mike Roman, director of the Trump campaign’s Election Day Operations (EDO), tweeted that Democratic officials in Philadelphia were “keeping our poll watchers so far from the counting tables there’s NO WAY to ACTUALLY observe. What are they hiding??”

MORE Bad things happening in Philly. Dem election officials have avoided transparency & accountability at every step. NOW they’re keeping our poll watchers so far from the counting tables there’s NO WAY to ACTUALLY observe. What are they hiding?? THIS MUST STOP!!! pic.twitter.com/r1YlkZokAa

The Republican Party of Philadelphia, PhillyGOP, alleged that poll watchers were forced to leave a voting station at a Philadelphia recreation center. PhillyGOP stated that “Biden pamphlets are being handed out at the door!”

Poll watchers serve to protect against voting process violations and unruly behavior at polling places. They have to be registered voters and can belong to any party. The Trump campaign says that they have mobilized over 50,000 confirmed poll watchers.

PhillyGOP also tweeted that “The liberal-backed Election Protection Coalition, who aren't certified poll watchers, are breaking the law by entering the voting room and interfering with votes.”

They reported that poll watchers were denied access to voting sites in Bucks and Montgomery Counties, among other areas. Bucks County was closely contested in 2016, going for Hillary Clinton by less than one percentage point. A photo posted on Twitter this morning showed a sign next to the entrance of a Bucks County polling site with the names of Republican candidates blurred out.

Another Twitter user tweeted a video of a Democratic committeewoman from North Philadelphia halting the entry of poll watchers. She said that watchers’ legal access to voting stations was “a rule that ain’t worth being followed.”

Oh look! A Democratic committeewoman in north Philly wearing a Biden mask not letting certified Republican poll watchers into a polling place… She ends with “that rule ain't worth being followed” when someone says they should be allowed inside. pic.twitter.com/7646fTi2in

Twitter users also continue to find instances of Democratic electioneering at voting sites. Mike Roman tweeted a picture of a sign promoting Democratic Party candidates taped next to the door of a Philadelphia public school with a polling station inside. The Election Task Force of the Philadelphia District Attorney’s Office claimed to have “investigated” the sign and found it “legal,” because it was at least ten feet from the actual room used to cast votes.

Other incidences of pro-Democrat signs were found outside of polling stations in Pittsburgh and Philadelphia. At least one such sign was already removed by Philadelphia citizens.

Two hours ago, a voter in Scranton tweeted a video of polling place with allegedly broken ballot machines. An official can be heard telling voters to “put your vote in the emergency slot and it will be scanned once the machine is unjammed.”

BREAKING: Elections workers are now claiming voter machines are down in Scranton, Pennsylvania.

Worker says voters can fill out a ballot and they will scan it later when the machines are back up ��#Election2020 pic.twitter.com/p9xgsSukfI

Similar issues have been reported in Philadelphia and Westmoreland County.

REPORT: Voting machines down in Westmoreland and Philadelphia Counties. Opposite sides of the state, both pro-Trump strongholds. #PAForTrump

Josh Shapiro, attorney general of Pennsylvania, stoked fears of ballot interference over the weekend when he announced that “if all the votes are added up in PA, Trump is going to lose.”

If all the votes are added up in PA, Trump is going to lose. That’s why he’s working overtime to subtract as many votes as possible from this process.

For the record, he’s 0-6 against us in court. We’ve protected voting rights. Now, ignore the noise—vote!https://t.co/mN8t6TDud7

PHILADELPHIA, Pennsylvania, November 3, 2020 (LifeSiteNews) — Concerns about election fraud have been heightened by allegations that poll watchers are being denied access to polling stations in Philadelphia.

According to Mike Roman, the Trump campaign’s Election Day Operations (EDO) Director, “the steal is on” as polling stations prevent official Republican poll watchers from coming inside.

“Democrat election officials banning Trump poll watchers in Philly,” Roman tweeted over footage of a card-carrying poll watcher being refused entry. “This is happening all over the City. The steal is on!”

��DEMOCRAT ELECTION OFFICIALS BANNING TRUMP POLL WATCHERS IN PHILLY. This is happening all over the City. The steal is on! https://t.co/sWS9lXL5vh

The video shows how poll workers are prohibiting a man, whose “Watcher’s Certificate” allows him to be a poll watcher anywhere in Philadelphia, from entering the polling location.

The role of the poll watcher is to maintain a quiet presence in a polling station to deter fights and violations of the voting process. They must be on the electoral roll, and they can belong to any party. They are supposed to protect voters from manipulation and intimidation.

Roman, who was a senior advisor to the Trump campaign in 2016, also posted a photograph he said showed two people in a Philadelphia polling booth and a photograph of a man apparently handing out Democratic campaign material inside a polling station.

“Illegal campaigning inside of a polling location in Philly,” he wrote. “Man in blue is handing out Dem literature to voters in line to vote. This is why Dems are keeping Trump watchers out. They are stealing [the election]! This needs to stop!”

ILLEGAL campaigning INSIDE of a polling location in Philly. Man in blue is handing out DEM literature to voters IN LINE TO VOTE. This is why DEMS are keeping TRUMP WATCHERS OUT. They are STEALING it! This needs to STOP! pic.twitter.com/qnJ3D8o2ie

The Philadelphia Republican Party also tweeted out photographs and stories about alleged violations of the electoral process by Democrats.

“[Councilmember Kenyatta Johnson], what’s going on in your district?”