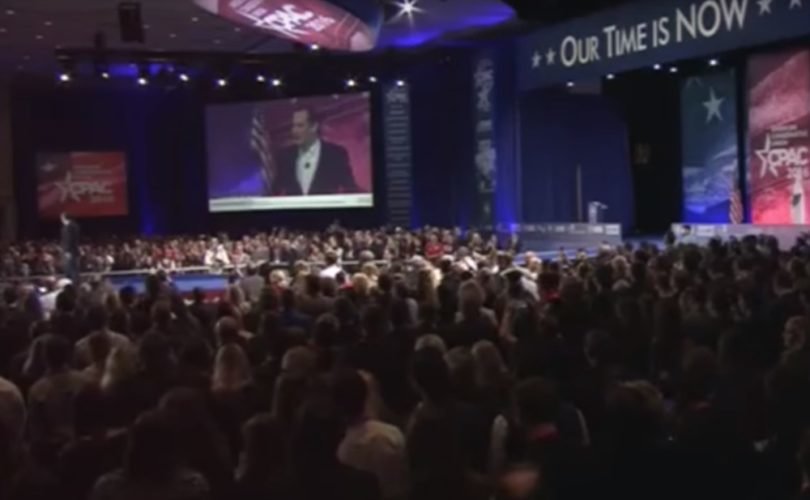 In order of appearance, Ohio Governor John Kasich, Texas Senator Ted Cruz, neurologist Ben Carson, and Florida Senator Marco Rubio all addressed faith and family in their speeches to the enormous crowd of mostly young attendees. Carson announced the suspension of his presidential campaign on the main stage, while Donald Trump's campaign said he would focus on campaigning in Kansas.

“You should all know,” Kasich told attendees, “that you are all made special. No one has ever been made like you. And no one ever will. See, I believe the Lord makes us special for a special purpose.”

Pointing out a woman in the crowd, Kasich repeated that she “has been made special for a special purpose, and you have gifts that no one has. No one is quite like you, because you are made special, and your job is to find those gifts, and to live a life bigger than yourself, and change the world in which you live.”

Several hours later, Cruz used soaring rhetoric about repealing the Affordable Care Act, enacting tax reform and balancing the budget, and immigration. He also heavily criticized Trump on several occasions and focused many of his remarks on how to defeat ISIS and Muslim extremism.

As with Kasich, his comments on faith and family issues were brief.

In a criticism of Trump, Cruz vowed to attendees that “I will not compromise away your religious liberty” by compromising “with Democrats” on Supreme Court justices.

Carson's expected announcement that he would suspend his campaign was the last speech by a presidential candidate on Friday. Carson said he had accepted the position of national chairman for My Faith Votes, a group dedicated to getting Christian voters to the polls.

Carson spoke at length about his faith in both his speech and a follow-up Q&A with Fox News contributor Mercedes Schlapp. He said policies should empower families, calling “faith and family” America's “pillars of strength.”

“Nothing is more important to me than my personal faith, and it is my faith that motivated me to be involved in the political process to begin with,” Carson said in a video statement posted on the My Faith Votes website.

“I believe Christians in this country can easily determine the next president of the United States and all other national and local leaders, should they simply show up at the polls,” he said.

Rubio said a better future for America includes “re-embracing and following the First Amendment. What that stands for is not just the right to believe anything you want, but the right to live out the teachings of your faith in every single aspect of your life.”

Later, Rubio stated that “conservatives believe in traditional values – not because we want to impose our beliefs on anyone, but because to abandon our values would be to ignore our history. Americans are not the most generous people on Earth because our laws make us generous. People do not donate to charity in this country in record amounts because we have a tax break from it. We do so because this nation has been changed by Judeo-Christian principles that teach us we have an obligation to care for one another. We believe in traditional values because, without them, without a belief in an all-powerful God, the very founding of this country is meaningless. … If there is no God, then where do your rights come from, other than what your leaders decide they are?”

Rubio addressed abortion several times during his speech and the following Q&A with CNN's Dana Bash. He told Bash that “my faith influences me to believe that all human life … is worthy of the protection of our laws.”

Trump had been expected to speak at CPAC at 8:30 Saturday morning. However, his campaign said he would prioritize campaigning in Kansas before the state's caucus on Saturday.

Cruz ended up winning the caucus, with nearly half of caucus-goers backing him. Trump placed a distant second.