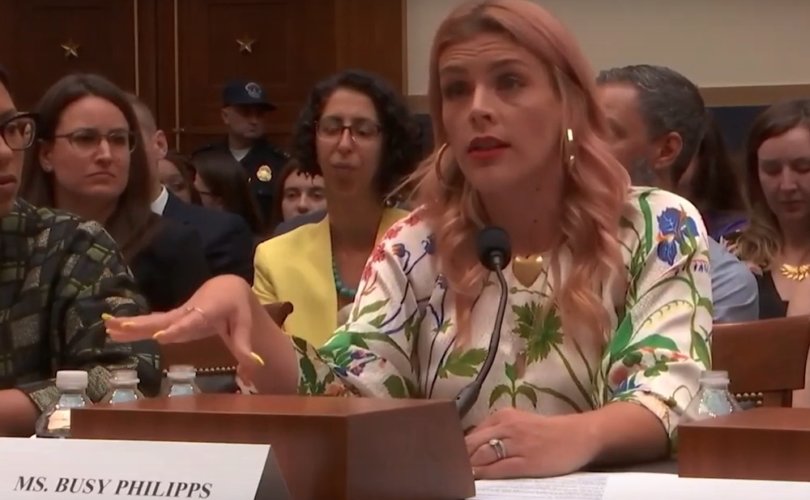 Busy Phillips, an actress and author who had an abortion as a teenager, testified before the U.S. House Judiciary Committee to complain that, had she aborted in her native Arizona today, she would have had to obtain parental consent, wait 24 hours, undergo informed-consent counseling, and, most offensively, “give the state a reason why.”

“Well, here is mine: my body belongs to me, not the state,” she declared. “Women and their doctors are in the best position to make informed decisions about what is best for them. No one else.” Phillips falsely claimed that criminalizing abortion won’t “stop anyone” from committing one, and is only about “shaming and controlling women’s bodies.” She asserted that she has the right to abort other human beings because “I am a human being that deserves autonomy in this country that calls itself free.”

The lawmakers also heard testimony from pro-life activist Melissa Ohden, who survived a botched saline abortion. “How do you reconcile my rights as a woman who survived a failed abortion with what’s being discussed here today?” she asked. “There’s something wrong when one person’s right results in another person’s death. There’s something deeply disturbing about the reality in our world that I have a right to an abortion but I never had the simple right to live.”

Gohmert referred back to Ohden’s testimony when questioning Phillips, asking her if “somebody who has survived an abortion like Melissa Ohden has a right when she’s born to life, to control her body when someone else doesn’t take her life.” Phillips responded by “thank[ing] her for sharing her story,” while dodging the question entirely by quipping that “although I played a doctor on television, sir, I am actually not a physician.”

“No, but you’ve given very compelling testimony, and I appreciate you’ve obviously given these issues a lot of thought,” Gohmert replied.

Phillips tried to deflect again with the standard pro-abortion refrain that “I don’t believe that a politician’s place is to decide what’s best for a woman and, you know, it’s a choice between a woman and her doctor,” and claiming she “can’t speak to [Ohden’s] experience because I was not there.”

“Well I just wondered how far your feeling about that went, because once she’s born, would you agree that she is a person in being?” Gohmert asked.

Democrats took control of the U.S. House of Representatives last fall, and since January have moved 50 times to block a vote on legislation guaranteeing basic medical care to newborns who survive attempted abortions.