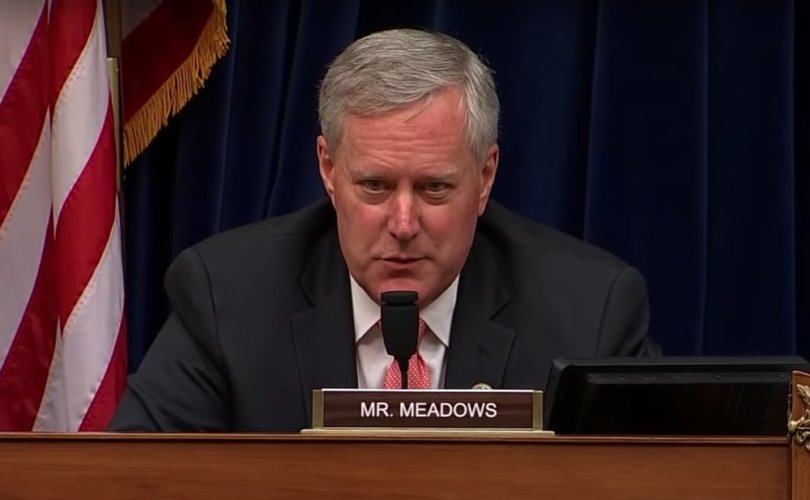 WASHINGTON, D.C., May 28, 2019 (LifeSiteNews) — Rep. Mark Meadows of North Carolina, one of several conservative Republicans who found themselves “shadow-banned” on Twitter last summer, grilled the social media platform last week on its handling of the matter and warned that it is only a matter of time before Congress imposes a solution on internet giants.

Last week, the House Oversight and Reform Committee held a hearing on election integrity and online political discourse, during which Meadows and others questioned a number of witnesses, including Twitter public policy manager Kevin Kane.

Kane testified about the company’s efforts to combat fraudulent activity as well as election interference from foreign governments. But Meadows was more concerned about Twitter’s treatment of users suppressed without violating the company’s rules, such as the shadow-banning incident.

Last July, Vice News revealed that Twitter had been hiding the accounts of several prominent Republicans from auto-filling in its drop-down menu, including Meadows, Republican National Committee chair Ronna McDaniel, Donald Trump Jr. spokesman Andrew Surabian, and other congressional Republicans. None of the victims’ Democrat counterparts was similarly affected.

Twitter denied any political intent and fixed the issue within a day of the report, but conservatives were unimpressed by the company’s explanation, which blamed the incident on how its system identifies “bad-faith actors who intend to manipulate or detract from healthy conversation” in part by whether other accounts mute, follow, block, or retweet an offending account.

“Listen, what you’re finding is the Wild Wild West, and I’m all for the Wild Wild West in freedom,” Meadows said during his questioning. “But the minute you start putting your hand on the scale of freedom and justice to tilt it one way or another, quite frankly, we’ve gotta act as members of Congress.”

Meadows pressed Kane on exactly how long the affected Republicans were shadow-banned, noting that “if you’ve got all these wonderful analytics that are gonna find Russians, you can figure out how the auto-populate for four members of Congress took place.” Kane pledged that his team would work to provide Meadows’s office with a “complete answer.”

“The problem that I have with this is, the chairman’s talking about shadow-banning, and you say that you don’t do it,” Meadows continued. “We don’t know what you do and what you don’t do. Because, quite frankly, it took Vice News, which is normally no friend to conservatives, to actually report on this. And that’s when we found out about it, that’s when you say you found out about it.

“Are you aware of any current Twitter employees or previous Twitter employees who have shared information with the public on how to affect the Twitter followers and engagement of people that are on Twitter?” he asked. Kane answered that he was not.

From there, Meadows turned to grill Facebook cybersecurity policy head Nathaniel Gleicher on the takedown of a pro-life campaign ad by Republican Sen. Marsha Blackburn of Tennessee. After some confusion, it was eventually clarified that Twitter, not Facebook, had been the offender in that incident, though Facebook had also blocked different pro-life ads supporting Blackburn.

“Let me just tell you: the days of freelancing on this, and having somebody stick their finger up and figure out whether they’re going to take them? They’re over,” Meadows warned. “I’m here to tell you. And even if it takes extreme measures, you have now collided with a bipartisan issue for different reasons, and we’ll make sure that we do that.

A growing number of conservatives are calling for government intervention of some kind to address political discrimination on major speech platforms, while others worry that such intervention would run afoul of tech companies’ own speech and property rights. Republican Sen. Ted Cruz of Texas suggested that the federal government could balance both considerations by threatening to revoke the special liability protections Facebook and Twitter enjoy that are predicated on being truly neutral forums rather than publishers with editorial biases, applying existing antitrust laws to break up companies like Google, or exploring whether biased enforcement of what most users assume to be neutral and open forums constitutes fraud.

Earlier this month, the White House launched an online form for those who “suspect political bias caused such an action to be taken against you” to share their stories with President Donald Trump. It’s not clear whether any future action will be linked to the portal beyond the president using his formidable media reach to publicize such incidents.