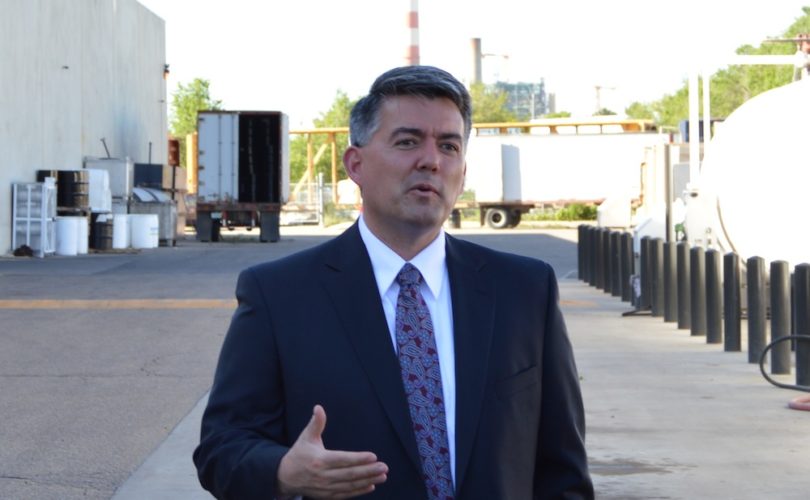 U.S. Rep. Cory Gardner was criticized in March for removing his support for a personhood amendment to the Colorado Constitution.CoryGardnerforSenate.com

DENVER, CO — The Republican nominee for the U.S. Senate in Colorado is formally backing over-the-counter access for oral contraceptives after being attacked by his opponent.

Second-term U.S. Rep. Cory Gardner, who in March was criticized for reversing his previous support for a personhood amendment to the Colorado Constitution, wrote an op-ed in the Denver Post on Thursday promoting over-the-counter access to “the pill.” According to Gardner, oral contraception “is safe, reliable, effective, and presents very few risks or complications for the more than 10 million women who use it.”

Gardner identifies as pro-life; however, his position on abortion is difficult to pin down. The Republican told the Denver Post earlier this year that Udall’s claim he opposes abortion even in the cases of rape and incest is among “lies” the Democrat has spread about his views.

Gardner signed onto legislation in 2007 that included a ‘life of the mother’ exception for abortion once all other methods of trying to save the life of both mother and child were exhausted. Despite his disavowal of Colorado’s personhood amendment, Gardner remains a cosponsor of the federal “Life at Conception Act,” which declares that human life begins at fertilization.

Gardner wrote the op-ed after Planned Parenthood and incumbent Senator Mark Udall, R-CO claimed he opposed birth control. Udall's ad said that Gardner “led a crusade that would make birth control illegal,” a reference to Gardner's prior support for personhood amendments to the Colorado and U.S. constitutions. However, personhood supporters differentiate between contraceptives — which prevent fertilization — and abortifacients — which kill unborn children.

Gardner's campaign and Hill offices did not return requests for comment about Gardner's birth control position, and questions on the effectiveness and safety of contraceptives.

Pro-life critics note that contraceptives can cause harm that women are often unaware of. In reference to Comstock's letter to Sebelius, Dr. Angela Lanfranchi, president of the Breast Cancer Prevention Institute, told LifeSiteNews that “making these drugs over-the-counter would only increase women's risk of cancer, heart attacks, stroke, and lethal infections.”

“The pill is responsible for a significant percentage of pre-menopausal breast cancer, [and] women have the right to know that oral contraceptives are Group 1 carcinogens for breast, cervical, and liver cancer,” she said. “Group 1 is the same group that lists cigarettes causing lung cancer, and asbestos, causing mesothelioma.”

Gardner's support for oral contraceptives may also undercut his pro-life campaign. American Life League Vice President Jim Sedlak told LifeSiteNews that “the birth control pill, the morning-after pill, and Plan B all have the same chemical make-up. They all work by preventing ovulation, preventing fertilization, and preventing implantation.”

“Not requiring prescriptions will result in more women taking the pill, and more women will die, and more human beings will die in the womb as a result,” he said.

The Senate race between Gardner and Udall is close, with polling showing Udall with a slight lead. Colorado is consistently considered a “purple” state in national politics.