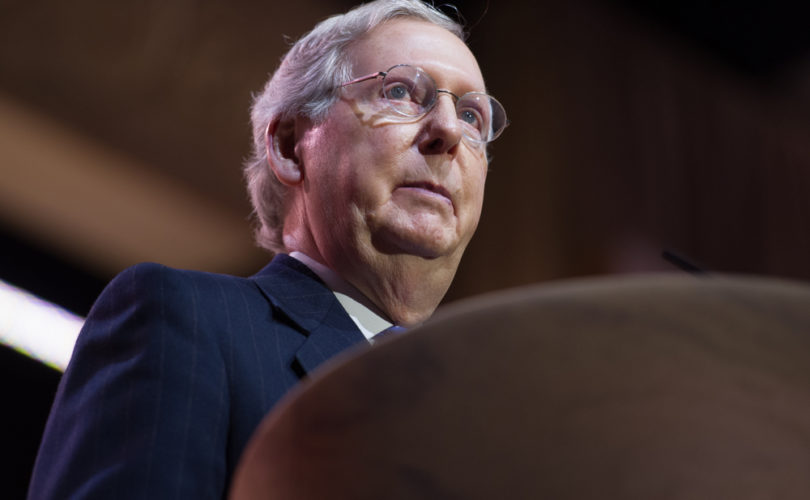 However, one freshman Republican who is on the requisite committee for any nominees is softening his tone, in what could be just the first of many Republicans who fear looking reactionarily opposed to Obama nominees.

After the Supreme Court justice died unexpectedly on Saturday, Obama said it was his “plan to fulfill my constitutional responsibilities to nominate a successor in due time. There will be plenty of time for me to do so, and for the Senate to fulfill its responsibility to give that person a fair hearing and a timely vote.”

“These are responsibilities that I take seriously, as should everyone,” continued Obama. “They're bigger than any one party. They are about our democracy. They're about the institution to which Justice Scalia dedicated his professional life, and making sure it continues to function as the beacon of justice that our Founders envisioned.”

However, McConnell seemed to quash any hope of Obama putting a third justice on the Court. “The American people‎ should have a voice in the selection of their next Supreme Court Justice,” he said. “Therefore, this vacancy should not be filled until we have a new President.”

While many GOP senators are falling into line behind McConnell, including the chairman of the Senate Judiciary Committee, through which any nominees must pass, North Carolina Senator Thom Tillis said that an ideological twin to Scalia being put on the Court is “unlikely to happen” and that “I think we fall into the trap if we just simply say sight unseen – we fall into the trap of being obstructionist.”

“All we're trying to say is that based on this president's action, it is highly unlikely,” Tillis told The Tyler Cralle show, according to POLITICO. “And if [Obama] puts forth someone that we think is in the mold of President Obama's vision for America, then we'll use every device available to block that nomination, wait for the American people to voice their vote in November and then move forward with a nomination after the election and most likely with the next president.”

Tillis's words are somewhat more conciliatory than those he released a few days ago. In a prior statement, the Judiciary Committee member said, “We are in midst of a great debate about the future of our country, including the future make-up of the highest court in the land, which makes decisions that affect the lives of all Americans.”

“It is highly likely that the President will nominate someone who shares his views and will rubber-stamp his unilateral actions, which run counter to the original intent of our Constitution,” said Tillis in his original statement. “This is why it is incumbent upon the Senate to assert its co-equal authority in the constitutionally prescribed process of determining the make-up of the highest court. I firmly believe the voice of the American people should be heavily weighted in that decision and their voice will soon be heard on Election Day. Given the current circumstances, the process of filling the Supreme Court vacancy would be best left to the next President.”

Most Republicans have been happy to stand with McConnell.

“The fact of the matter is that it's been standard practice over the last nearly 80 years that Supreme Court nominees are not nominated and confirmed during a presidential election year,” said Senate Judiciary Committee chairman Chuck Grassley, R-IA, whose committee must approve any nominees. “Given the huge divide in the country, and the fact that this President, above all others, has made no bones about his goal to use the courts to circumvent Congress and push through his own agenda, it only makes sense that we defer to the American people who will elect a new president to select the next Supreme Court Justice.”

Many GOP members of the Judiciary Committee have backed Grassley and McConnell, with even moderate South Carolina Senator Lindsey Graham telling ABC that while he backed Kagan and Sotomayor, polices and politics by Obama and Senate Democrats make the odds of an Obama nominee getting through the Senate “very small.”

Committee member and Louisiana senator David Vitter said, “Filling this vacancy is so important, so critical on so many issues. I think we should leave it up to voters, rather than getting into some insider tug of war.”

Campaign vulnerability also hasn't stopped Senate Republicans who are under heavy targeting from Democrats from backing McConnell. Rob Portman of Ohio said this week, “With the election less than nine months away, I believe the best thing for the country is to trust the American people to weigh in on who should make a lifetime appointment that could reshape the Supreme Court for generations.” New Hampshire Senator Kelly Ayotte said, “We're in the midst of a consequential presidential election year, and Americans deserve an opportunity to weigh in given the significant implications this nomination could have for the Supreme Court and our country for decades to come. I believe the Senate should not move forward with the confirmation process until the American people have spoken by electing a new president.”

Senator Ron Johnson of Wisconsin has likewise stood with McConnell and Grassley.

On the presidential campaign trail, Senators Ted Cruz of Texas and Marco Rubio of Florida have said they want a new president to nominate Scalia's successor in 2017. Cruz serves on the Senate Judiciary Committee.

The statements have set up what will likely be a huge policy and campaign fight as the November elections near, as well as the normal inter-party rancor. Think Progress is accusing Grassley of hypocrisy, since he voted to put Justice Anthony Kennedy on the bench in 1988 and in 2008 accused Democrats of “unjustified slowness” in approving President George Bush's nominees.

Newsbusters and conservative commentators, meanwhile, have jumped on Senator Chuck Schumer, D-NY, who in 2007 urged Democrats to block President Bush's nominees because he thought the Court was too far to the right.

Schumer has been one of many Democrats accusing Republicans of dirty politics and acting against the best interest of the nation for intending to block any Obama nominee.

Democrats say Republicans must back an Obama nominee, without which the Supreme Court will be without a ninth justice for nearly a year, with odds high that the vacancy will last more than a year. However, Republicans say they do not want Obama to be able to put a third liberal on the court, thus creating a liberal bent for possibly decades.