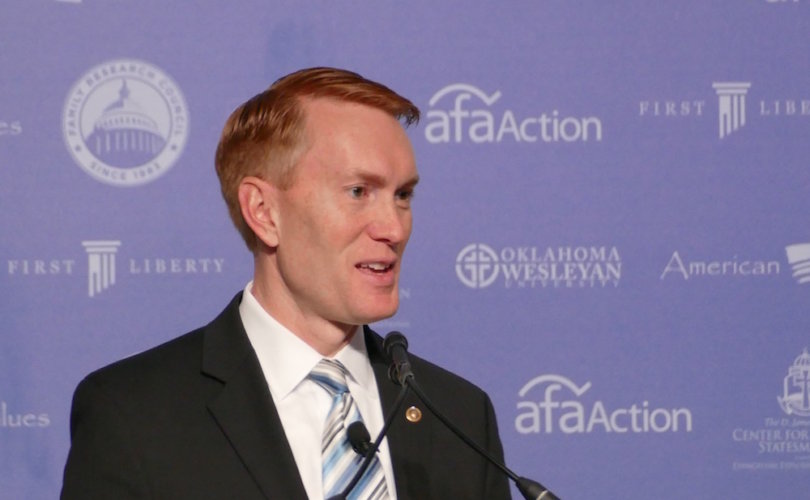 WASHINGTON. D.C. (LifeSiteNews) – Sen. James Lankford (R-OK) announced Wednesday he will “absolutely oppose” the so-called Respect for Marriage Act, arguing it would be used as a “weapon” against Americans who uphold traditional marriage.

Lankford, the latest Republican to come out against the pro-gay “marriage” legislation, explained his opposition to the bill during a Family Research Council podcast, “Washington Watch with Tony Perkins.”

“I believe marriage is between a man and a woman,” said Lankford. “That’s not just a biblical concept and a worldview concept, but that’s a historic concept, as well.”

Lankford argued that the legislation would threaten the tax-exempt status of groups who reject homosexual “marriage,” and that they “will immediately become a target of this federal government.”

The senator warned that liberals “are no longer saying, ‘We demand recognition’ of same-sex marriage. Now they’re saying, ‘We’re going to crush anyone that opposes our belief in gay marriage.’”

“They want to take it the next step and then use” the bill “as a weapon [against] others” once it passes, Lankford added.

The so-called “Respect for Marriage Act” would codify same-sex “marriage” in federal law. It repeals the longstanding but unenforced Defense of Marriage Act, which recognized marriage as a man-woman union in federal law; federally recognizes any “marriage” lawfully performed by any state; and force every state to recognize the “marriages” of every other state.

A group of over eighty religious conservative organizations sent a letter to Senate Minority Leader Mitch McConnell urging him to reject the bill, arguing that it could lead to predatory lawsuits against Christian business owners who refuse to facilitate same-sex “weddings” and ceremonies, as well as religiously affiliated foster services, social services, and government contractors for refusing to acknowledge same-sex “marriage.”

​​The letter, led by the Alliance Defending Freedom and cosigned by CatholicVote, Liberty Counsel, the Heritage Foundation, and others, also warns the bill would threaten the tax-exempt status of religious organizations for defending the traditional definition of marriage.

The House voted to pass HR 8404, with 47 House Republicans joining every Democrat in the measure as Republican leadership in the House did nothing to try to stop the law. The bill is currently up for a vote in the Senate and has the support of five Republican senators, including Ron Johnson of Wisconsin.