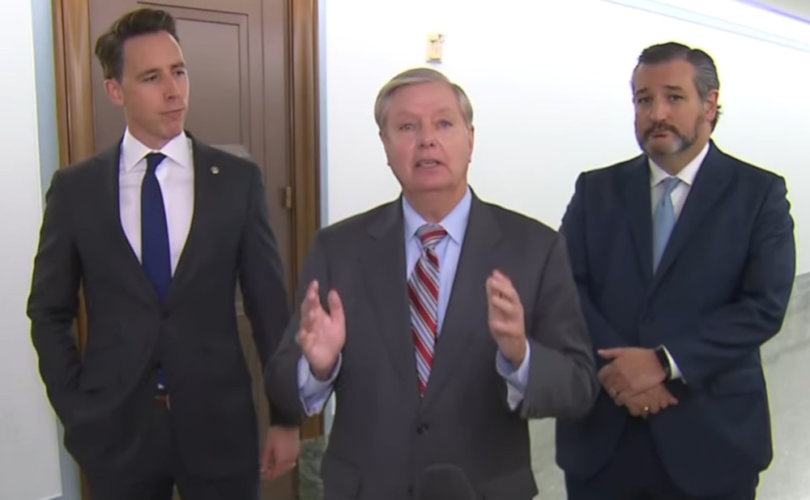 WASHINGTON, D.C., October 15, 2020 (LifeSiteNews) — Republican members of the Senate Judiciary Committee have announced their intent to subpoena Twitter CEO Jack Dorsey and possibly Facebook CEO Mark Zuckerberg so they can explain why bombshell reports of corruption among the Biden family published by the New York Post are being censored on their platforms.

After spending the morning at confirmation hearings for Judge Amy Coney Barrett, Senators Lindsey Graham, Ted Cruz, and Josh Hawley told reporters that they believe Big Tech is “interfering” in the US election by blocking the stories, which purport to show that members of Joe Biden’s family were engaged in shady dealings in Ukraine and China.

The blocking of the stories caused massive outrage on social media. Hundreds of conservative and Republican activists and lawmakers accused Twitter of blatant censorship and even making an “in-kind donation” to the Biden campaign. LifeSite’s account was also barred from sharing the reports.

Some mainstream media figures defended the move, arguing the reports are simply part of a “Russian disinformation” campaign and that Twitter and Facebook were right to ban them.

Senator Hawley, a first-term Senator from Missouri who is seen as a possible presidential candidate in 2024, characterized the decision to block the stories as an “attempt to rig an election … by monopolies.”

“Twitter and Facebook … are both engaged in censorship,” he added. “They should answer to the American people.”

This is an “attempt to rig an election by monopolies.” pic.twitter.com/PQJErYPLsx

Senator Cruz said Twitter and Facebook are “actively interfering in this election in a way that has no precedent in the history of our country.”

Today, the official Twitter account of President Donald Trump’s reelection campaign was locked after attempting to share a New York Post article on Biden and allegations of corruption. Previously, White House Press Secretary Kayleigh McEnany had been locked out of her account for the same reason.

LifeSite has been covering censorship of pro-life, pro-family, and conservative voices on social media for months. Our original series, Uncensored: Big Tech vs. Free Speech, provides multiple examples of Twitter, Facebook, and others spying, manipulating, and censoring users. Click here to learn more.