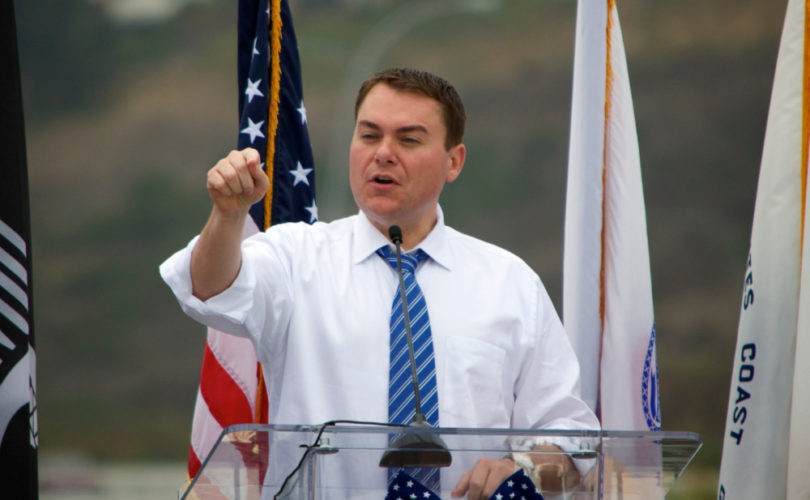 Carl DeMaio, one of the GOP's two homosexual candidates for Congress in the November 4 midterm electionshttp://carldemaio.com

After five days of ballot counting, it’s official – neither of the two openly homosexual Republican candidates for U.S. House won their races last Tuesday. They lost despite strong public backing from Speaker of the House John Boehner, R-OH, and other high-profile GOP leaders, who aggressively promoted the two men as part of their “Young Guns” recruitment program after concluding in a post-2012 election report that the party’s position against same-sex “marriage” was hurting them with millennial voters.

Previously, Tisei had boycotted the state GOP convention because of its position against same-sex “marriage.”

“I don’t want to go and be seen in any way to be endorsing that,” said Tisei, who “married” his boyfriend Bernie Starr last year. “I don’t really feel comfortable being at a convention where the platform takes the party backward, rather than forward, as far as appealing to a large group of Massachusetts voters.”

Conservative groups decried the party brass’ support for Tisei and California congressional candidate Carl DeMaio, writing a joint letter to Boehner and the GOP leadership urging them to cut off funding to candidates who reject the party platform.

“Carl DeMaio [and] Richard Tisei … are antithetical to the Republican platform,” the pro-family groups wrote in a letter sent to Boehner, National Republican Congressional Committee chairman Greg Walden, and Senate Minority Leader Mitch McConnell. “Mr. DeMaio supports and aggressively advocates for the redefinition of marriage, and welcomed the judicial activism of the federal courts which stripped the people of California of their votes in support of maintaining marriage as the union of one man and one woman.”

Nonetheless, Boehner, who also claims to oppose gay “marriage,” used his fundraising committees to donate the maximum amount possible to both Tisei’s and DeMaio’s campaigns, and hit the campaign trail for both men in the weeks leading up to the election.

DeMaio’s race, in particular, drew national attention due to its competitiveness, and the fact that if elected, DeMaio would have been the first openly gay Republican to win a seat as a freshman.  A total of $10 million was spent on the campaign by both sides, including $14,000 from Boehner’s war chest.

Ultimately, it was all for naught – DeMaio, a former San Diego city councilman, finally conceded Sunday after losing his narrow early lead over Democratic incumbent Scott Peters.  With 6,000 to 8,000 votes left to count, Peters’ lead had grown to nearly 4,800 votes, leading DeMaio to tell the U-T San Diego newspaper, “It is increasingly clear we will fall short when the final votes are tabulated.  Because I care about San Diego, I wish Mr. Peters the best and hope he will endeavor to represent the district well.”

DeMaio’s campaign had been tarnished by accusations from two male campaign employees who resigned alleging sexual harassment by the candidate.  Last month, former policy director Todd Bosnich, who is also gay, told CNN that DeMaio had fondled himself in his presence and on one occasion, grabbed Bosnich’s genitals during a car trip back from a staff event.

A second ex-staffer, former regional political director Justin Harper, came forward just days before the election to share his own story of harassment by DeMaio, in which the candidate allegedly intentionally exposed himself in the men’s restroom.

“Carl was a hero of mine,” a disillusioned Harper told KPBS News. “I thought he could possibly change the Republican Party, and now I don't know if it's just a big political game to him.  I really don't know what to think except that I had the same thing that (Bosnich) had.”  Harper, 25, said he has since dropped out of school and moved out of state to avoid the publicity stemming from the incident.

DeMaio has repeatedly refused the allegations, but former colleagues at San Diego City Hall said DeMaio has a reputation for inappropriate sexual behavior in the workplace.

The week before the election, the National Organization for Marriage (NOM) sent out a mass email begging its supporters in the 6th district to vote for Scott Peters.

“The National Organization for Marriage urges you to refuse to vote for Carl DeMaio.  In fact, we ask you to vote for incumbent Scott Peters, even though Peters is also wrong on the issues,” the conservative group wrote. “The reason for this is that Peters can’t do any damage as a Democrat in a House of Representatives controlled by Republicans, and we can work together to elect a true conservative in two years to replace him. But Carl DeMaio serving as a supposed Republican in a House controlled by Republicans can do great damage, and could end up holding the seat for decades.”

NOM celebrated both DeMaio’s and Tisei’s defeats in a press release Monday.

“I hope that our success in defeating these [pro-homosexual] Republican candidates sends a message to the Republican leadership in Washington that the GOP faithful demands candidates who are committed to defending marriage, which is a critical element of the Republican platform,” said Brian Brown, NOM's president.

“Republicans want to support candidates who stand with them to advance policies that promote liberty, prosperity, national security and the natural family,” added Brown. “Marriage is the most pro-family, pro-child institution ever devised, one that brings men and women together and forms the ideal environment for any children born of their union. When candidates speak out in support of marriage, voters will reward them; when candidates ignore marriage or actually want to redefine it, they are rejected.”