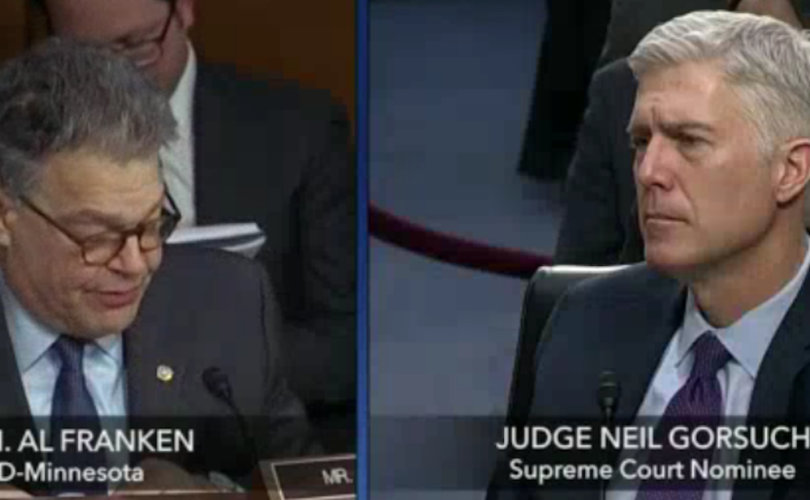 Throughout much of the hearing, Gorsuch discussed a variety of issues that are “precedent” or currently the law without revealing what he thinks of them. He reaffirmed throughout his hearing the right of the people to challenge precedent or current laws.

Franken questioned Gorsuch about his involvement with the Bush campaign in Ohio in 2004, the same year that 11 states passed pro-marriage referenda by popular vote.

These amendments “sent a clear message to gay and lesbian couples that their unions were not equal in the eyes of the law,” said Franken.

“How’d you feel about the right to marry being put to a popular vote?” he asked Gorsuch.

“Senator, I don’t recall any involvement in that issue during that campaign,” said Gorsuch.

“Were you aware of that issue at all?” asked Franken. When Gorsuch said yes, he was aware of it, Franken asked how he felt about it.

“Senator, my personal views – any revelation of my personal views about this matter would indicate to people how I might rule as a judge – mistakenly, but it might,” said Gorsuch. “And I have to be concerned about that.”

Franken brought up Gorsuch's law school roommate, Ken Mehlman, the former chair of the RNC who later “came out” as homosexual.

“These discriminatory amendments were part of the deliberative effort to drive up the turnout. We know that because your friend, Ken Mehlman, said so. Mr. Mehlman was interviewed by The Atlantic in 2010 and said the Bush campaign had “Been working with the Republicans to make sure anti-gay initiatives and referenda would appear on November ballots in 2004 and 2006 to help republicans.' …There is nothing to suggest you were involved in crafting that strategy, but at the time this tactic received a lot of attention, including in Ohio where you worked on the campaign. There was a profound impact on people's lives. But a lot has changed since 2004. Mr. Mehlman announced publicly that he is gay, for one. He also voiced regret about what happened. He apologized. He said, 'at a personal level, I wish I had spoken out against the effort. As I've been involved in the fight for marriage equality, one of the things I've learned is how many people were harmed by the campaigns in which I was involved. I apologize to them and tell them I'm sorry.’ That's a brave thing to say. It’s hard to admit regret. Mr. Mehlman had a personal connection to the issue, to be sure. But our country has come a long way in a relatively short amount of time. A lot of folks have changed their view about marriage equality – Republicans and Democrats alike. In the meantime, [the] Supreme Court has settled this issue. Marriage equality is now the law of the land, so you shouldn't have any problem answering this question. How have your views of marriage equality changed, if at all, since the 2004 election?”

“It is absolutely settled law,” responded Gorsuch. “There’s ongoing litigation about its impact and its application right now and I cannot begin to share my personal views without suggesting mistakenly … “

Franken cut him off to move onto another topic.