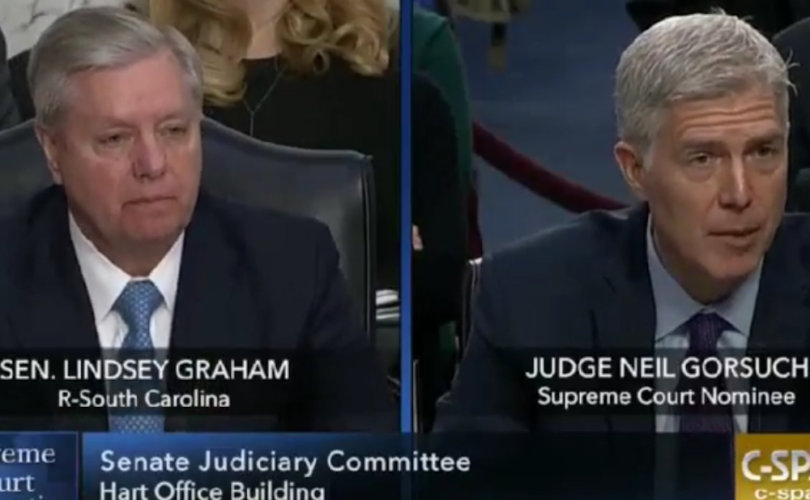 During day two of Gorsuch's confirmation hearing before the Senate Judiciary Committee, Graham took the opportunity to detail why he supports the Pain-Capable Unborn Child Protection Act and the possibility of it going before the Supreme Court as a challenge to Roe v. Wade.

“We’re one of seven nations that allow wholesale, on demand, unlimited abortion at 20 weeks, the fifth month of pregnancy. I’d like to get out of that club,” said Graham. “The standard medically is if you operate [on an] unborn child at 20 weeks the medical protocols are such that you have to apply anesthesia because you don’t wanna hurt the child in the process of trying to save the child. … My theory is, well, let's look at it the other way, should you allow abortion on demand of a child that can feel excruciating pain?”

“I'm just letting everybody know that if this legislation passes, it will be challenged before you and you will have to look at a new theory of how the state can protect the unborn,” said Graham. “And here is what I think. You will read the briefs, look at the facts, and make a decision, am I fair to conclude that?”

“Senator, I can promise you no more than that, and I guarantee no less than that in every single case that comes before me,” responded Gorsuch.

“This is a real world situation that may develop over time because 70-something percent of the American people side with me on the idea that at 20 weeks we should not be in the club of seven nations that allow abortion on demand,” said Graham. “That's in the fifth month and that doesn't make us a better nation. There’ll be people on the other side saying no, that's an erosion of Roe and it will go to the [Supreme] Court, maybe, if it ever passes here.”

“Everybody who wants to challenge whatever in court deserves a person like you,” concluded Graham. “A person like you no matter what pressures are applied to you will say, over and over again, ‘I want to hear what both sides have to say, I want to read their legal arguments, look at the facts and I will decide.’ That to me is reassuring and that's exactly the same answer I got from Sotomayer and Kagan: no more, no less. And we can talk forever about what you may or may not do, if you do anything different than that, I think you would be unworthy of the job.”

Before detailing the Pain-Capable Unborn Child Protection Act, Graham asked Gorsuch if he thinks it is OK for precedent to be challenged. Gorsuch affirmed that people have the right to challenge precedent.