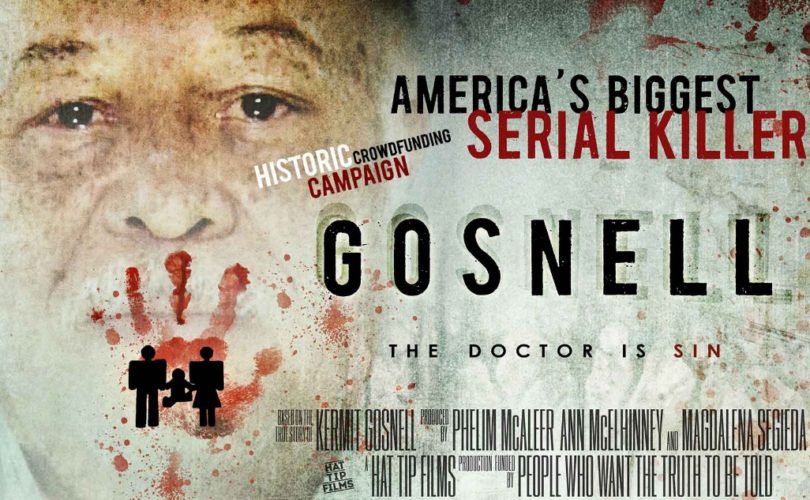 October 15, 2018 (LifeSiteNews) – A biopic about a notorious late-term abortionist was the most successful independent film at the box office last weekend despite a mainstream media blackout.

Opening on the same weekend as moon-landing film First Man and the kids’ movie Goosebumps 2: Haunted Hallowe’en, Gosnell: The Trial of America’s Biggest Serial Killer was the fourth most successful of new films released in the U.S. last weekend and ranked 12th overall at the box office.

Opening in 673 cinemas, Gosnell grossed $1,235,800 over the weekend despite the reluctance of mainstream media, including Hollywood’s Variety magazine, to review the film. Of the heavy-hitters, only the Los Angeles Times and Forbes bothered to review Gosnell. (The LA Times panned the film; Forbes granted it cautious praise.)

The film’s producers, investigative reporters Phelim McAleer and Ann McElhinney, stated that the blackout was not surprising as the media also refused to cover Gosnell's trial until shamed into action by a massive social media/citizen journalist campaign.

In May 2013, Philadelphia abortionist Kermit Gosnell was found guilty of murdering three infants born alive during abortion procedures. His trial attracted huge controversy amid allegations that mainstream media outlets ignored it because they did not wish to bring negative attention to abortion.

Gosnell’s filthy, blood-splattered abortion facility went uninspected for 17 years. He kept the feet of aborted babies in jars, allowed non-medical staff to administer medication, and killed babies born alive by “snipping” their spinal cords with scissors. He was also found guilty of the involuntary manslaughter of Karnamaya Mongar, who had come to him for an abortion.

“At the time many in the media apologized for failing to cover the Gosnell trial and promised to do better but here they are refusing to review a film about the case that is available nationally and has attracted huge social media buzz,” said McElhinney in a press release.

Husband-and-wife team McAleer and McElhinney wrote a best-selling book about the trial. Gosnell: The Untold Story of America’s Most Prolific Serial Killer was controversial not only for its subject matter but for the fact that The New York Times at first refused to include it on its famous “Bestseller List.” The book, which was released in January 2017, quickly soared to #3 on Amazon’s bestseller list.

Gosnell was financed through one of the most successful crowdfunding campaigns in history, raising $2.3 million in 45 days from almost 30,000 donors. However, not even this was a big enough story to tempt the majority of film critics.

“By refusing to review the film the media are ignoring a historic film about a historic case but also telling thirty thousand people their record crowdfunding is not important and doesn’t matter,” McAleer stated.

He added: “It’s not surprising that no one [trusts] the media anymore.”

Anticipating a second media blackout, the producers depended on social media, grassroots marketing, alternative and conservative media, and word-of-mouth to promote their film.

Given the film’s success this weekend at the box office, it may force the mainstream media to acknowledge its existence. Speaking of the blackout, McAleer said, “In politics there’s a term for this: voter suppression: a sad attempt to pretend our film isn’t in theaters across America this weekend.”

“But they can’t ignore the box office numbers. We humbly thank all of our fans across the country for this great opening. The people have spoken!”