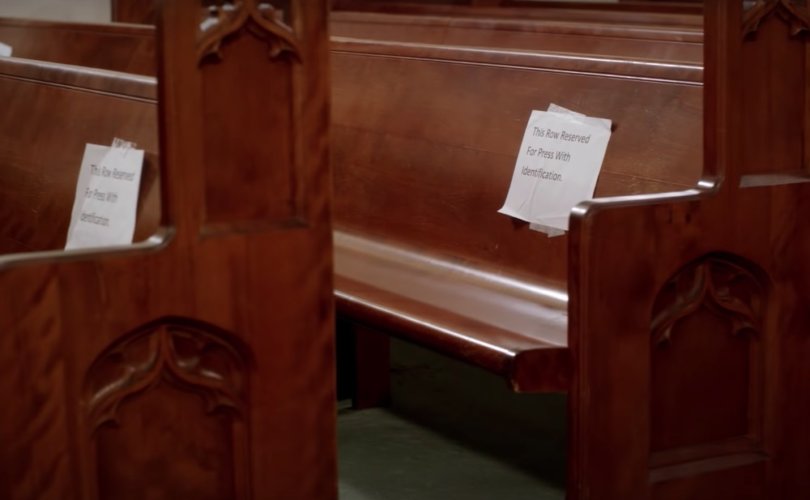 Empty seating at Kermit Gosnell's trial, as depicted in the 2018 film.YouTube screenshot

October 24, 2018 (LifeSiteNews) – The co-producer of Gosnell: The Trial of America's Biggest Serial Killer is firing back against the New York Times over the prestigious newspaper's alleged reneging on ads and refusing to review the film.

Gosnell depicts notorious Philadelphia abortionist Dr. Kermit Gosnell’s arrest, trial, and conviction for the first-degree murder of three born-alive babies and the involuntary manslaughter of patient Karnamaya Mongar. It’s based “very heavily on actual court transcripts,” “dozens of hours of interviews” with Gosnell himself, and the grand jury report.

The film has earned rave reviews and a strong opening weekend performance, but is currently fighting efforts by theaters and the mainstream media to obscure it. Phelim McAleer, an investigative journalist who produced the film with his wife and fellow journalist Ann McElhinney, says the New York Times is not only refusing to cover the film but misrepresenting its own actions in doing so.

“The paper had agreed to carry a quarter page advertisement for the movie” that criticized the paper for never reviewing it, a press release said Tuesday, “but advertising executives demanded it be changed to misrepresent the facts after facing pressure from colleagues in the film section.” An ad executive from the paper claimed it wouldn’t accept the critical ad because Gosnell “was actually never submitted to us” for review.

The film’s team responded by noting two separate occasions on which the Times was offered the film to be watched and reviewed, at which point the press release says the Times “changed its position and demanded that the advertisement simply state ‘The paper did not review the film.’”

“They did not review it and are now trying to rewrite that history – first by lying and then by obscuring the facts. This is unacceptable,” McAleer said. “It's shocking that they wanted to force me to lie about how they refused to review the film – I think the readers of The New York Times expect better.”

McAleer argues the actions of outlets like the Times are ideologically motivated.

“We have already had a number of people state on social media that the film has moved them from pro-choice to pro-life,” McAleer added. “This alarms the pro-abortion establishment and it's why they are trying to shut the film down.”

The New York Times’ handling of the film is just the latest example of what its creators call a concerted effort to suppress it.

Every major Hollywood distributor rejected Gosnell, forcing producers to rely on crowdfunding. Judge Jeffrey Minehart, the trial judge in the case, tried to block both the film and book with a defamation suit. NPR objected to advertising text that referred to Gosnell as an “abortionist.” Planned Parenthood successfully pressured at least one venue to cancel private screenings. Facebook has rejected numerous advertisements for the film.

Most recently, McAleer and marketing director John Sullivan have raised concerns about almost 200 theaters dropping the film without explanation, as well as reports of theater staffers actively discouraging and preventing customers from buying tickets.

Gosnell grossed $1,235,800 over its opening weekend, during which it was the most successful independent release and 12th overall at the box office. It currently enjoys a 98% audience score on Rotten Tomatoes, based on more than 1,200 user ratings.