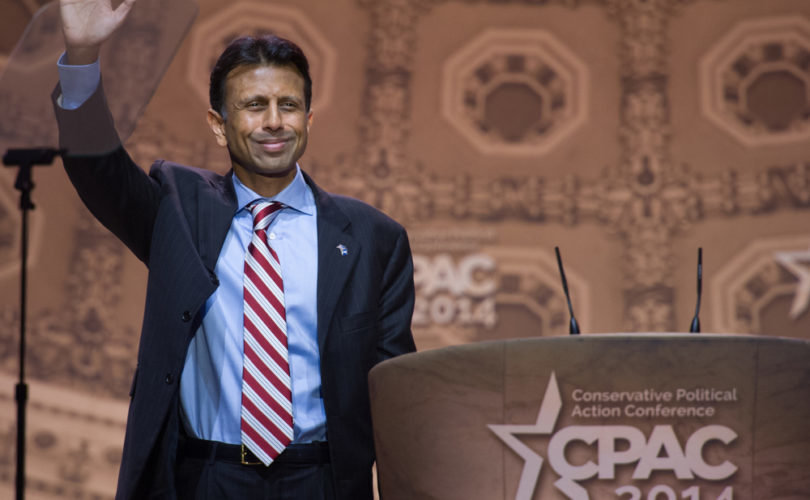 BATON ROUGE, LA – Gov. Bobby Jindal has signed another bill into law aiming to protect unborn children, this one requiring pregnant mothers considered “brain-dead” to be kept alive if it could save their child.

H.B. 1274, which was introduced by Democratic Rep. Austin Badon, became law on Monday with Jindal's signature. It requires that a pregnant woman considered “brain-dead” under Louisiana law be kept alive if “an obstetrician who examines the [pregnant] woman determines that the probable postfertilization age of the unborn child is twenty or more weeks,” and if the mother's life “can reasonably be maintained in such a way to permit the continuing development and live birth of the unborn child.”

Rob Tasman, spokesperson for the Louisiana Conference of Catholic Bishops (LACCB), told LifeSiteNews that the bill was brought forward because of concerns related to the Marlise Munoz case in Texas.

Munoz was pronounced brain-dead after collapsing at her house. Her husband tried to take her off of machines that were keeping her and their unborn child alive, but was resisted by the hospital because of a Texas law requiring they keep pregnant, “brain-dead” women alive. A judge eventually ordered the hospital to take Munoz off of care, at which point she and her baby passed away. Munoz did not have a living will.

Rep. Badon “approached us during the session. He was concerned that state policy should be consistent across-the-board,” Tasman said.

According to the text of the bill, “it is the policy of the state of Louisiana that human life is of the highest and inestimable value through natural death.”

According to Dr. Paul Byrne, an outspoken opponent of the current legal definition of brain death, the new Louisiana law is an improvement on current law, but is still inferior to the moral standards medical professionals should practice. “It's evil to do anything that allows for the imposition of death according to the weak and ambiguous standard of 'accepted medical standard,' which is what is applied in the declaration of brain death in all U.S. states,” Byrne told LifeSiteNews.

Louisiana law defines death as when a person “has experienced an irreversible cessation of spontaneous respiratory and circulatory functions,” but when “artificial means of support” do not allow for the determination, it states a person can be taken as dead upon “an irreversible total cessation of brain function.”

Even modified hospital policies, however, must include “an opinion by a second physician, not a member of the transplant team, as to the candidacy of the person for the process of organ donation.”

Rep. Badon told LifeSiteNews that under H.B. 1274, only a living will or other legal directive specifying DNR while pregnant “would supersede what any doctor says.”

“My emphasis for this bill was to give a voice to the unborn children and save babies. As a legislator, I look at what-ifs and try to create laws that anticipate what could happen. This situation arose in Texas, and most people probably never considered it, or thought about it, but that case in Texas could very well have happened in Louisiana.”

Badon said that opponents of H.R. 1274 often cite the rights of a husband and family to make decisions, but he noted that those arguments assume “the family is of one accord,” and that neither spouse is estranged. Furthermore, says Badon, “last time I checked, you don't have to be married to get pregnant.”

“Do we really want to pull the plug on a brain-dead mother and kill her healthy child,” asked Badon, who said that numerous potential complexities were addressed by the new law.

“So, in order for us to not even get to that point, you have this bill, which aims to eliminate ambiguity. Should a mother with a living will that does not include her unborn child be injured, but it's clear that she wanted to have that child, this bill eliminates that ambiguity.”

Tasman told LifeSiteNews that the LACCB “agreed with [Badon] that having a pro-life policy across the board is consistent with the teachings of the Louisiana Conference of Catholic Bishops.”