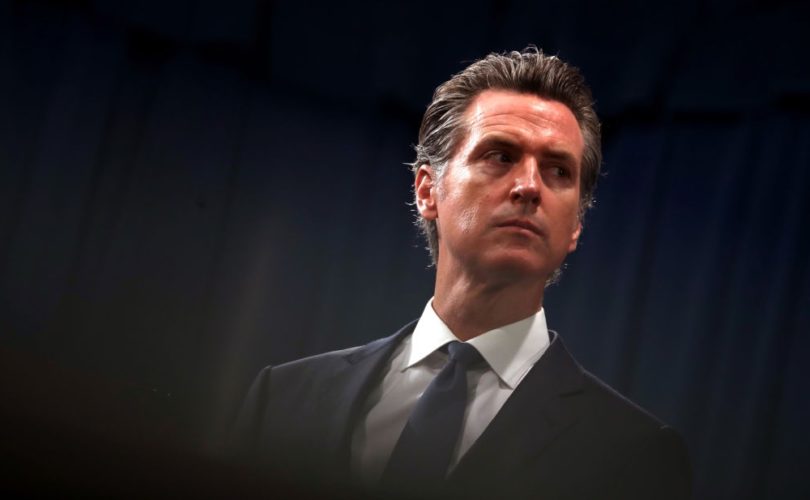 SACRAMENTO (LifeSiteNews) – California Democrat Gov. Gavin Newsom signed into law Thursday a bill which pro-family advocates say claims custody of every child in America for the purpose of gender “transitioning.”

The Sacramento Bee reports that Democrat state Sen. Scott Wiener’s SB107 forbids doctors in the Golden State from releasing medical information on out-of-state children receiving gender “treatments” to investigators from their state of origin, forbids police from arresting anyone for violating other states’ laws against transitioning minors, and empowers courts to assert custody jurisdiction over gender-confused children from other states who have been taken to California for transition purposes.

“In California we believe in equality and acceptance,” Newsom declared. “We believe that no one should be prosecuted or persecuted for getting the care they need — including gender-affirming care. Parents know what’s best for their kids, and they should be able to make decisions around the health of their children without fear. We must take a stand for parental choice. That is precisely why I am signing Senate Bill 107.”

But opponents argue the bill is more likely to be used against the wishes of parents.

Previously, judges could defer to other states if it is more appropriate for that state to make the determination. But this new law essentially makes California a sanctuary for one parent who wants to take away a child from another parent in order to have him or her chemically or genitally castrated.

By signing SB107, Newsom has “awarded himself custody of every child struggling with gender dysphoria, elected himself governor of every state to thwart their own laws that might protect children from harmful & sterilizing gender ‘transitions,’ and dared the entire nation to do anything about it,” says Family Policy Alliance president and CEO Craig DeRoche, who calls on Congress to “seriously consider this attempt to thwart the good – and sovereign – work of lawmakers in other states to protect children from irreversible harm.”

BREAKING: CA Gov @GavinNewsom just signed #SB107 into law, which allows CA to take custody of children from around the nation in order to perform gender “transition” procedures on them, even against their parents’ wills.

Our statement on the #CaliKidnappers law below ⬇️

“In signing #SB107 he awarded himself custody of every child struggling w/ gender dysphoria, elected himself gov. of every state to thwart their own laws that might protect children from harmful & sterilizing gender “transitions,” & dared the entire nation to do anything about it

“No longer can Americans stay silent. Lawmakers around the country must rally together to protect the children in their state from falling victim to Newsom’s kidnapping scheme. #CaliKidnappers

We are grateful for the work of our state ally @CAFamily in opposing #SB107 and join in their call on Americans around the nation to take a stand. #CaliKidnappers

The following statement may be attributed to CFC President @JonathanKeller:

“Mothers and fathers in every state should demand their elected representatives push back against this unconstitutional assault on parental rights. Governors and legislators must defend their citizens against this out-of-control government in Sacramento.”#SB107 @JonathanKeller

Studies indicate that more than 80% of children experiencing gender dysphoria outgrow it on their own by late adolescence and that even full reassignment surgery often fails to resolve gender-confused individuals’ heightened tendency to engage in self-harm and suicide, by reinforcing their confusion and neglecting the actual root causes of their mental strife.

On top of those issues, experts outside the medical establishment further warn that surgically or chemically reinforcing gender confusion imposes irreversible harm on children such as infertility, impairment of adult sexual function, and reduced life expectancy, as well as the psychological toll of being “locked into” physical alterations regardless of whether they change their minds when they mature, as attested to by many individuals who “de-transitioned” back to their true sex.

SB107 is just one of a litany of extreme left-wing laws recently enacted by Newsom, who many speculate may run for president in 2024 in place of an increasingly-struggling Joe Biden. Others include measures to allocate over $200 million in new abortion funding, recruit new abortionists to the state, ensure that almost no abortion will be prosecuted, and potentially even decriminalize infanticide.