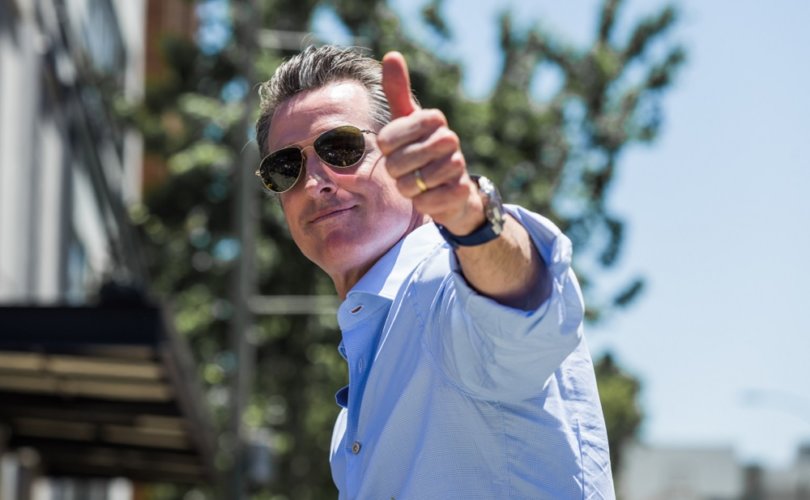 “California has been a leader in protecting access to sexual and reproductive rights, but as we’ve seen recently with unprecedented attacks on these rights, we can and must do more,” Newsom said in a statement.

One of the bills will make it easier for minors in California to hide abortions and transgender procedures from their parents.

The second bill will slap new restrictions and penalties on pro-life activists in the Golden State who engage in protests outside abortion clinics.

Making oblique reference to Texas’ life-saving Heartbeat Act which bans most abortions in the Lone Star State, Newsom said “these are dark days,” and promised to make sure California is a “reproductive freedom state.”

Newsom delivered on his promise to further enshrine abortion “rights” in California with the two bills signed Wednesday.

One of the bills, A.B. 1184, effectively allows anyone still on their parents’ health insurance, including children, teenagers, and young adults up to age 26, to conceal “sensitive” medical procedures including abortions, puberty-blockers, and cross-sex hormones, from parents or guardians, CBN News reported.

The bill was authored by Democrat state Assemblyman David Chiu of San Francisco, and sponsored by Planned Parenthood Affiliates of California.

CBN News reported that under existing California law, minors age 12 and over can already legally give consent to all such services under certain conditions, and minors can obtain abortions regardless of age.

A.B. 1184 broadens current law by forbidding healthcare providers from requiring approval by insurance policy-holders for medical procedures scheduled by anyone included on the insurance plan.

According to the language of the bill, A.B. 1184 will “prohibit a health care service plan or health insurer from requiring a protected individual, as defined, to obtain the policyholder, primary subscriber, or other enrollee’s authorization to receive sensitive services or to submit a claim for sensitive services if the protected individual has the right to consent to care.”

Healthcare workers who violate the new law would be guilty of a crime.

All nine Republicans in the California Senate voted against the radical legislation, unsuccessfully petitioning Newsom not to pass it.

“We should be encouraging parents and family to be involved in their children’s lives, not removing them further from it,” the senators argued in a letter, adding that “[p]arents have a right to be involved in sensitive medical decisions for their young children.”

Objecting to the new law, California Family Council president Jonathan Keller said A.B. 1184 should have made a distinction between minor children and young adults who are over eighteen but still on their parents’ insurance.

“It’s deeply concerning that the Legislature and the governor continue to usurp parental authority,” said Keller. “Parents should be consulted before their minor children are given life-altering medical treatment.”

Ensuring minors can get abortions without parental involvement was not the only action taken by Newsom to firmly establish California as a pro-abortion state.

Authored by Democrat Assemblywoman Rebecca Bauer-Kahan of Orinda, A.B. 1356 makes it a crime to film within 100 feet of an abortion facility if it is determined that the purpose of the filming is “intimidation.”

As reported by the Sacramento Bee, A.B. 1356 “makes it a crime to post personal information or images of providers, employees, volunteers or patients at reproductive health facilities, punishable by a fine of $10,000 and up to a year in jail.”

“It also would make it a crime to intentionally record, tape or photograph a patient, provider or assistant within 100 feet of the entrance to such a facility with the intent to intimidate,” the report continued.

According to the language of the bill, A.B. 1356 will “prohibit a person, business, or association from knowingly publicly posting, displaying, disclosing, or distributing the personal information, as defined, or image, of a reproductive health services patient, provider, or assistant, as defined, without that person’s consent and with the above-specified intent.”

Further, the language states that “[t]his bill would make it a crime to post personal information or an image of a provider, employee, volunteer, or patient and would increase the penalty to either imprisonment in a county jail for either one year, a fine of up to $10,000, or both that fine and imprisonment.”

According to the Bee, the law is meant to protect abortion facility workers and women going to obtain abortions from “being harassed and intimidated by extremists from the anti-abortion movement.”

Lamenting that pro-life activists are often successful in dissuading women from going through with the decision to abort their children, Bauer-Kahan said the protesters “threaten our patients and our providers and they ensure that some patients don’t receive the care that they’re there to receive.”

As reported by CBN News, one of the groups opposing the bill was conservative legal defense group Pacific Justice Institute, which raised concerns that the determination of “intimidation” might be arbitrary or based solely upon the perspective of the alleged victim.

In a letter to lawmakers, the institute warned that “[s]pirited debate must not be punished or stifled by merely re-labeling it as intimidating or threatening, based on the viewpoint of the speaker.”

The pro-abortion governor said he was “proud” to sign the legislation punishing pro-life advocates and enabling minors to obtain abortions without parental knowledge.

“I applaud the establishment of the California Future of Abortion Council and look forward to its important work to advance our state’s leadership on this vital issue. I’m proud today to sign these two bills that demonstrate our dedication to strengthening and further protecting access to reproductive health care services in California,” Newsom said.

The new measures passed into law last week are some of the latest radical policies to be enacted by the governor after surviving a recall election earlier this month.

Two weeks ago, Newsom signed new legislation banning most single-family zoning in the state, a move which some have said amounts to an abolition of the suburbs.