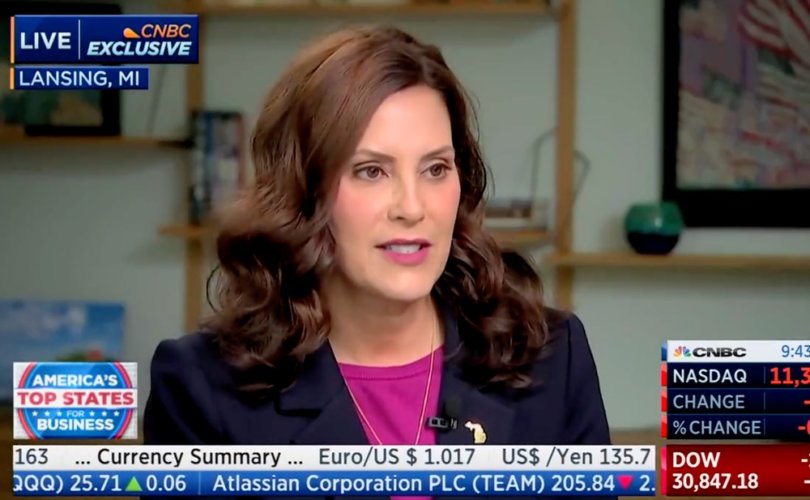 (LifeSiteNews) — Michigan’s radically pro-abortion Democratic governor on Wednesday reaffirmed her commitment to defending legal abortion in her state, characterizing the ability to kill unborn babies as “a great part of [Michigan’s] legacy.”

In a July 6 interview with CNBC, Gov. Gretchen Whitmer responded to questions about abortion access in her state by saying she “would love to be able to pitch Michigan as the place where every person has full civil rights, full bodily autonomy and the ability to make a good quality of life here in Michigan.”

Whitmer, who imposed some of the harshest COVID-19 lockdowns and restrictions in the United States during the coronavirus epidemic, said that abortion falls under the state’s commitment to “civil rights,” “bodily autonomy,” and the ability of residents to create a “great quality of life.”

According to Whitmer, abortion access is “a great part of our legacy, and it’s got to be a part of our future.”

Earlier in the interview, the pro-abortion governor said that while abortion is “legal and safe” in Michigan, the situation is “precarious.”

Michiganders can still kill their unborn babies in the state thanks to an injunction against a 1931 pro-life trigger law that would have made abortion illegal in the state after the U.S. Supreme Court’s decision to overturn Roe v. Wade, she noted.

Less than two months before the court rolled back the federal “right to abortion” established in Roe, a Michigan judge issued a preliminary injunction against the state’s 91-year-old pro-life law.

READ: Michigan court blocks enforcement of 1931 abortion ban that would take effect if Roe is overturned

The pre-Roe law had made it a felony to commit abortions except to save the life of the mother, and banned the advertisement or sale of abortion-inducing drugs.

Whitmer hailed the ruling at the time as a victory that provided “critical relief” for residents of the state.